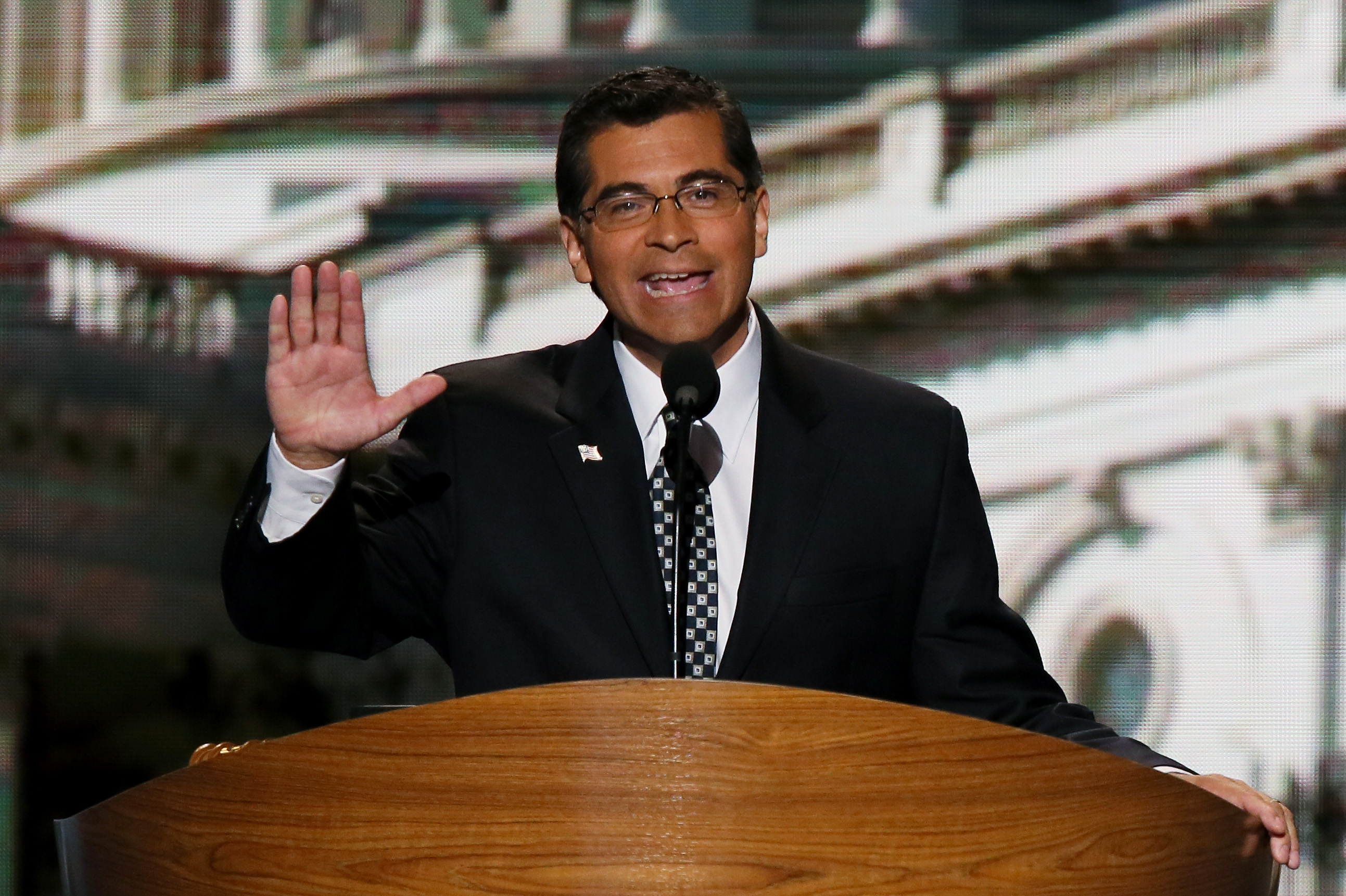 California Attorney General Xavier Becerra has never met Donald Trump in person. When the president visited California earlier this year, he bypassed the state’s capital altogether, instead spending much of his 22-hour trip looking at prototypes for his proposed border wall. Becerra took the opportunity to call him out on Twitter: “@realdonaldtrump, only took ~30 lawsuits to visit world’s 6th largest economy?” he wrote, adding, “Not looking to pick fight but if CA values threatened, ready.”

He has a funny way of not picking a fight. Since Trump’s inauguration, Becerra has filed 35 lawsuits on behalf of his state against the federal government on issues ranging from healthcare to immigration to net neutrality to loan forgiveness for students defrauded by their schools. That’s including two new suits he filed late last week against the EPA over its suspension of protections for agricultural workers and failure to enforce a methane landfill regulation. By the time you finish reading this paragraph, he may have already filed another.

“No one should be surprised,” Becerra told me of the number of lawsuits he’s filed. “We’re going to do everything we can to defend California’s values. These days, it also means protecting those values against attacks from wherever they may come, including Washington, DC.”

Becerra is in an odd position. On one hand, as one of several state attorneys general locked in legal combat with the administration, he’s an important figure in the anti-Trump “Resistance.” But unlike former New York Attorney General Eric Schneiderman, who prided himself as a leading voice against Trump until he abruptly resigned in May after four women accused him of sexual assault, Becarra insists that he isn’t resisting. He’s just protecting California from being hassled.

“My image of someone resisting is the child who doesn’t want to take a bath or doesn’t want to eat the broccoli,” he said. “We’re like Popeye. We ate more spinach than was necessary. We’re doing very well and someone should tell us why we should stop doing it. To me that’s not resisting, that’s leading.”

Since Trump’s March visit, California has moved up in the rankings to be the world’s fifth-largest economy, ahead of the UK, according to the latest federal data. Becerra sees much of his job as defending the policies that got California there.

“To the degree that the Trump manifesto is roll back our progress whether it’s our clean car standards, the way we treat immigrants, or moving towards universal health care, you’re definitely on the opposite side of Donald Trump,” he said. “But I look at that as not because we just don’t want to be where Donald Trump is. We look at it as something that is necessary to defend everything we’ve done.”

His recent legal actions include leading 16 states in suing the Trump administration over a proposed rollback of fuel economy standards challenging the administration’s decision to add a citizenship question to the 2020 Census, arguing the move is unconstitutional and will result in an inaccurate count, according to the complaint.

Becerra has filed friend-of-the-court briefs in many other cases, filed Freedom of Information (FOIA) requests with the Department of Homeland Security and the EPA (after getting no response, Becerra has taken those agencies to court), and has written countless letters, one recently to oppose the Department of Justice’s proposal to stop collecting data on violence against LGBTQ youth.

Earlier this year, Becerra’s office hired more attorneys to handle the workload, which is increasing all the time: His habit has been to respond immediately as issues arise, often giving Trump a heads-up on Twitter. “If the #Trump Administration ultimately tries to open our coasts to new #offshoredrilling, we will see them in court,” he wrote in March.

Moments before he sat down with me for an interview a few weeks ago, he released another, joining eight other state attorneys general in a letter to Scott Pruitt voicing opposition to a new proposal preventing the EPA from relying on research based on confidential medical data to make regulations. Nearly 1,000 scientists recently signed a letter saying that the proposed rule “would greatly weaken EPA’s ability to comprehensively consider the scientific evidence across the full array of health studies.”

“I wanted to be a biochemist when I was a kid,” Becerra told me. “I found out that science was a little harder than I expected. But I did not think that the leaders of our country would not only ignore science, but would try to deny it. For us to ask the head of the EPA, ‘Hey, give science a chance.’ That’s unconscionable.”

Becerra’s father was born in the US and grew up in Mexico. His mother is from Guadalajara, and came to the US when she was 18, right after they married. Becerra, who is 60, talks about the early days when his immigrant parents lived in California and restaurants had signs that read, “No dogs or Mexicans allowed.”

“I’ve never heard my dad utter anything but proud things about this country and what it’s done for him and his family,” Becerra told me. “Yet as a young man he couldn’t benefit from his status as a US citizen. He couldn’t eat at a restaurant, some of the very food that he had harvested with his hands.”

Becerra holds his parents up as an example of what’s possible when doors are open to immigrants. “My parents—a man with about a sixth-grade education who married a woman he brought from Mexico when she was 18—they figured out a way to buy a house, send their kids to college or to the military service, and now they live in dignity in retirement.” They live next door to the home in Sacramento Becerra shares with his wife and three children. “You give people that sense of hope that they can do that and they’ll take care of the rest,” he said. “That, to me, is the American Dream.”

Becerra started his legal career working in a legal services advocating for the mentally ill. He was a deputy attorney general in California from 1987 to 1990, then served 12 terms in Congress representing Los Angeles before being appointed AG in 2017 by Governor Jerry Brown to replace Kamala Harris when she was elected to the Senate. Back in 1993, when he was a freshman member, he made headlines for a shouting match he got into on the House floor with Representative Dan Rostenkowski, a fellow Democrat, when Becerra argued against denying welfare benefits to immigrants. “I was expected to shut up,” Becerra told the LA Times at the time. “But I thought it was an important issue and I didn’t stop talking.” A congressional source told the Times, “Becerra is young and green and he’ll learn.”

When asked about that episode now, Becerra said he still has the same level of passion. “The best word is ganas in Spanish and I would translate it to be not just vigor, but grit,” he said. “Grit and guts and vigor. To me, what’s happened between that experience back in ’93 and today, is a lot of scraped knees. I still have the same vigor, but now I get to complement the vigor with a lot of experience.”

He’s spent most of his career advocating for immigration reform. “I don’t think it’s rocket science what we need to do to resolve a broken immigration system,” he said. Part of that, for him, involves creating path to citizenship for the estimated 11 million undocumented immigrants living in the US. “I think everyone understands that they must come out of the shadows and prove that they are worthy to get to stay and that we have mechanisms in place for border enforcement.” (While many Americans support a path to citizenship and a bill including that feature was supported by George W. Bush during his term, it’s not something that’s on the table in any current legislative talks about immigration reform.)

Most of the cases against Trump are still pending, but so far Becerra has seen 15 victories in court, according to Becerra spokesperson Sarah Lovenheim, including a preliminary injunction to keep the DACA program going. (Some of those victories could still ultimately be reversed.)

“It’s the refusal to adhere to the law,” Becerra said. “The reason we’ve been able to have such success against the Trump administration in court is because we’ve been able to prove that they haven’t followed the law. No one, including the person occupying the White House, is above the law.”

Becerra is facing a primary in June where his opponents have accused him of being too fixated on Trump at the expense of other issues, like the opioid crisis. The California Democratic Party didn’t endorse a candidate for AG; Dave Jones, who’s also running, won a majority of votes but fell short of the 60 percent required for endorsement at the state party convention.

“It is very unusual for a California attorney general to base an election campaign on opposition to a president,” said John J. Pitney, Jr., politics professor at Claremont McKenna College. “Four years ago, Kamala Harris’s reelection campaign focused on customary California issues,” like sex trafficking into the state and gangs.

Becerra disputes that his focus is too much on Trump. “The reality is that only a fraction of the work that the Department of Justice does in California relates to Donald Trump,” he told me, going on to list a litany of recent actions that weren’t connected to Trump: helping to shut down the sex site Backpage.com (“probably the largest trafficker of sex online in the world”), weapons seizures, proposed bail reform, holding an independent investigation into the shooting of Stephon Clark by Sacramento police. Becerra added that the NRA has filed four lawsuits against him, “as I defend California’s gun safety laws that are the most progressive in the nation, and that has nothing—“ he’s about to say “to do with Donald Trump,” but stops mid-sentence. “Well, actually, that might have more to do with Donald Trump given how cozy he is with the gun lobby.”

In his view, the actions against Trump are simply the ones that get the most attention.

“The relationship with the Trump administration is significantly more adverse than it was with Bush,” said former California Attorney General William Lockyer, who went up against George W. Bush on environmental protection and medical marijuana. That’s including “the time the feds threatened to arrest me,” he told me, when he merged files of people buying guns with files of convicted felons and the mentally ill. He said that while some of the lawsuits that Becerra has filed “may be difficult to win, there are meritorious claims that are being made. Often these matters involve an obligation to defend state laws against a federal challenge. It’s interesting to see how state’s rights claims vary with federal administrations. With Obama, Republican AGs sue; Trump, the Democrats.”

Cole Kazdin is a writer living in Los Angeles.