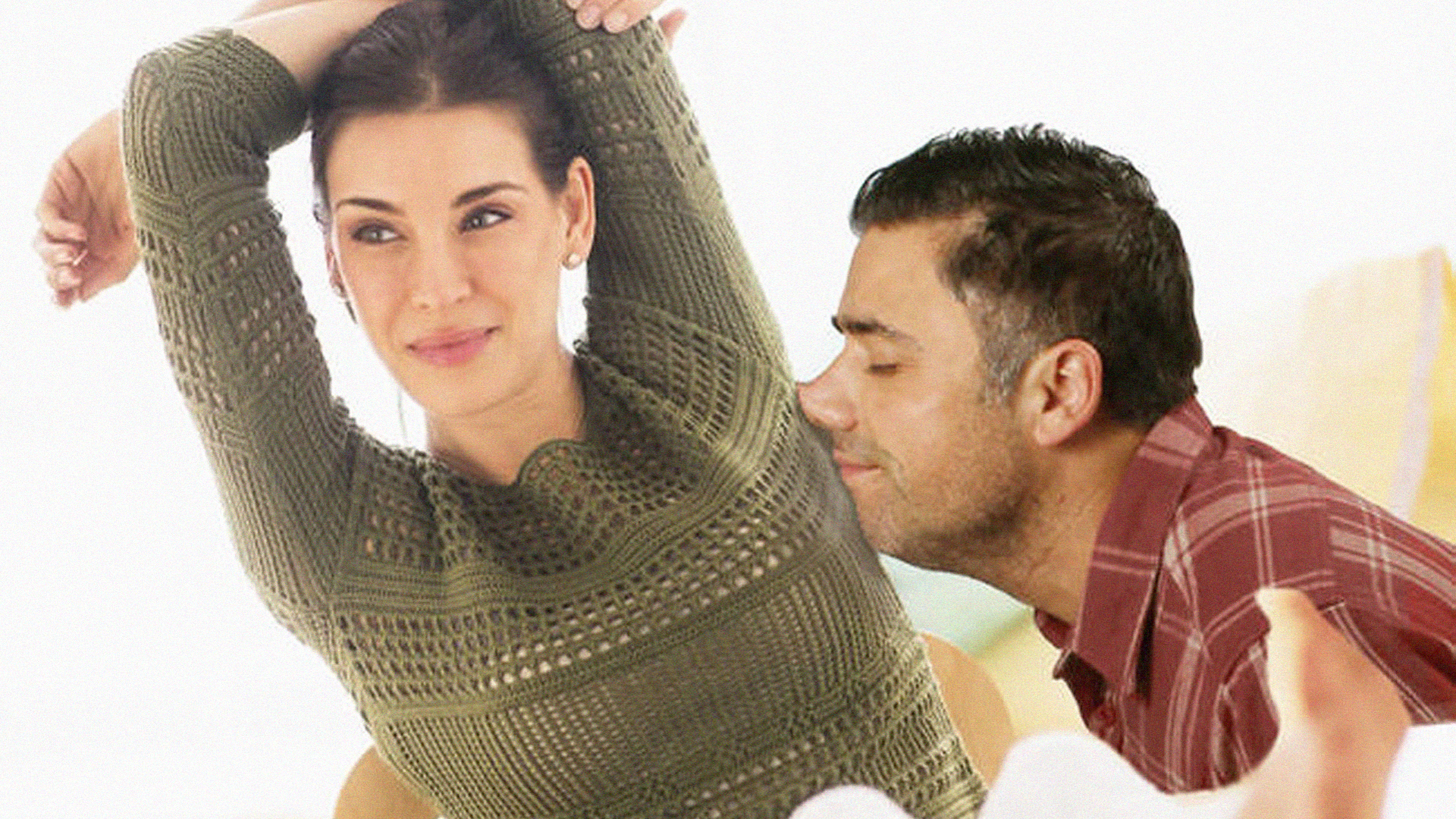 “I’m standing in line the other day having a burrito made and the woman standing beside me in her yoga outfit suddenly starts fixing her hair,” Ryan tells me. “So for probably thirty seconds I got to see this attractive woman’s pits. I thought I was going to keel over right there in the line.”

Ryan, a 48-year-old company exec from the US, is into maschalagnia. In other words, he’s sexually aroused by armpits. He’s not alone either. Tumblr is awash with (mostly NSFW) armpit photo collections, specializing in everything from women to men, amateur to celebrity, India to East Asia. The premier online armpit forum, GirlPits, has been running for over a decade and is nearly 30,000 members strong.

Armpit fetishism doesn’t appear to be entirely niche, yet it’s hardly the sort of kink that most of us would feel comfortable disclosing. As 30-year-old Indian guy Dev told me: “This fetish raises more eyebrows than something more common, like say watersports and golden showers.”

It wasn’t always this way. As far back as 1880, the French poet J-K Huysmans penned an essay The Armpit, which set out “simply to speak of the exquisite and divine scent prepared by the women of our cities, wherever they get overheated.” In his 1914 semi-biographical short story Giacomo Joyce, James Joyce—the most literary of fart fetishists—described the climactic joys of armpit licking while “soft sucking lips kiss my left armpit…from my right armpit a fang of flame leaps out.”

More restrained descriptions of armpit eroticism include an 1899 account from Charles Féré. The French physician outlined the case of a 60-year-old man who would stick his hands under the short-sleeved shirts of unsuspecting women, before walking away and taking a hearty sniff of his spoils. A few years later, British sexologist Havelock Ellis drew upon Féré’s case study in his Studies in the Psychology of Sex to posit that “when personal odour acts as a sexual allurement it is the armpit, in any case normally the chief focus of odour in the body, which mainly comes into play.”

Smell certainly plays a role for many in the maschalagnia community. For Wesley, a straight 38-year-old man from the Netherlands, armpit odour is one of the chief focuses of his fetish. He says that he loves the way in which armpits are so easy to see and to smell. “I like the idea of a woman walking around the beach or in hot weather with sweaty, pheromone filled armpits that I just want to stick my cock in.” Dev is equally attracted to his lover’s odour. “After a shower, my partner smells a certain way, without deo or perfume,” he explains. “Her armpits have a smell as well, slightly stronger than the rest of the body but not as strong as sweat. It’s not BO I’m attracted to, but her smell.”

Dev’s distinction between body odour and armpit pheromones (or, better put, semiochemicals) is key in understanding why a pair of musky pits might arouse the lusty thrusts that Wesley describes. When we exercise, we sweat through endocrine glands, which can end up creating the sort of stench best avoided in an early-morning elevator. However, our underarms produce more than one type of odour.

“One thing that is of particular interest in the armpit region is the presence of apocrine sweat glands,” explains Mark Sergeant, a senior lecturer at Nottingham Trent University who specializes in the psychology of smell and human sexual behaviour. These glands are well-placed to deliver odours, especially during sex, where there’s plenty of possibilities to get intimate around the chest and the neck. We sweat through them when we experience emotions such as embarrassment, stress or pain, but, as Sergeant outlines, that’s not all. “The apocrine glands are activated in response to mental/emotional states, potentially including sexual arousal.”

Wesley and Dev’s inclination for an armpit sniff might make sense in biochemical terms—it possibly enables better unconscious communication that their sexual partner is in the throes of passion. Nonetheless, semiochemical research in humans is inconclusive—there’s perhaps a broader social context to their kink. We live in an age of aggressive beauty product marketing, where deodorant is rampantly promoted as a shortcut to wild sex. If no spray means no lay, it’s hardly a surprise that so many of us suppress our natural pheromones. The taboo has erotic appeal and in a sea of artificially perfumed bodies, that elusive apocrine gland scent sits on a rarefied throne.

Of course, there’s more to armpits than funky odours. Ryan has no interest in sweat or smell. Instead, he’s attracted to the wrinkles of underarm skin and the texture of armpits. “I like dark haired women that have a little bit of brown or black pit stubble,” he says, before describing the intellectual appeal of a stubbly pit. “I don’t really care for bushy man-pits on a woman, but it seems to me that a woman with some hair under her arms it certainly expressing some cultural rebellion via her armpits.” For Ryan, this suggests that she’s more aware of and engaged with her body. “There’s something about a woman who is comfortable enough with herself to say ‘fuck you’ to such an ingrained societal norm that I find very attractive.”

Anyone who’s seen a women’s cosmetics ad will be fully aware that smooth, shaved skin is an established standard in the West, even within apparent body positive campaigns. That unrealistic source of sexual expectation, internet pornography, is also likely to feature hairless women. One study from 2005 suggested that 99 percent of British women remove at least some hair from the underarms, legs, pubic area, and/or eyebrows. Depilating armpit hair is a trend to the point that friends, lovers and colleagues are likely to shame a woman for not doing so. Those who subvert this trend show a streak of independence that may be hard to come by, and which Ryan celebrates.

This celebration isn’t always easy. Ryan had one girlfriend who was aware of his fetish and was cool with giving him free access to her unshaven pits. Aside from this, he’s mostly got close to armpits during sex, but without actually disclosing his interest. “Some have reacted oddly, more out of fear that they smell funky.” Ryan is keen to emphasise the nature of his underarm sexual experiences. “I’m talking about tender, sensual licking, not like an armpit popsicle,” he says. “I do fantasize about fucking an armpit though.”

One man’s fantasy is another man’s oily reality. Wesley is pretty matter-of-fact about how he raises his kink. “I just start oiling them up and massaging them all over with my cock,” he states. “Then I try to fuck various crevices, between knees, between legs, feet, then go up to armpit and fuck that as well. It all has to evolve naturally.” To date, his partners have had no issues with this. As for the act itself, Wesley tells me that it’s essential to avoid friction by removing the bra and lubricating beforehand. “An oiled, tight armpit feels pretty nice if she squeezes it good.”

Dev’s sexual experiences lay somewhere in the middle. He’s engaged in varying degrees of armpit sniffing and licking, with a keen focus on consent and comfort. “I might start subtly by lifting her arms over her head while having sex,” he explains. “Kissing around the general area to see how she reacts. If she’s comfortable with it, I tell her.” In the past, Dev has avoided bringing up his kink with lovers who had body image issues with their armpits. His current partner is intrigued by his interest and he hopes to develop it further with her.

Regardless of any private success in the bedroom, an everyday armpit aversion persists. “People are really weird about armpits. So much so that magazines airbrush models’ pits so that they look perfectly smooth, like plastic on a Barbie,” Ryan suggests. When you look at it this way, our obsession with squeaky-clean, toy-doll armpits is pretty bizarre indeed.

Sign up for the VICE Canada Newsletter to get the best of VICE Canada delivered to your inbox daily.