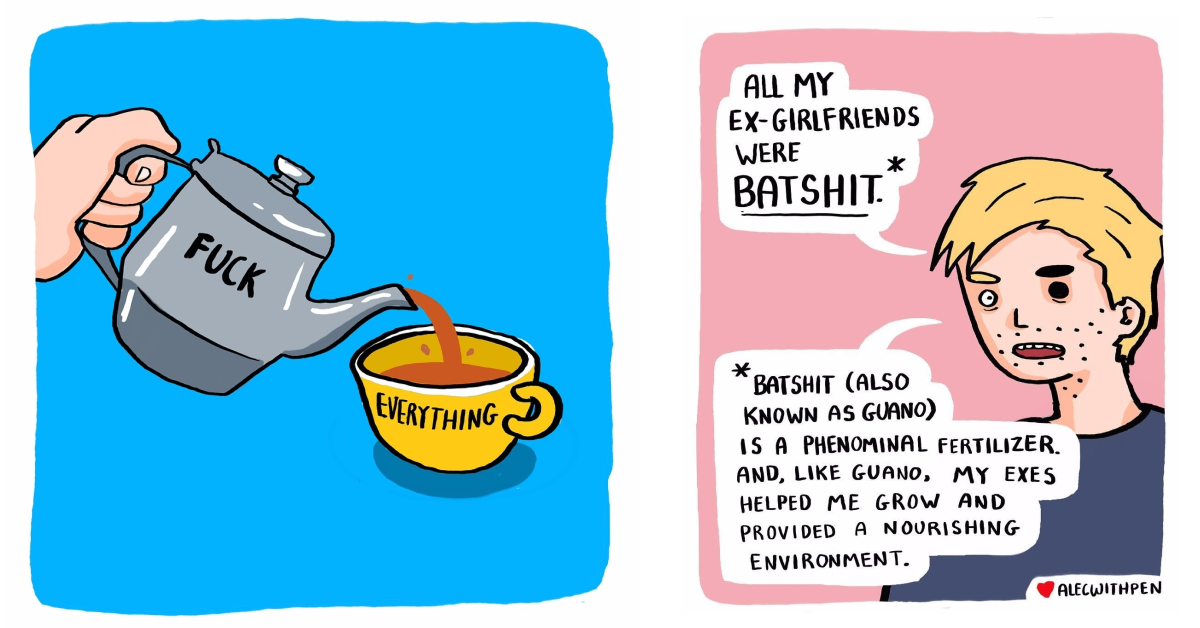 There’s nothing intrinsically funny about battling anxiety and depression, but Alec McDonald—the man behind the Instagram account @alecwithpen—says his path to comedy was coloured by having, what he calls, a “bad brain.”

“After flirting with medication for my clinical depression for a couple years,” he told VICE, “I finally sucked up my pride, realized the brain I was issued at birth had faulty wiring, and decided to try to fix it with something other than workaholism, jokes, self-loathing-as-anesthetic, and ‘fun with friends’—all increasingly inadequate remedies or distractions.”

When McDonald started taking Lexapro, he landed somewhere between the Garden of Eden and the Fifth Circle of Hell—at once invigorated and immobilized. “It was like a very condensed second round of puberty, but with 100 percent less boners,” he said. Recalibrating his brain made McDonald long for a way to feel in control of his own existence, “like I was participating in my life.”

He’d been doodling since he was a kid, but the joy he’d once found in illustrating withered in adulthood. But one day, during a therapy session “while losing [his] mind on Lexapro,” McDonald’s doctor suggested he go home and draw himself—something he’d never done before.

“So I went home and drew 1,000 versions of myself, trying to find a caricature that didn’t make me squirm. And I did. I found one. I bought these big sketch pads and a bunch of fancy pens and sat in coffee shops for two weeks straight, obsessively documenting how I felt—NOT GOOD—from day to day.”

McDonald likens his initial self-portraiture as somewhat “self-involved and vaguely incestuous, like catching a glimpse of yourself in the mirror during sex.” But it also inspired personal revelations. “[Drawing] allows me to look at myself,” he says, “and to fight my lifelong reflex to not sympathize with myself.”

Living with mental health issues like anxiety and depression often compound nasty feelings of self-loathing. McDonald found that his illustrations—at once facetious, hilarious, and tragically on-point—served as a way to “be a friend to myself when I was suffering.”

“Having depression and chronic anxiety is, to put it clinically, extremely ass. It’s not glamourous or dramatic or what Lost In Translation is about. It’s gross and shitty and awful and boring,” he added. “But, it’s also fucking funny. I mean, when you’re laying on your never-washed Ikea carpet waiting for the energy and/or courage to type a burrito order into your Seamless app, it’s hard not to find that funny. Not at the time of course. At the time you feel like Chris Christie is sitting on your chest, spit-shouting insults in your face.” Though it takes a certain cocktail of self-awareness and a morose funny-man mentality, McDonald found catharsis in naming his experiences and giving himself the gift of self-sympathy and understanding.

McDonald’s comics are wide-reaching and strike a nerve many people preserve for their own self-abasement. “For my entire life, my impulse was to keep my uglier feelings private,” he said. “But having this platform where I can air out my gross, fetid inner life to people who feel the same—or at least think it’s funny—lets me feel a new sort of ownership over my problems.”

It’s clear from the gratitude-filled DMs McDonald gets from his followers that they feel similarly. But the artist is still hesitant to take credit for being the voice of a community. “It feels weird for me to pat myself on the back for that, because I don’t totally believe it. What I am okay taking pride in is that I think I’ve carved out a tiny little corner of the internet for me and some people like me to tell a certain style of jokes about feeling like shit all the time.”

McDonald is a comedian by profession, which should come as no surprise to anyone who’s perused his feed. Through humor, he’s captured extremely relatable snapshots of his personal struggle with mental health. And by putting himself in conversation with his neuroses, he’s opened a door for others to do the same.

And beyond the toil of navigating the middle ground between self-acceptance and self-loathing, McDonald has a thing for making people laugh. He finds a real profundity in sharing humour with friends and strangers, IRL or on the internet. “Like, you know when you’re walking down the street, and you see a group of friends, and you hear them being as fun and funny as your friends? And you’re like, ‘How can there be cool, funny people that I don’t know, and will never know, just roaming the world?’ It kind of annoys me actually,” McDonald said. “Unless they follow my Instagram. Then I like it.”