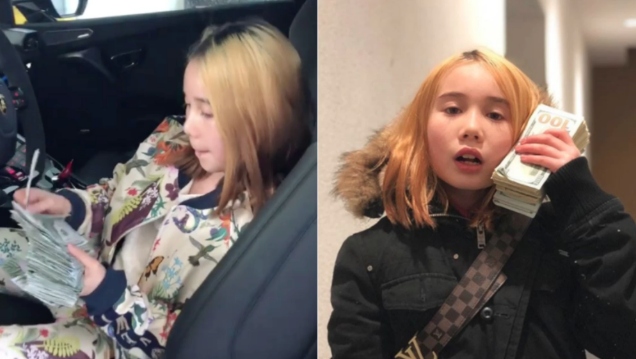 Prepubescent viral sensation Lil Tay is known for Instagram videos in which she brags about being rich af—but those videos have vanished off her social media accounts.

The nine-year-old’s YouTube and Instagram accounts, which have 211,000 and 2.4 million followers respectively, have been scrubbed of all content. Tay’s videos are reportedly orchestrated by her teenage brother, Jason Tian, who on Sunday tweeted, “Don’t worry! Me and my sister and going to change up our whole image for the better! We boutta come back stronger then ever.”

Last week Jason Tian tweeted, “My Instagram got terminated. All you haters that reported me for no reason, y’all are just jealous that I have more clout then (sic) you.” Tian’s mother Angela was a Vancouver real estate agent until she was forced to quit after using her boss’ car and unsold properties in Lil Tay’s videos.

VICE recently reported on a video that surfaced on WorldStarHipHop last week and showed Lil Tay smoking from a hookah pipe. Other videos have shown her revving up the engines to luxury cars, flashing $100 bills, and swearing like a truck driver. Both she and her brother have also dropped the n-bomb. Her viral fame has sparked much controversy; child psychologists who spoke to VICE said Lil Tay’s online footprint may haunt her later in life.

In an interview with Good Morning America, Lil Tay claimed she had moved to Hollywood. However videos in which she claimed to be in Beverly Hills were later shown to have been filmed in parts of Vancouver.