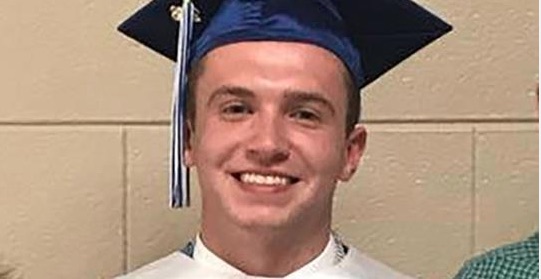 It’s high school graduation season, a time for teens to pull wild senior pranks, prepare to burden themselves with an ungodly amount of student loan debt, and, of course, don caps and gowns, walk across the stage, and collect their diplomas. But one valedictorian took the opportunity to pull a political fast one on his heavily Republican community in Kentucky.

Ben Bowling gave his graduation speech Saturday at Bell County High School in Pineville, the seat of a county where Trump pulled in 82 percent of the vote in 2016, as the Washington Post notes. And for a while, the crowd was behind him.

“This is the part of my speech where I share some inspirational quotes I found on Google,” he said. “The first: ‘Don’t just get involved. Fight for your seat at the table. Better yet, fight for a seat at the head of the table’: Donald J. Trump.”

The audience erupted. Bowling’s fellow students and their parents clapped, while a few folks whistled. Some even screamed.

“I’m kidding, I’m kidding,” Bowling said over the roar. “That was Barack Obama.”

The crowd went quiet. One man let out a low “boo.” And a few people, who presumably weren’t huge Trump fans, just laughed.

The quote comes from a commencement speech Obama gave in 2012 at Barnard College, where he also made a case for combatting climate change and a woman’s right to choose. In an interview with the Louisville Courier-Journal, Bowling didn’t say if he was trying to send any sort of message by quoting the speech—only that he liked Obama’s line.

“I just thought it was a really good quote,” he said. “Most people wouldn’t like it if I used it, so I thought I’d use Donald Trump’s name. It is southeastern Kentucky after all.”

In a few months, Bowling will head off to the University of Kentucky, according to the Courier-Journal, where he plans on studying biology, gearing up for a career in medicine—and, presumably, finding other creative ways to get Trump fans to own themselves.