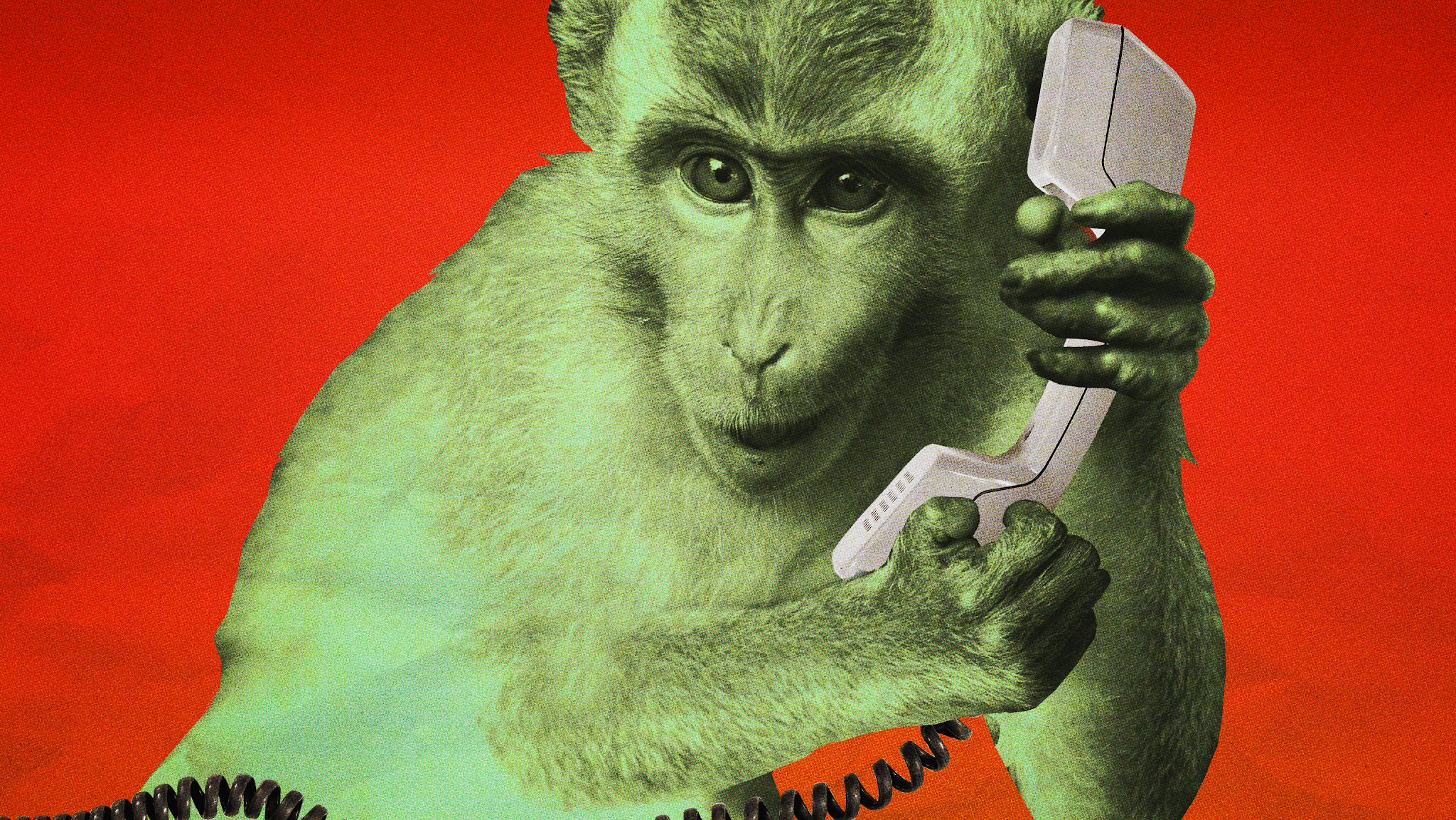 In 1930, British economist John Maynard Keynes predicted that by the end of the 20th century, first-world countries like the United States would—or should—have 15-hour workweeks. Why? Largely because technology could take mindless tasks off our hands. Of course, that never happened. Instead, countless people across the world are stuck working long shifts as corporate lawyers, clerical workers, consultants, telemarketers, and more.

But while many of us might think our jobs suck, some gigs are actually pointless, according to anarchist writer David Graeber. In his new book, Bullshit Jobs: A Theory, the author argues that humans all too often get stuck spending their lives doing meaningless work. The American-born Graeber, whose previous books include Debt: The First 5,000 Years and The Utopia of Rules, teaches at the London School of Economics. He’s a professor of anthropology and was one of the most well-known voices of the Occupy Wall Street movement (he’s credited with coining the phrase “We are the 99 percent.”).

VICE recently caught up with Graeber to talk about what defines a “bullshit job,” why people working jobs of societal value typically get paid less, and how a guaranteed basic income could solve this whole cluster-fuck.

VICE: So what are bullshit jobs, and why do they exist in the first place?
David Graeber: Basically, a bullshit job is one where a person doing a job secretly thinks it’s either completely pointless or does not produce anything. And, also, if that job disappeared, the world might even be a slightly better place. But the worker can’t admit that. Hence the bullshit element. So it’s essentially pretending what you’re doing is worthwhile, but it’s not.

Lots of things came together in creating this strange, fucked situation. One of them is the general philosophy that work—no matter what—is always good. The one thing that the political left and right often both agree on is that more jobs are always a solution to any problem. They don’t say “good” jobs that actually do something. So when you’re a supply-side conservative saying we need to give tax cuts to job creators, you don’t talk about what kind of jobs you’re hoping to to create. And then there’s the left-wing person talking about how we need more jobs to support hardworking families. But what about families that just work moderately hard? Why not help them, too?

But even bullshit jobs provide income for people to survive on. Why is that such a bad thing in the end?
So, the question is, if society has the means to support all people, which it does, why is it that we insist that workers sit there filling in a hole and then digging it out all day? It doesn’t make a lot of sense, right? In social terms, it seems like arbitrary sadism.

In individual terms, it can seem like a fine deal. But, really, these people in these jobs are miserable. You’d think, “Here I am getting something for nothing,” right? Well, these guys who are paid nice, often executive-level salaries, certainly middle-class level salaries with benefits, often basically get to sit around all day playing a computer game or updating their Facebook profile. Or maybe answering a phone twice a day. They should be happy as clams, right? But they’re not.

People regularly report that they’re depressed from doing these jobs. And they will scream and bully each other and freak out about deadlines because they are so rare. And, yet, if they could see a common purpose in the workplace, a lot of that would fade away. The psychosomatic illnesses that people were having just vanish the moment they get assigned a real task, or they quit and get a real job.

You write that society puts pressure on college students to seek out arbitrary work experience, and the purpose of that is to teach them how to pretend to work.
It’s interesting. Real work is when the worker accomplishes something. So if you’re a student, you write papers. You prepare projects. If you’re a science student, you do lab stuff. You take exams. You’re driven by the result, and it’s up to you to organize your work in the most effective way to come up with a result.

And, yet, these jobs that they make students do actually usually involve doing nothing. They sit there and pretend to look busy, pretend to be careful as they work as a cashier at the student union, or to stock shelves when there’s nothing to do. Often, they’re administrative jobs where they just sit there and rearrange papers all day. So, in fact, you’re teaching people how not to complain and understand that once you get out of college, you’re no longer judged by the results but your ability to follow orders, basically.

What about some tech and media jobs? Do you see bullshit there?
Sure. I solicited stuff on Twitter, and I asked people to send me accounts of their most pointless jobs, and I got hundreds of responses. There was one guy, for example, who designed banner ads on webpages. He said that they actually had data which says that nobody ever clicks on this shit. So they had to cook the books to make it seem to their clients that they made impressions, so as to give people the idea that it wasn’t pointless.

In the media, here’s an interesting example: in-house magazines and newspapers for large corporations. There are people involved in producing this stuff that basically just exists to make the executives feel good about themselves, and no one else looks at this stuff.

Automation is often viewed as a negative thing for society, but you disagree, right?
That’s right. I just don’t understand it. Why would we not want to eliminate unpleasant jobs? Back in 1900 or even 1950 or whatever, when people imagined the future, they thought, Oh, people will only be working 15 hours a week. It’ll be great because we’ll have robots doing the stuff for us. Now, we’ve turned it around and said, “Oh no. The robots are coming for our jobs.” In part, this is because we can no longer imagine what we’d even do with ourselves if we had a reasonable amount of leisure time.

And, I mean, why are people acting like the prospect of eliminating unnecessary labor is a problem? You’d think an efficient system would be one that would say, “OK, we have less demand for labor. We have more stuff. We’ll redistribute the necessary labor in an equitable way, and we’ll figure out how to get the stuff to people.” Why should that be so hard? If people just assume that’s completely impossible, it strikes me that we don’t have an efficient system.

One of the most interesting things in the book was your riff on how jobs that provide social value typically pay less than bullshit ones.
For me, personally, it was one of the great shocks when I was doing research. I started looking to see if any economist ever looked into this and tried to explain the phenomena. And, in fact, there have been a few economists. Some of them were leftist economists, but some of them weren’t. Some were straight mainstream economists.

They all come to the same conclusion, though: Overall, there is a general tendency that the more social benefit a job provides, the less you tend to get in compensation. And, also, dignity, respect, and benefits. That’s kind of amazing. And there are a few exceptions. Really, the exceptions aren’t quite as exceptional as you’d think. Doctors, of course, are the big one. It is definitely true that doctors are paid fairly well and provide social benefits.

Anyway, there’s this argument that says, “Well, you wouldn’t want people who are just interested in money teaching our children. We shouldn’t pay teachers too much. Then we’d get greedy people as teachers, and we should want self-sacrificing people.” But there’s also the idea that if you know that your work provides benefits to others, that should be enough. Like, “What, you want money, too?” So people complain [in that way] about anybody who’s chosen a self-sacrificing, altruistic, or even useful job.

You’re less in favor of the whole job guarantee idea, which Bernie Sanders and others have endorsed, and would rather see a guaranteed basic income.
That’s correct. I’m someone who doesn’t want to create more bureaucracy and more bullshit jobs. There’s a debate between job guarantee—which you’re right that Sanders is now endorsing in America. It’s the idea that governments should ensure that everybody has access to at least some kind of job. But the idea behind universal income is you just give people enough money to live on. After that, it’s up to you how much more you want.

And, again, I personally think that the job guarantee would just create more bullshit jobs. Historically, that’s what always happens. And why would we want the government deciding what we can do? Freedom means our ability to decide for ourselves what we want to do with ourselves and how we want to contribute to society. It seems as if we’ve conditioned ourselves to think that even though we talk about freedom as our highest value, we don’t really want it. And basic income would help provide exactly that. Wouldn’t it be great to say, “Okay, you don’t have to worry about survival. Now go off and decide what you want to do with yourself.”?