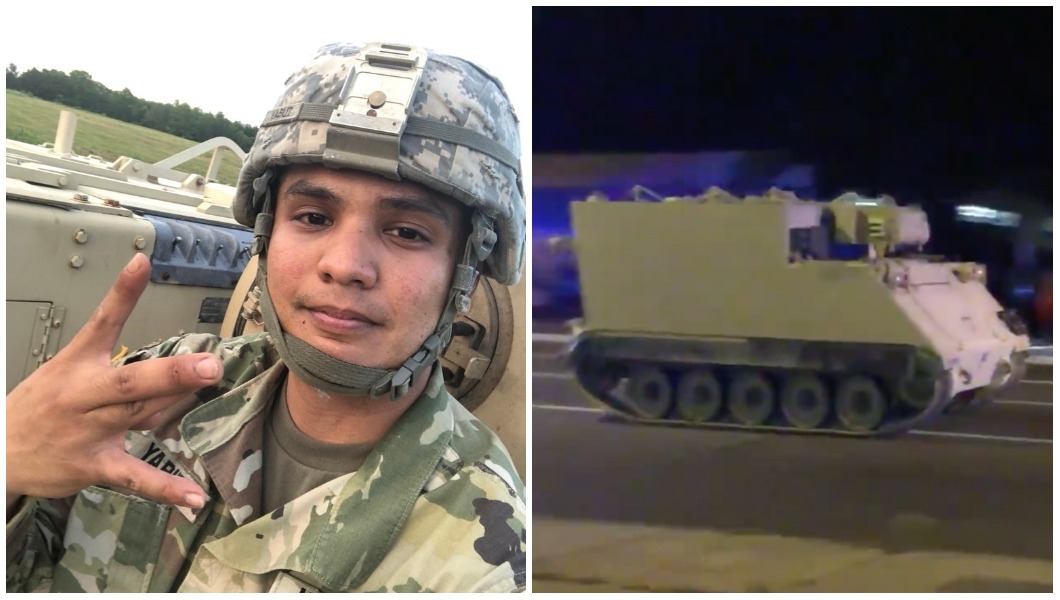 In the latest case of life imitating Grand Theft Auto, police in Virginia wound up in a wild chase with a vehicle that looked a hell of a lot like a tank on Tuesday, pursuing the armored, 11-ton monstrosity for 60 miles before the hunt finally came to an end, CBS affiliate WTVR reports.

Police identified the driver as 29-year-old Joshua Philip Yabut, a lieutenant with the Virginia National Guard, who allegedly stole the bulletproof war machine from Fort Pickett, a military base outside Richmond, at around 8 PM Tuesday night. According to WTVR, police said he was on drugs during the pursuit—and he apparently decided to chronicle his joyride on Twitter.

Yabut allegedly gunned the massive vehicle down the interstate with dozens of cops on his tail, eliciting at least two outbursts of “what the fuck?” from witnesses on the side of the highway.

According to WTVR, the thing wasn’t actually a tank, but a personnel transport vehicle, equipped with tank treads but no weapons. Still, that doesn’t make it any less terrifying when it flies by your house at about 40 MPH, looking like something lifted straight out of Black Hawk Down.

“It just seemed like something out of a movie,” witness Brian Wingert told WTVR. “It sounded like a tank, but it was moving pretty fast.”

Police chased Yabut all the way to downtown Richmond, where he just stopped, hopped out, and surrendered after more than an hour of racing through the city, the Richmond Times-Dispatch reports. Witnesses told the paper police sicced an attack dog on him and tased him before closing in and detaining him. Yabut has since been charged with driving under the influence of drugs, along with felony counts of eluding police and unauthorized use of a vehicle, WTVR reports.

The vehicle might not have been packing any weapons, but it looked a little bit like the reincarnation of the Killdozer, a bulletproof, tank-like monster of a machine that rampaged through Colorado back in 2004. Thankfully, Yabut didn’t actually lay waste to a ton of buildings, or hurt anyone. Still, he proved that there’s not a ton that local or state police can do when a massive armored vehicle rolls through town.