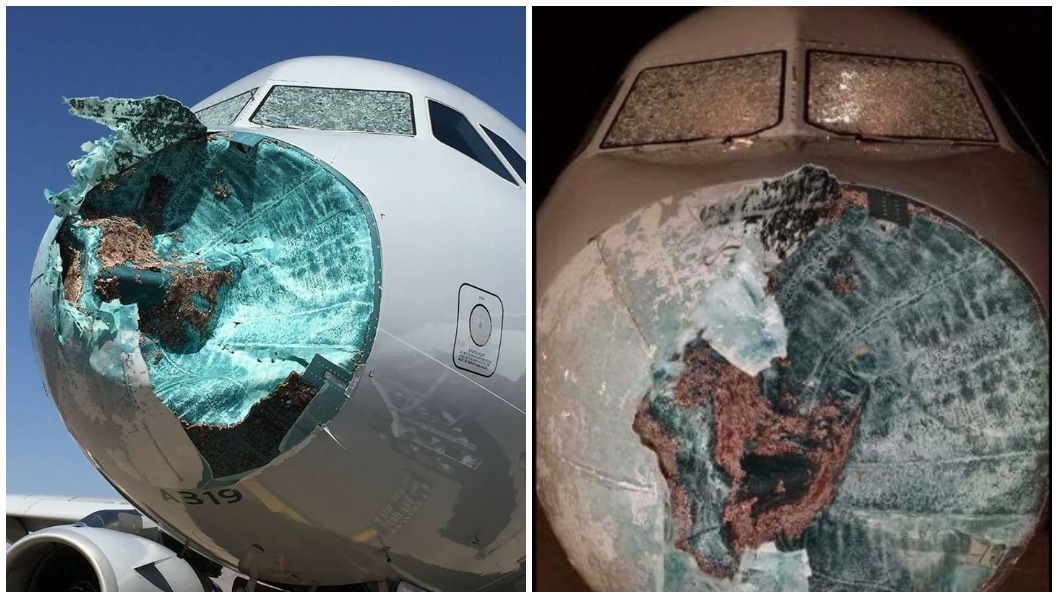 Looking at photos from American Airlines flight 1897, you’d think the plane might’ve taken a nosedive and crash landed, or maybe slammed into another aircraft headfirst. But the gnarly amount of damage it took all came from a vicious thunderstorm, pummeling the flying metal tube with so much hail it shattered the front windshield and ripped half of the nose clean off.

According to the Washington Post, the plane was headed from San Antonio, Texas, to Phoenix, Arizona, on Sunday when it flew straight into this meteorological nightmare:

Passenger Jesus Esparza described the hell that followed—what he called the “scariest flight of my life“—in a post on Facebook. Not long after takeoff, the plane started “rocking side to side” as it entered the storm, he wrote. A woman behind him threw up into her barf bag, and—as babies screamed and lightning flashed outside—the turbulence got even worse.

“Then we drop,” Esparza wrote. “We dropped so hard that objects in people’s laps start flying inside the aircraft.”

In a redux of that flight where pretty much everyone onboard threw up, things only got more chaotic. The pilot tried to make an announcement over the intercom, but he kept cutting out, Esparza wrote. Meanwhile, baseball-sized hail pummeled the plane as the storm continued to bat it around in the air.

“Everyone can hear the hail hitting the plane,” Esparza wrote. “More passengers are throwing up. Everyone needs bags. I hand my throw up bag to the lady behind me and see another woman handing her infant baby to a stranger so she can throw up.”

Eventually the plane made it out of the storm, and the pilot announced he’d be making an emergency landing in El Paso to deal with some damage to the windshield. Unbeknownst to Esparza and his fellow passengers, the entire nose of the plane had basically been obliterated, and the front windshield had shattered—forcing the pilots to land the plane virtually blind, according to the Associated Press.

A handful of meteorologists who heard about the flight were baffled as to why the plane would try to fly through such a brutal storm. According to the National Weather Service’s Ken Waters, the flight could’ve just steered clear of it and still made it to Phoenix.

Esparza wrote that he won’t be traveling again “anytime soon” and “maybe not at all,” which—considering the recent spate of exploding engines, cracked windshields, flaming carry-ons, smoke-filled cabins, and abusive flight attendants in the air—might not be such a bad idea.