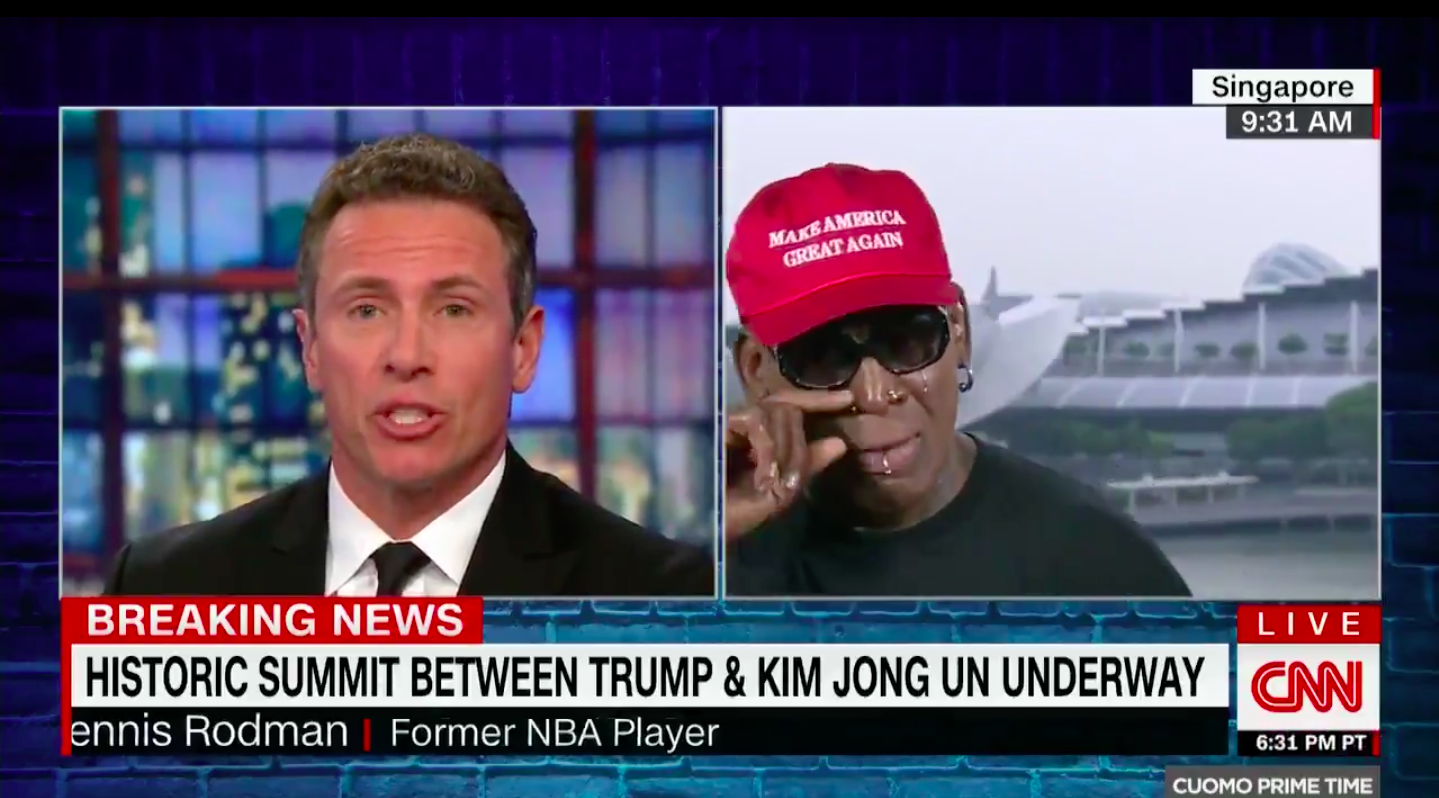 As Trump cracked fat jokes and tried to build a “very special bond” with the North Korean dictator Kim Jong Un in Singapore, NBA Hall of Famer and one-time Celebrity Apprentice star Dennis Rodman—just about the only guy in the world to have personal friendships with both Trump and Un—cried tears of joy about the historic summit.

“It’s a great day. I am here to see it. I’m so happy,” Rodman said during a live interview with CNN from Singapore, donning a MAGA hat and a shirt advertising PotCoin, the cannabis cryptocurrency company that funded his trip to the summit.

Rodman, who first traveled to North Korea with VICE in 2013 and then visited the Hermit Kingdom repeatedly in the years since, got choked up when he brought up the death threats he received after building a friendship with Un.

“I said to everybody, the door will open,” he told CNN’s Chris Cuomo, wiping away tears behind his massive sunglasses. “It’s amazing, it’s amazing, it’s amazing. When I said those things, when I went back home, I got so many death threats, and I believed in North Korea, and I couldn’t go home, I couldn’t even go home, I had to hide out for 30 days. But I kept my head high, and I knew things were going to change. I knew it. I was the only one.”

He ended the interview by thanking a lengthy list of supporters, including Pearl Jam’s Eddie Vedder, who “supported [him] through all these things.”

While Rodman was not officially invited to take part in the summit, Rodman told Cuomo that Sarah Huckabee-Sanders “reached out” to thank him for his help with, uh, North Korean diplomacy or something. “She called me and said, ‘Dennis, Donald Trump is so proud of you. He thanks you a lot.’ And that means a lot,” Rodman said.

That’s a big change from Trump, who back in 2014 called Rodman “drunk or on drugs” for suggesting they go to North Korea together, and said the country was the “last place on Earth I want to go to.”

But a lot has changed for Trump since then, seeing as how he’s now the leader of the free world. This is the world we live in now, everybody—one where Donald Trump negotiates deals with dictators, and Dennis Rodman gets so worked up that he sheds more tears than he did when he repeatedly broke his penis.