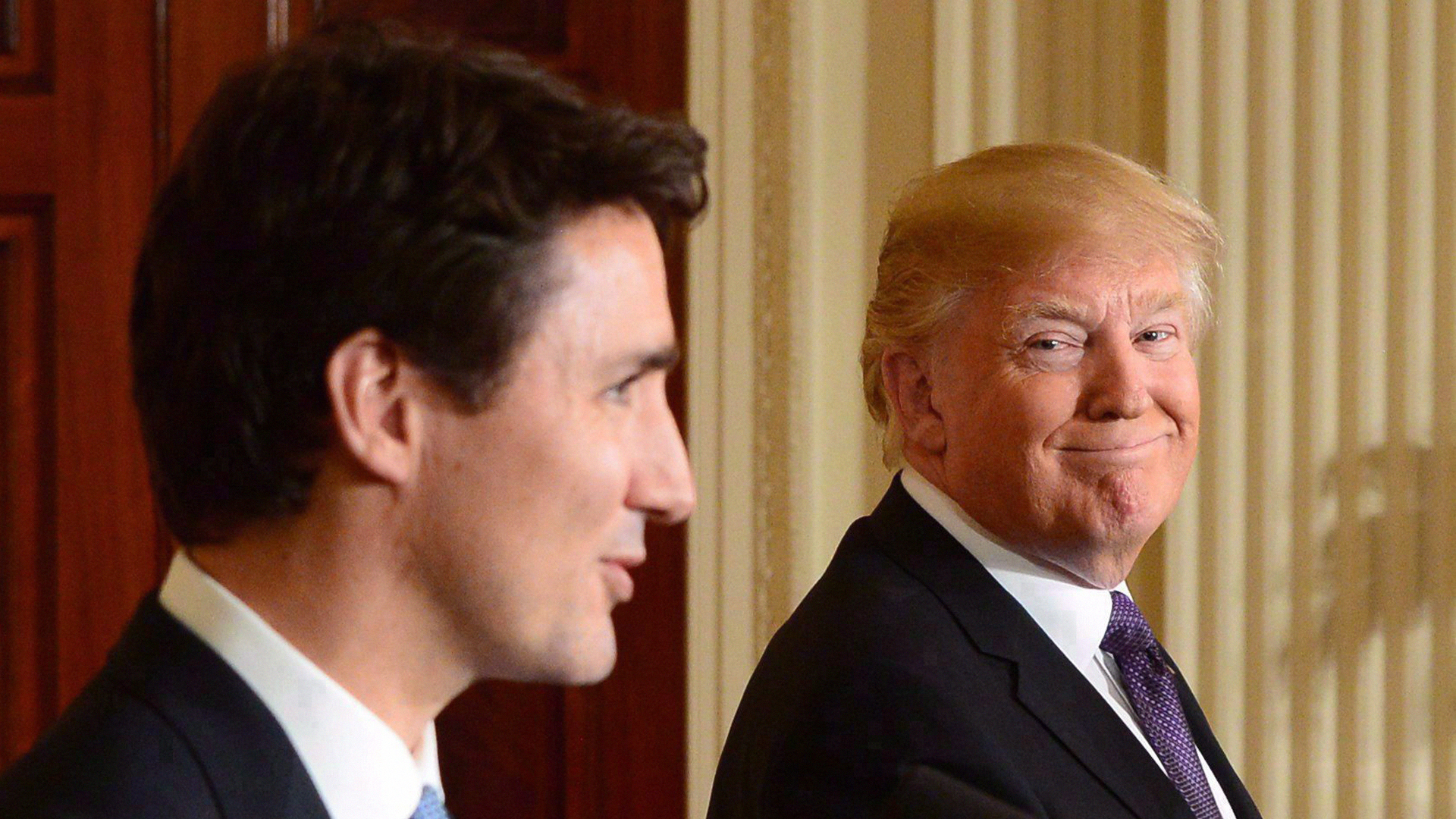 Breaking up is hard to do.

But sometimes, when it’s over, it’s over.

There are the normal stages of grief—denial, anger, bargaining, Chunky Monkey ice cream, depression, acceptance—that everyone must go through when their heart has been pulled out.

If I am clocking the progression of Justin Trudeau’s breakup with Donald Trump accurately, I believe we are just days away from acceptance.

It hasn’t always been an easy relationship.

When Donald Trump was inaugurated in early 2017, Trudeau and his team had already begun a full-press courtship. Senior staff and government ministers were dispatched to win friends and influence people, tasked with convincing colleagues and underlinings of the president that the prime minister was his kind of man.

It was, in many ways, its own matchmaking effort. They sent transport minister and former astronaut Marc Garneau down to Florida to meet suitors, given his time spent training at Cape Canaveral and, I assume, his love for Jimmy Buffet. They dispatched retired General Andrew Leslie to buddy up with ‘The Generals,’ James Mattis and John Kelly—likely over M.A.S.H re-runs.

Given the United States was entering into a period of nationalism of all stripes, from implementing an immigration ban on Muslim-majority countries to threatening tradewars with anyone stupid enough to trade with America, that relationship was crucial.

And for a time, it worked. Trudeau got to brag to his other friends that he was the “Trump whisperer.” Whenever some aspect of the liberal international order was made Great Again by the president, you could count on Trudeau to pick up the phone and try to fix it.

But it started to become pretty obvious in the past few months that there was trouble in paradise.

The renegotiation of NAFTA was floundering, even as Trudeau et al tried to give Trump a few ways out—skinny NAFTA? Low-fat NAFTA? NAFTA with dressing on the side? Nothing worked.

The last straw came with the steel tariffs. Initially, Trump had exempted his bae, and the rest of Europe, from the punishing import taxes on steel and aluminum. That exemption ran out at the beginning of June, as the Commerce Department concluded that Canadian and European steel represented a national security threat to the homeland (because something something Chinese steel.)

What began as a spat quickly blew up into a full fight, before the G7 meeting in Quebec.

Trudeau announced retaliatory tariffs. Trump said he was actually doing this because of Canada’s trade-protected dairy sector. Trudeau told the world that he “won’t be pushed around” by the president—who, at that point, had left the country to meet his new BFF, Kim Jong Un

Trump, furious, called the prime minister “meek and mild” on Twitter as his crew told the world that Trudeau had stabbed the president in the back, that it was a betrayal, that Trudeau was heading for a special place in hell reserved for, I guess, world leaders who don’t like punitive tariffs.

It’s been a spectacular falling apart. One of Trudeau’s best bros, European Council President Donald Tusk, tried to help the prime minister cope. The two probably got drunk on depanneur wine and went to party in Quebec City that night.

Trudeau has tried to tell everyone the relationship is fine. He tried to go back to the negotiating table to break some NAFTA logjams. He’s tried lashing out at the president.

And now, I imagine, Trudeau is chin-deep in some tariff-protected Dairy Farmers of Canada™ Rocky Road Ice Cream right now.

The next step needs to be acceptance.

The reality is that Trump is, and I don’t use this technical term lightly, a bit of a scrub. And, as we all know, a scrub is a guy who can’t get no love from me. So there are two options.

Option one is just cutting him out of your life, because you don’t need that. Trudeau can continue sending negotiators to hammer out the details of NAFTA, and his team can keep talking with Trump’s cabinet. But there’s no rule of international diplomacy that says Trudeau and Trump need to keep talking. At this point, talking has proved shockingly ineffective. But if you’re going to cut ties, you need to commit.

If Trudeau is serious about Canada not backing down, then he needs to prove that. Trump fancies himself a bare-knuckles negotiator, so Canada ought to take the gloves off. Freeze progress on negotiations about a new border security pact. Turf the women-in-business council that Trudeau set up with Ivanka Trump. Stop playing go-between for Trump and the rational world.

This isn’t a wonderful option. It’s the political equivalent of deleting your ex off Facebook right after the breakup. And it’s a gambit—it could derail NAFTA negotiations entirely, it could ensure that the steel tariffs stay in place. But it could also prove to Trump that Canada didn’t come to play.

The other option is to apologize, even though we did nothing wrong. It’s meek as hell, but it just might work. Trump wants loyalty, even if he doesn’t deserve it. And, unless we want Trump to start spending all of his time with Kim Jong Un, we might just have to give it to him. Reality is, Trump is willing to play by a set of rules we aren’t, and if he’s wild and crazed enough to, as he put it, “stop trading,” then maybe we need to swallow a pint glass of pride and just give in.

If these two options—hell, if this entire tortured metaphor—sound facile and simplistic, well, that’s because they are. The president has taken a rules-based international diplomatic and economic order and reduced it to petty squabbles and feelings. Call it the Mean Girls Order.

Until we figure that out, be sure to reach out to the prime minister and make sure he’s doing OK. If he’s anything like me, post-break up, by now he’s probably watched Julie & Julia for the fifth time.