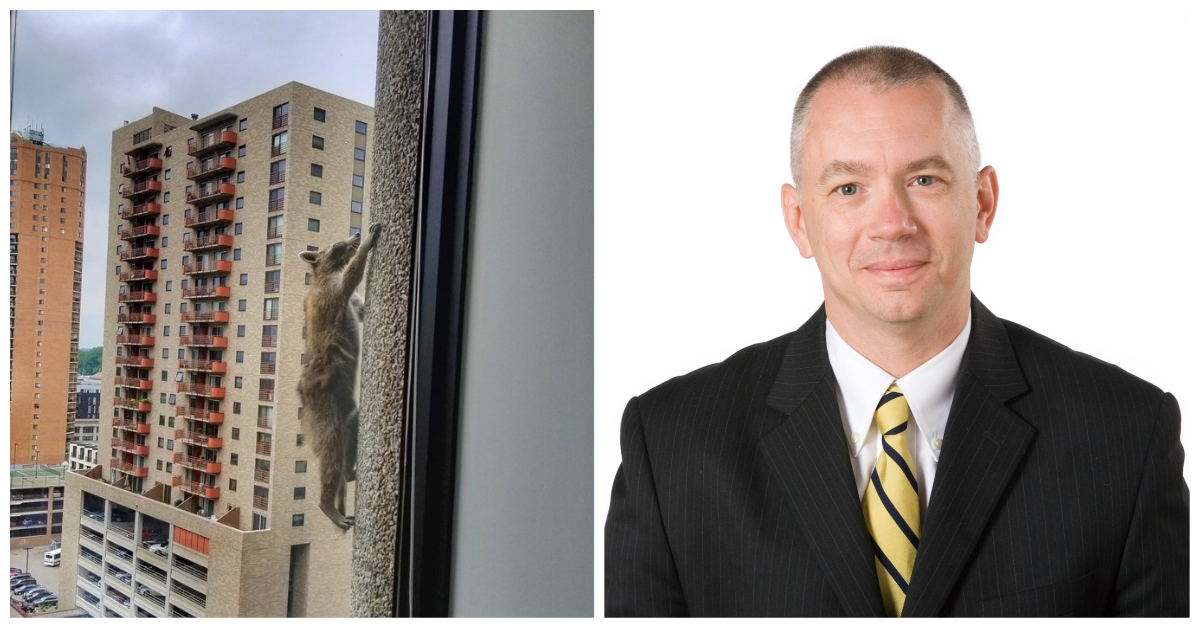 On Tuesday, the good people of St. Paul, Minnesota (and soon the rest of the world), turned their eyes skyward to follow the ascent of one astonishingly fearless raccoon as it made a mad dash from the second floor of an office park building all the way up to the roof of the 23-story UBS Tower in the city’s downtown area. (She’s fine, by the way. She was safely caught on Wednesday morning and has since been released onto a patch of very green land.)

Across the street, watching the 36-hour saga unfold, stood 51-year-old Minnesota Public Radio (MPR) reporter Tim Nelson. Thanks to Nelson’s watchful eye—and use of Twitter—his reporting helped propel what could have been just another bizarre story about a pesky trash panda into a full-blown viral phenomenon.

To understand how Nelson wound up covering the most dramatic skyscraper climb since the time that guy suction-cupped his way up the side of Trump Tower, we called him up to talk about raccoons, journalism, and his new-found Twitter fame.

VICE: Hey, Tim, so I know you’ve been a reporter for 20 years covering crime, local government, and education for various Minnesota news organizations. I’m wondering, then, how you wound up covering this assignment…
Tim Nelson: Well, I walked past it—literally! This happened right across the street from our studios here in downtown St. Paul, and a number of us had seen this raccoon nestled in a little ledge on a wall on a building across the street from us, and we saw it on Monday. (We’re pretty familiar with raccoons around Minnesota, but we don’t typically see them on buildings or in the same place for very long.)

And so we thought, Hey, they’re nocturnal. This thing should disappear during the night when everything’s quiet and there’s nothing around to threaten it. We came back on Tuesday, and it was still there, and we were like, Something is wrong here. So an editor and I were walking in the area, and she said, “What about that raccoon?” with that look in her eye that meant here’s what you’re going to do today.

I just kept thinking, That raccoon is one bad paw placement away from being raccoon potpie. It was just such a drama and so arresting to watch. I just thought to myself, I can’t turn away. I cannot not find out how this turns out. It didn’t matter what it took, didn’t matter what I had to do. I was going to stick it out and find out what happened.

You and the rest of the world.
You know I felt that same thing. I just happened to have a front row, around-the-clock seat for it.

What do you usually cover for MPR?
I’m a general assignment reporter. I cover everything from the legislature to the weather. So that’s part of the reason that this sort of fell into my lap. I didn’t have a particular assignment that day, and this raccoon having been nestled in this wall for the second day got on our radar, and we decided we were going to, if nothing else, find out why raccoons did this, or what might be wrong with that raccoon. I didn’t anticipate a round the clock assignment when I pulled out of my garage Monday morning.

So what do you think was wrong with it?
I thought typically a raccoon acting unusually is ill in some way. But yesterday afternoon I got invited up to the 23rd floor of this building where the raccoon was resting on a window ledge, and I have never seen a more relaxed, casual wild animal in my life. It looked like the way my dog sleeps in the living room and was paying absolutely no attention to us on the other side of the glass and certainly no attention to the 250-foot precipice that it was sleeping on.

At what point did you realize it had become a viral phenomenon?
Let me tell you, I am not a stranger to animal stories. The guy who killed Cecil the lion in Africa was from the Twin Cities here, so needless to say I am keenly aware of the potential of animal stories. I thought when I saw this raccoon that this is going to be a story, and if I get it out on Twitter, it may get some traction.

I thought maybe my neighbors might recognize this story and stop me while I’m walking my dog and say, “Hey, I saw that raccoon story you did!” When I got to work on Monday, I had about 9,000 Twitter followers, and it had taken me the better part of a decade to get them. But by Tuesday afternoon, I think I had 4,500 more followers. Twenty-five years of journalism toil, soaring lyrical copy, gritty investigations, round-the-clock vigils—decades of them—and a raccoon running up the side of a building across the street for me had garnered me half as many Twitter followers as my entire career.

As a former crime reporter, did you ever worry you were missing a story that might have had more news value to the local community?
You know, the beauty of journalism is it comes in many, many, many forms, and I have long ago stopped being judgmental about them. During my career, I’ve written food section reviews on frozen meals. I have done it all. And, you know, that’s part of what I think experienced journalists come to understand is that there is a really diverse audience out there. There are many, many interests. There are many, many perspectives, and if you start making decisions about what’s worthy and what’s not, you’re not serving the people you’re there for.

What are your thoughts on raccoons generally, and how may that have changed after watching the plight of this one very adventurous raccoon?
I actually grew up in a town called Coon Rapids. The town symbol is a little raccoon. My family waged a regular battle over whether the garbage cans were going to be vertical or horizontal. I’m practically related to that animal. They tear apart my neighbor’s garbage and strew diapers and leftovers up and down the alley that I have to go clean up, so I’m not a huge fan. I remain a mostly non-fan of raccoons.

I was talking to a wildlife guy, and he said raccoons like to climb when they’re in danger, and we have a built an environment that is absolutely perfect for them. So the city has become really an ideal environment for raccoons, and if that’s the way we’re going to live, we’re going to have to learn to live beside them.

Or below them.
Or below them! Or in great fear of their safety, despite any previous feelings.

This interview has been edited for length and clarity.