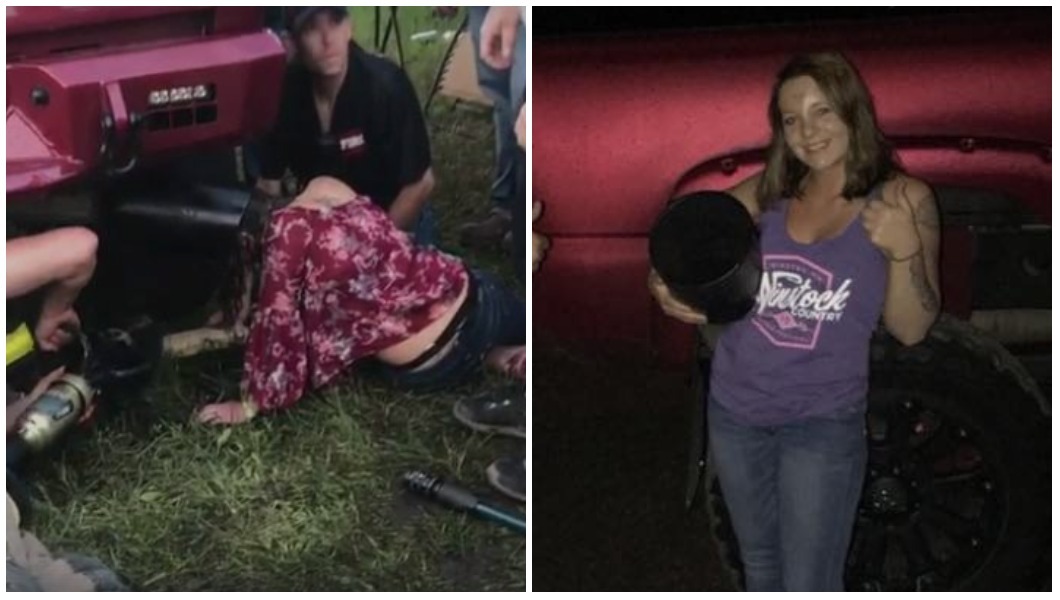 Like any 19-year-old at a music festival, Kaitlyn Strom went to Minnesota’s Winstock, a two-day country music bonanza, looking to have a hell of a good time. And on Friday, while she and her friends were hanging out by a jacked-up truck with a massive tailpipe, she got busy making that happen.

“We were just all having fun and I saw this big exhaust pipe and I was like, ‘Hey, my head could probably fit in that,’” she told the Hutchinson Leader. “So I tried it.”

She was right. Her head did, indeed, fit in the tailpipe—but unfortunately, she told the Leader, “it didn’t want to come back out.” The teen wound up stuck in the thing for 45 minutes, and thus, this gem of a video was born:

You’d think that Strom would be painfully embarrassed that firefighters had to cut her head out of a truck’s exhaust pipe, or the added fact that someone captured the whole thing on video—one that’s been viewed more than 1.3 million times on a Facebook page called “Truck Rice” (?), and 2.7 million times on another. But instead of holing herself up in her room and praying no one found out she was the girl in the video, she’s owning the hell out of it—proudly proclaiming that, yes, she did stick her head in that tailpipe, and she lived to tell the tale.

Most people would probably turn away anyone looking to interview them about what happened, reluctant to give the story more legs than it already had. But not Strom. She sat down with the Hutchinson Leader for an exhaustive play-by-play, detailing what it was like to find her head jammed inside a place no head should ever be jammed.

“[I was] kind of confused because I didn’t know what was going on, because I couldn’t see around me,” she said. “But I trusted everyone who was around that I knew to get me out safely.”

“I would just say thank you to everyone who has supported me and been there throughout this,” she said. “Even [the people] with the mean comments for teaching me who I don’t want to be like, and how to be strong and not care and be bothered by what people say.”

In a triumph of karma, Strom didn’t even have to pay for the damaged tailpipe. The dude who owned the truck turned out to be “absolutely wonderful,” she said, and fixed his exhaust without charging her a dime. And while she did walk away with a ticket for underage drinking—which seems to explain how this all happened—she handled the fiasco with unimpeachable grace. Plus, she’s got the honor of being an integral part of what’s now been crowned “the most famous tailpipe in Minnesota.” Fail upward, baby. Fail upward.