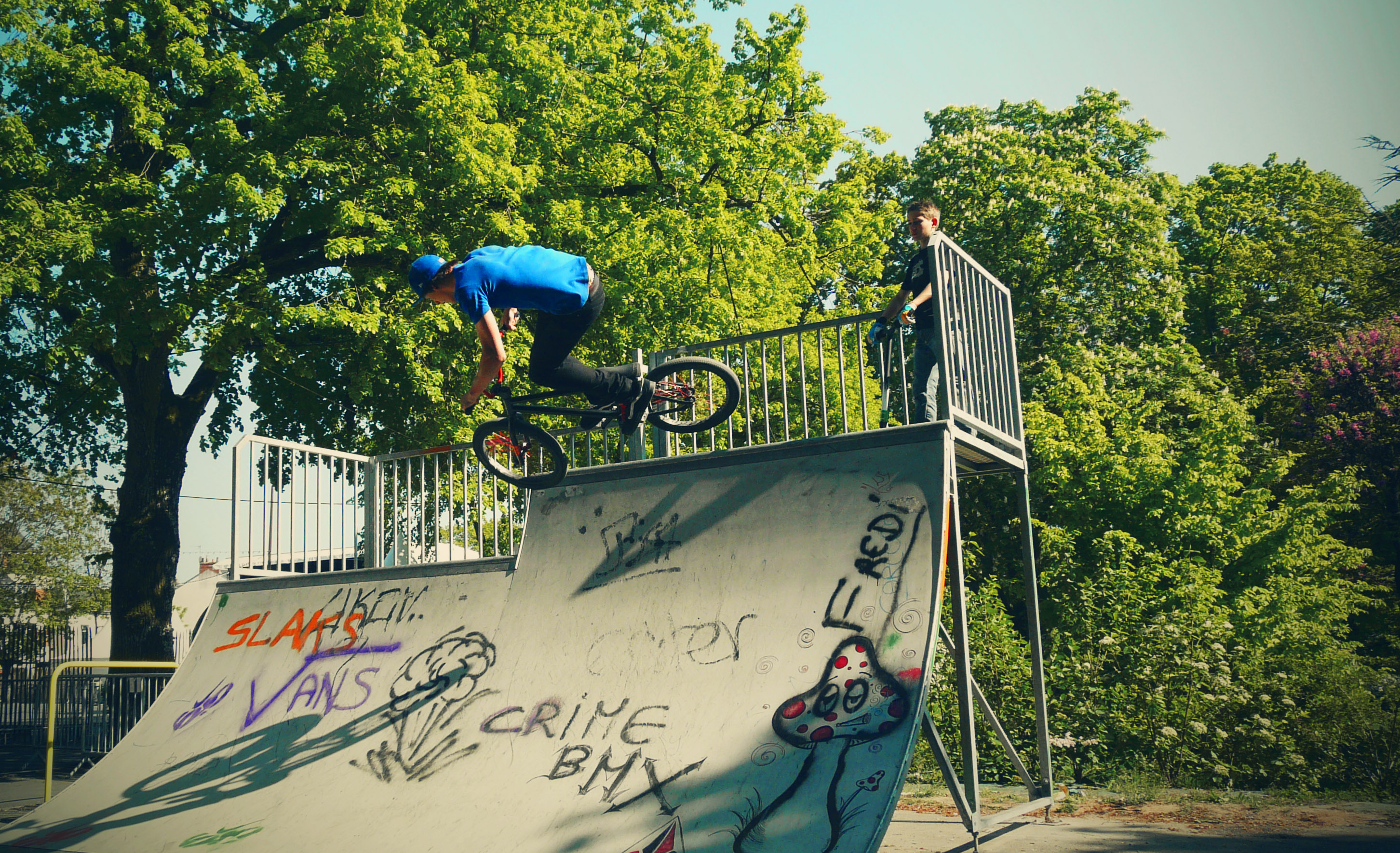 I have always regarded my elfin-like ability to land on my feet as something that could appear in my epitaph: “No nimbler a man was there than Greg Thomas.” More accurate, it turns out, would be, “Awkward and ignorant, he was at his best on solid ground.” The painful truth is, as I age, I am less man, more Humpty Dumpty.

You see, all that elfin crap was nowhere to be found when I went over the handlebars of my BMX and landed on my face in front of my seven-year-old son at a indoor bike park.

My broken teeth didn’t care that I once performed a dance routine on stilts. The co-op student mopping up my blood rolled his eyes at my claims of juggling on a unicycle and mastering the slack rope decades before the hipsters. The paramedics were skeptical of my ability to tie my own shoes let alone ride a bike when they arrived for the “old guy that ate it large on the intermediate jump line.”

Now, I didn’t hear anybody say that but somebody probably did. And if they didn’t they should have because that is exactly what the old guy did. Ate it. Large.

Over-enthusiastic parenting left me splayed out like an overweight starfish dying on the beach. Enamoured with all the city had to offer, my wife and I tried everything with our first born. We trampolined, tumbled, skated, rock climbed, danced, skateboarded, expressed our feelings with found objects, we anythinged and everythinged.

Of all things, he glommed onto BMX—half pipes, box jumps and the like. You might as well sign your kid up for a bong-making class. But who were we to deny his wants? Plus, I read somewhere action sports develop risk management skills and, it has basically been proven that weed is good for you, sort of.

BMX didn’t help my risk management skills whatsoever. It merely amplified my middle-aged bravado leading me to flirt with catastrophic injury. Thankfully, because I landed square on my teeth, the rest of my body escaped unscathed but my mouth was an absolute mess.

I can’t tell you any specific details of what happened because I don’t remember them. I was rendered unconscious by hubris and a wooden floor. 42 and a tad chubbier than necessary, I was face-down oozing blood. No doubt, my shirt rode up at the waist during impact leaving my love handles and sweaty lower back/bum hair exposed. I was a still life of the guy you never want to be. Forget Medic Alert, my bracelet should have said, “If I am unconscious, please restore my dignity by covering my fat ass and tummy prior to checking for vital signs.”

The next morning, the most damaged part of the man staring back at me in the mirror was his pride. I had done this to myself; playing the inept dad stereotype to the hilt. Hurting myself in a ridiculous fashion to an audience of adolescents snapchatting my demise.

Defeated, embarrassed, mouth involuntarily agape, I addressed the severity of what had happened. I could have just as easily broken my jaw, chomped off my tongue, or ended up a VICE headline: Sad Dad Paralyzed Trying Too Hard. But worst of all, it happened in front of my son.

“Nobody should have to tell me to stop,” I admitted to my reflection, “I just should. I am a fleshy mass of mediocrity best suited to less spectacular pursuits like online shopping and ironing my own clothes.”

My kid witnessing my accident made me feel naked, vulnerable and delicate. Would he regard me differently now and worry about my well-being, afraid his daddy was made of glass? Dammit. I wanted to bound out of the bathroom, toss him high in the air and show him his dad was back in top form. But I couldn’t. I could hardly look at myself in the mirror let alone be confident I could catch him before he hit the ground.

Then his little fingers curled around the edge of the bathroom door as he hesitantly slipped inside the room with me. His eyes, a sea of hope, concern and innocence gazed up at me. “When will you be able to ride your bike with me again, daddy?” The thought of returning to the bike park was nauseating but worse, the idea of disappointing him was nearly unbearable. Hardly looking at him, and verging on the inaudible, I said, “I don’t know if Daddy will ride his bike again, buddy” He said nothing but something shifted in his gaze before he shimmied away.

I was Super Dad no more. My cape and tights were now permanently stained with the blood of a mere mortal. The belief that your mommy and daddy can and will always protect you is integral to feeling secure as a child. Would he feel as safe now he’d seen his dad helpless? He was too young for this. The Tooth Fairy and the Easter Bunny had outlived my run as the great protector. Dejected and emasculated, I waddled out of the bathroom seeking the solace of my wife.

She patted my head and suggested I “let my old body rest,” and asked me what colour Jello I wanted. I bristled, I stiffened, I ballooned to twice my natural size with indignation. It was one thing for me to believe my best days were behind me. It was another thing entirely for my wife to confirm it—and to not know red Jello is my favourite.

I pursed my swollen lips together and curled up on the couch considering the exchange. Her tone was loving but the delivery seemed rehearsed and distant. Like she had played out this scene many times before and had grown tired of it.

This tough love perked me up.

The words of the dead Evil Kneivel came to mind, “A man can fall many times in life, but he is never a failure until he refuses to get back up.” My wife, with her red Jello jibe, had challenged me to do just that. I wasn’t going to crawl into a hole because I had felt the sting of embarrassment in front of my son. I was going to embrace my fallibility—revel in it. This old body had plenty of top shelf parenting moments left in it. As long I was OK with who greeted me in the mirror every morning. My son, he wasn’t judging me, I was. I was his favourite biking buddy and the fact that I’d damn near Picasso’d my face didn’t change that. And it wouldn’t be changed if I didn’t jump all the jumps and shred nearly as hard as him; he just wanted me there with him.

Unlike Humpty Dumpty, I can be put back together: wiser, content, imperfect and involved. I will ride again. Not to reclaim long lost agility or to satiate my ego but simply to spend time with my son. Though I can’t protect him from everything life will serve him, I’ll be there to help back up when he lands on his face, so to speak.