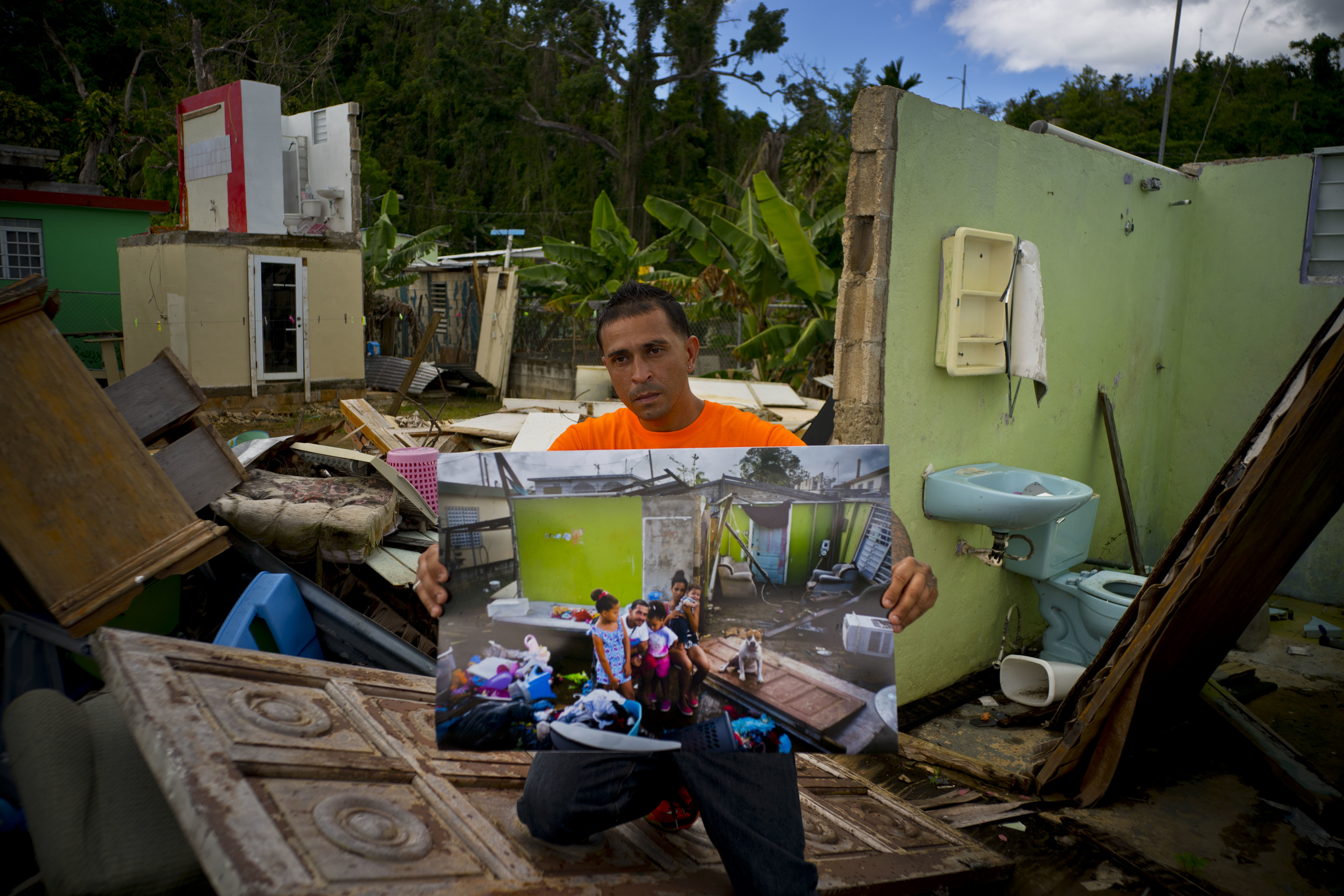 Late last month, a study in the New England Journal of Medicine sparked national coverage and outrage when it concluded that about 4,645 people may have died in Puerto Rico due to the effects of Hurricane Maria between its landfall on September 20 and the end of 2017.

This figure is hardly definitive, as it’s based on a limited household survey; the researchers note that the number of deaths, going by their data, could be anywhere from 793 to 8,498. But this study was just the latest of several that challenge the official death toll of 64. (Most estimate hurricane-linked deaths in the weeks after Maria to be around 1,000.) Even the government of Puerto Rico has acknowledged its initial figures were a joke and in December commissioned a new study, the most robust to date, that is expected to come out with a more definitive figure this summer.

It’s taken months, but this death toll reporting seems to be shifting public attention back to the island and the devastation it has suffered. Two weeks ago, the Congressional Hispanic Caucus, among others, called for a commission to investigate the official and actual death toll numbers and whether early underreporting may have slowed the federal response to the crisis, perhaps causing more deaths. That is an important issue to explore. But experts involved in or advocating for Puerto Rico’s recovery say that Congress could and should do so much more to address the island’s ongoing struggles. That includes, but is hardly limited to, both seeking justice for these deaths, and preventing similar losses of life in the future.

For starters, says Melissa Mark-Viverito of Power4PuertoRico, a recovery advocacy coalition, any commission formed should investigate the federal agencies involved in the initial response to Maria and where and how they fell short. We still don’t know how or whether negligence or poor management, not just an anemic response due to underreporting, lead to suffering and perhaps death.

The Federal Emergency Management Agency and the Trump administration insist they did the best they could while stretched thin after two prior major hurricanes and considering the logistical challenges of responding to a disaster on an island with damaged ports. But robust reportage has already made a strong case that FEMA and other agencies did not adequately prepare for Maria, or use all the powers they could have to respond. It is also painfully clear that Trump did not care as much about Puerto Rico’s recovery as he did about Florida’s after Hurricane Irma or Houston’s after Harvey. His blithe attitude may have cooled the federal response to a degree.

“Our understanding is that some agencies may have done some preliminary analysis and reports” about response efforts, Mark-Viverito told me. “We don’t have access to that information. So we demand accountability and transparency and the commission would hopefully provide that.” From there, she added, ideally the commission would be able suggest internal agency policy shifts or legislation tweaking the way they respond to disasters to be able to better react in a future Maria-like situation. This would be in line with the massive emergency management policy changes that followed Hurricane Katrina, which blasted New Orleans in 2005, killing some 1,833 people.

If a commission discovered “any wrongdoing, any corruption, any malice in that corruption,” added Julio Lopez Varona of the Center for Popular Democracy’s Puerto Rico programs, “then people should go to jail.” In his view that includes not just federal officials but local Puerto Rican officials, some of whom have come under fire for mismanaging the disaster and recovery. But Mark-Viverito notes that it is far too early to think about how to enact punishments on individuals.

Lopez Varona argues that while investigations, justice, and policy reforms are important, the most pressing concern for many advocates is still trying to secure more recovery money. Puerto Rico has requested $94.4 billion, over half of which would go to rebuilding and hardening the island’s frail electrical grid and repairing homes. (Power failures led to many deaths in hospitals and care facilities. Nine months after Maria, thousands still lack power or homes, and the grid has only been patched, not strengthened against future disasters.) That figure is in line with projections for property damage and economic loss from independent financial institutions. But Congress has allocated just $30 billion in recovery funds, and even that has come piecemeal and with harsh delays. “The funding that’s been provided so far is just paltry,” said Mark-Viverito.

“The government has admitted that we’re not ready” for another storm, even as hurricane season has begun, stressed Lopez Varona. “Everybody knows that the grid is extremely fragile.”

Many advocacy groups are also calling for moves that would free up economic resources to focus on recovery and future disaster prep work. Congress could, say, suspend or completely do away with the obscure but influential Jones Act, for instance, which requires that goods shipped to Puerto Rico from the US come on American vessels, which jacks up the price of items beyond what most pay on the US mainland, despite Puerto Rico’s higher poverty levels.

Puerto Rico is also mired in $120 billion in debt thanks to a mix of local overspending, predatory loans, and (mostly) poor economic policy choices made for the island by Congress over the years. A 2016 law enabled the territory to file for bankruptcy, but also subjected it to brutal austerity measures pushed by a federal oversight board, which academic Jose Colon-Morera notes “decimated governmental capacity before the hurricanes.” (Irma clipped Puerto Rico before Maria slammed straight into it.) The board is gunning for more austerity measures this year, even as the island is still recovering. Managing this debt sucks down most of Puerto Rico’s resources. As such, argues Puerto Rican affairs expert Pedro Caban, Congress could aid the island’s recovery by halting austerity measures and freezing debt payment obligations until the island is back on its feet. Some, like Trump last year, before his team walked the idea back, have pushed further and suggested complete debt forgiveness for the island.

“We should not be talking about paying back the debt at this moment, or any interest on it,” said Mark-Viverito. “Any money should be spent on long-term recovery, structural and physical.”

The experts I’ve spoken to also point out that, as this board largely controls the island’s finances now, it has undue control over the allocation of relief money. Critics worry that it may focus recovery on areas that will yield the most dividends for the island’s creditors rather than deliver relief where it is most necessary. Caban argues that the board should be suspended at the very least, while other activists say that, even if it is not, it should have no role in recovery allocations. Instead, local oversight groups should be empowered. “These are all things that are critically important to the long-term viability of Puerto Rico,” said Mark-Viverito.

Unfortunately, neither she nor any of the other experts I’ve spoken to have faith that Congress will deliver, or even take initial action, on any of them. They may not even manage to form the meager commission the Hispanic Caucus suggested. Congress and other national institutions have a clear track record of neglecting Puerto Rico, despite the fact that its 3.3 million residents are American citizens and it is more populous than 21 states. The territory has no voting voice in Congress, nor a say in presidential elections, meaning it has no real political power. Congress’s lackluster response to Maria only reaffirmed its dismissive attitude. “Many” in Puerto Rico, said Lopez Varona, “have already given up on Congress.”

Some recovery advocates are as (or more) concerned with finding ways to hold Congress accountable as they are with pushing potential congressional investigations or measures to help the island. A number of groups, and the current governor of Puerto Rico, Ricardo Rossello, are leading a new push for statehood so that they might someday have leverage in Congress. (Others, like Caban and Lopez Varona, favor independence for true autonomy.)

But statehood, while widely rhetorically supported in DC, is not on any legislator’s radar. Short of that accountability goal, Rossello and others, like Lopez Varona, are simultaneously working to mobilize the approximately 5.6 million Puerto Ricans living on mainland America into a formidable voting block. (It helps that they’re concentrated in swing states like Florida, Pennsylvania, and Ohio.) Organizers hope to use voter drives and active engagement to create incentives for mainland representatives to actively support the island’s interests, and punishments for those who don’t. “That is maybe our only tool of defense against Congress,” said Lopez Varona.