A novel floating power plant that combines a 145-MW gas-fired combined cycle power plant and a battery energy storage system could begin operating in the Dominican Republic by early 2021.

The project also includes a SIESTART solution; Fluence Energy, a joint venture between Siemens and AES, will provide a 5-MW/10-MWh battery energy storage system to provide frequency regulation control. “This will allow the plant to operate at full capacity with highest fuel efficiency,” Siemens noted. 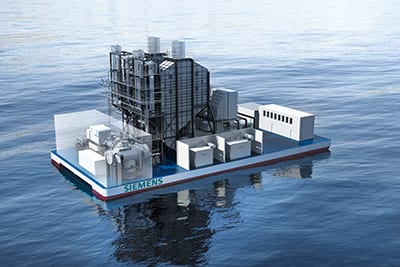 SCC-800 SeaFloat concept—here with the mid-sized SGT-800 gas turbine—has a capacity of up to 450 MW. Courtesy: Siemens

Following the devastating tsunami in Japan in 2011, Siemens’ SeaFloat team has been actively developing and marketing floating platforms and ships that can be equipped with varying gas turbine models. The concept, which it offers for lease or purchase, seeks to meet what it says is surging demand from energy providers in developing nations or companies looking for flexibility in industrialized countries.

[For more details on the evolution of floating power plants, see “Novel Floating Power Plants on the Horizon” in POWER’s December 2018 issue.]

The proposed 145-MW Estrella del Mar III project, which leverages barge-building know-how from global technology and defense firm ST Engineering, would be one of Siemens’ first offerings of the concept. The company is currently preparing to deliver SeaFloat’s first order for a floating platform that will be equipped with two SGT-800 gas turbines, and it could be placed by the end of 2018 and commissioned as early as the beginning of 2020, it said.

Estrella del Mar III is a “turnkey plug and play concept” that seeks to provide the customer with “a quality proven power plant at a lower cost in comparison to a similar land-based power plant,” the company noted.  Karim Amin, CEO of global sales at Siemens Power and Gas, said that the SeaFloat technology is designed to provide mobility and flexibility. Demand for both is growing in global electricity markets as more countries face land constraints. “Our vision is a future with access to affordable but clean electricity and clean water for everyone. A tough challenge to achieve, but a necessity in light of climate change and the need to provide electrical energy for the world’s growing population,” Amin added.

Siemens said that the majority of market requests for its SeaFloat concept are for its SGT-800 gas turbine, but “further solutions” based on the SGT-A65 and SGT-8000H series have also been developed to address a variety of market needs. “SeaFloat power plants can be moved to any site that is accessible by sea or major rivers and require almost no investment for land acquisition. SeaFloat has been designed to be as small as possible, and it has defined a new standard in power density. Because the plants’ construction and a large portion of commissioning are performed using standardized equipment under strictly controlled conditions in the world’s leading shipyards, a short lead time can be realized. Construction of the plant also does not interfere with any required onshore infrastructure like the installation of substation, transmission line, and access roads. This allows for a significant reduction in the total time required for these kinds of infrastructure projects,” it noted.