Last year was a happy one for the LGBTQIA+ community of India, as finally, after years, gay sex between consenting adults was decriminalised. But as members of the community thronged to the streets with pride, some felt detached from the celebrations, as the judgment, although welcome, wouldn’t impact their daily life.

Several identities come together to form what we call ‘living’, two of which—religion and gender—are particularly at odds for some members of the society. In Hinduism, the Vedas refer to a ‘third sex’, roughly defined as people for whom sex is not procreative, either through impotence or a lack of desire for the opposite sex. Members of the third sex are not ostracised however, and are sometimes recognised for having divine powers or insights. The Kama Sutra—the Hindu text detailing the pleasures of sexuality—states that the same-sex experience is “to be engaged in and enjoyed for its own sake as one of the arts”. Sure, we have the Baba Ramdevs of the world who consider homosexuality a disease, but there is also some acceptance in the scriptures, as mentioned above.

Mainstream interpretation of homosexuality in Islam, however, is different. Most of it is derived from the story of ‘Sodom and Gomorrah’, which is repeated several times throughout the Quran. The Quran, for the record, never once explicitly states that sex between same-sex people is a sin. Problems for inclusivity of various genders arise, as mentioned here, “from the belief that the Qur’an—and each and every word contained within it—is absolutely and literally true, spoken by Allah and conveyed through the Prophet Muhammad, and as such, is unalterable, completely clear and precise and not subject to any interpretation or debate.”

We spoke to a few Indian queer Muslims about the debate, the need for inclusivity, and the experience of being a double minority in India.

“I met my boyfriend last year and fell in love for the first time, so 2018 was good that way. I came out to my parents in 2017, but they were taking their time with it. It was a very impulsive thing for me to do; I hadn’t planned on coming out. We were having a dinner table discussion about marriage and my mom asked me to get married.

You know how Indian families are. They put a lot of pressure, and on that day I got frustrated and told her that I don’t like girls, and that I like guys. When she realised what I was talking about, I didn’t feel anything negative. It wasn’t like the stories of other families flipping out. I got very lucky. My mother was supportive. When I was young, she used to scream at me when I danced to “Masakali” from Delhi 6, but now she gives me a facial when I prepare to go for pride.

I haven’t spoken to my father about it. Dads are more difficult to talk to, but he’s met my boyfriend, and knows that he’s more than just a friend.

As compared to other conservative Muslim families, ones they describe as ‘kattar Muslim families’, mine has been very progressive. My father runs a small cosmetics store, while my mum’s a housewife. He only studied till the 10th grade, mum only till school. But they worked very hard for my brother’s and my education. That’s the only thing they wanted. It’s because of them that I’ve been outspoken without any inhibition.

Surprisingly, no one has brought religion into the picture. I remember how when I was growing up, I would go the nearby mosque to offer namaz. But there were guys there, so it was pretty difficult for me to focus on the praying part. I struggled with my religion then, but then I realised that both of them are different aspects of my identity, and I can keep them seperate. It’s all dependant on what kind of relationship you have with your god.

Now I’m earning and the PHD is a stable thing, allowing me to focus on my personal life and my family. I’m very hopeful about 2019. The (Section) 377 judgment was so important. As more time pases, better things will come now, like marriage, equality, etc. The judgment made me relieved about coming out. I’ve been coming out to so many people—now many of my friends and colleagues know. As for my family, they’re trying to understand new things everyday. It’s not every day that your son or daughter comes out as queer. It took me over two decades to come out to my parents, the least I can do is give them five-six years to understand.”

“I started the Queer Muslim Project as an online platform in March 2017 just to share information, to combat the overarching idea that you can’t be queer and Muslim. A lot of people started messaging us about offline events, and felt that to create tangible support, we needed to create that infrastructure of a community which can support each other, hold each other.

We had a consultation, where one person shared their story of how when his parents found out he was gay, they took him to a psychiatrist who put him through shock therapy. Even today, he still feels the impact of that treatment. Another person spoke about how his family was ostracised and had to leave their ancestral village when news of his sexuality became public. Many of these people shared stories of how when they went to queer spaces, they didn’t find Muslims there. A lack of community made people feel like they were alone. Another important discovery for us was that a lot of people were suffering from a deep sense of religious guilt, that maybe they’re doing something wrong. This happens because the progressive conversations around LGBTQIA+ in Islam aren’t easily available.

Queer spaces, generally are Hindu, dominated by upper caste gay men. If you start conversations about minority rights, some people get hostile. It also happens because all organised religions have been oppressive towards gender and sexuality, so many members of the community have distanced themselves from their faith. But what about people who are still trying to reconcile their religious and gender identity? Many times we are asked why we are still holding on to our religion, whether it’s like Stockholm Syndrome, and how we function when our religion hates us, etc.

Now, mainstream interpretations of Islam call homosexuality haraam (forbidden/sinful), but there are alternative ones which interpret it differently. Trying to say Islam by default condemns it is problematic, because people experience faith differently. People like Amina Wadud and Kecia Ali are working for a more pluralistic understanding of Islamic theology. Wadud argues that scriptural interpretation has been done by men, so by default, there’s a possibility that it’s about the experience of a certain group of men. She believes that if more women had been a part of transcribing the scriptures, they would’ve read them differently. We want to talk about these issues, including the politics of the day, which affects us more than it would Hindu queer people.

This year, I hope we can talk more about these issues. We want to be a part of the conversation that talks about general issues people of the community face, and work towards building a community which is more inclusive and has space for everyone on the dinner table.”

“My mom found out about me a few months ago. She looked at some texts and sensed things. The confrontation didn’t go very well, so we don’t talk about it. She hasn’t told my dad yet, because compared to the rest of us, he’s more religious, especially when it comes to Islamic identity. He’s stringent about the religious laws. Both my parents are teachers.

I don’t know whether this is everybody’s experience, but for the longest time, I thought people can’t identity as Muslim and queer. A significant part of my sexual identity was at odds with my religious upbringing. Growing up that’s what we would hear—that sodomy was wrong, not identifying with the gender you’re assigned at birth is a sin, etc. But that was also when I decided I wasn’t a religious person. 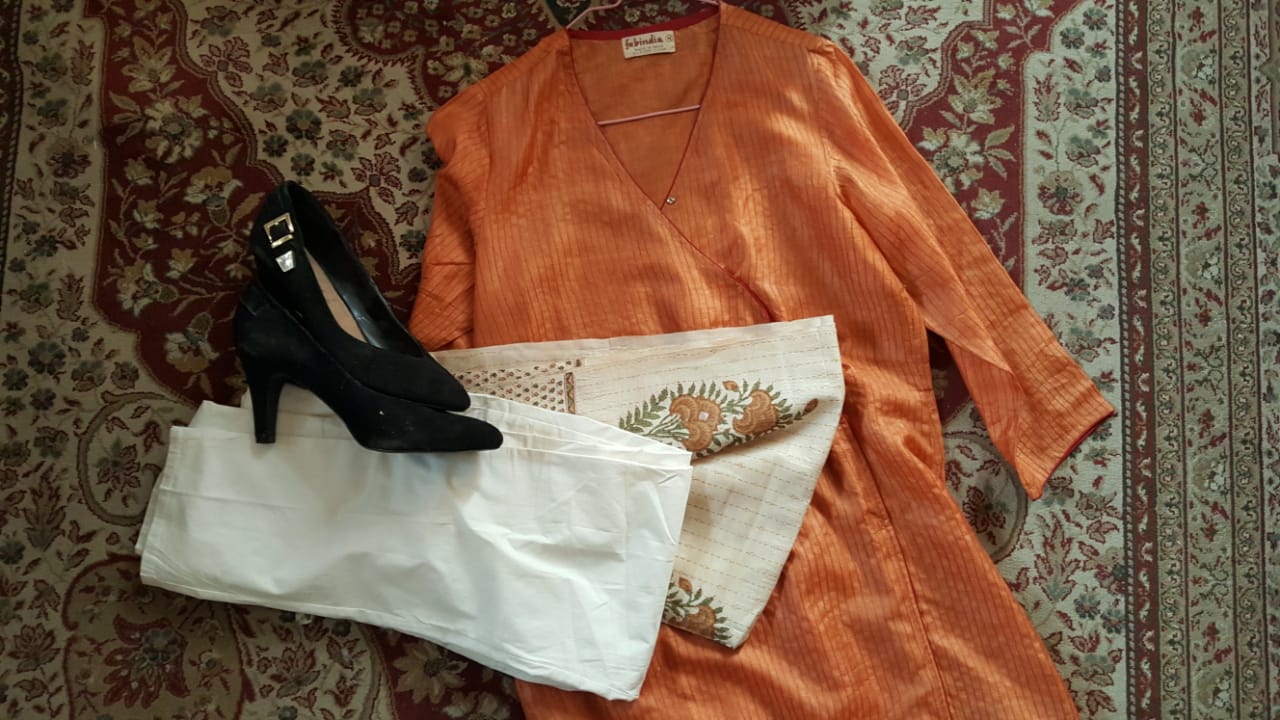 ‘What-to-wear’ at a family wedding as to not ‘weird’ your parents out. Image: Hamiza

The problem is that whether you pray to a god or not, you can’t segregate your queerness from the culture you emerge from. It shapes your identity in certain ways. For example, I look at some queer artwork about Shikhandi and I understand it, but it’s not going to hit as close to home as let’s say, art about queer djinns or stories about Prophet Lut, because those are stories we grew up with. It’s why we need spaces which deal with queerness in specific pockets of experiences.

When Section 377 was struck down, I remember sitting in a class in college when people were celebrating. A friend and I decided that we would be happy for those who would actually benefit from the decriminalisation. But when you examine the narrative of our lives, you realise that nothing will change. I returned home that day to realise that I will continue to be a closeted non-binary person, and my friend will still be a closeted bisexual. Things don’t change in the micro-narratives of our lives, which continue to be dictated by our immediate cultural circumstances. A lot of us can’t celebrate some wonderful liberalisations, because it doesn’t affect our contexts.

I’m hopeful about this year because it can’t get any worse. That’s the thing about optimism—you gain it when you hit rock bottom.”

This article originally appeared on VICE IN.