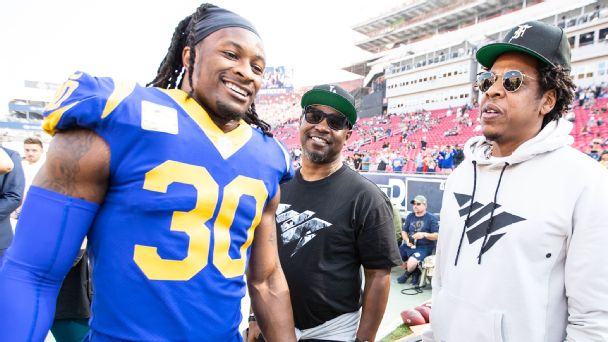 On the surface, he appears to be a tall, blonde, super-cool California kid. And when he talks, he sounds about the same. He’s casual, but to the point.

An initial glance likely won’t reveal someone who is “sneaky” funny, or even has much personality, let alone someone who can be outright “silly.”

But look — and listen — a little closer.

There are Jay-Z sightings, Halle Berry shout outs and Ric Flair. The Rams aren’t quite LeBron and the Lakers, but a Super Bowl could change that. Story

&#8226 Learn your lessons in McVayisms

There’s sometimes a smirk or raised eyebrow. And it’s often coupled with a sly, dry barb launched at a reporter or aimed at a teammate.

Take Week 14, when a reporter asked, innocuously enough, how would the Rams quarterback prepare to play a defense that had intercepted a league-high 21 passes?

“Try to throw it to our guys,” Goff deadpanned.

The response drew a chuckle from the small media contingent, and that smirk appeared on Goff’s face. It was another unexpected zinger from Goff, who is routinely dull in his delivery but chooses his spots wisely.

Goff’s humor is dry and nonchalant. He’ll deliver a one-liner, then continue like it never happened. If you’re not paying attention, or simply aren’t around Goff frequently, his jokes might go undetected.

“He’s really good at poking the bear,” Rams receiver Cooper Kupp said. “If he can find something that kind of can get you, he’ll sit there as innocently as possible and just little pokes here and there, just to see how much of a rise he can get out of you.”

It’s also part of a budding, and almost unexpected, boldness off the field, where the Northern California native has shown more of a willingness to engage his personality as he adapts to shouldering the responsibilities of leading the NFC’s No. 2 seed against the Dallas Cowboys in the divisional round Saturday (8:15 p.m. ET, Fox).

“As time goes on you become more comfortable in your role and I think that’s no different with [being a leader],” said Goff, who received an $18.5 million signing bonus as a rookie. “Just being able to be the leader I want to be, the teammate I want to be, the person I want to be, and just continue to mature and grow and be the best I can be every day.”

In his third season as a pro, and his second under coach Sean McVay, Goff has improved his timing, accuracy and decision-making. The proof is in his results. Goff has passed for 4,688 yards and 32 touchdowns, with 12 interceptions, while completing 64.9 percent of his throws. He also has rushed for a touchdown.

The Rams are 13-3, and two wins away from their first Super Bowl appearance since 2001.

Darren Woodson says the Cowboys will take away the Rams’ running game to win, but Tedy Bruschi sees L.A. getting off to a fast start.

Through 11 games, and a 10-1 start, Goff played his way into the MVP conversation alongside Drew Brees, Patrick Mahomes and Todd Gurley, before a post bye-week slump knocked him from contention.

After the bye, Goff appeared lackluster and out of sync against the Detroit Lions. He completely unraveled when he threw a career-high four interceptions in a loss to the Chicago Bears. And a loss the following week to the Philadelphia Eagles produced the first back-to-back regular-season losses in McVay’s two seasons as coach.

Despite the late-season issues, Goff stayed true to his reputation. “Even-keeled, wasn’t flustered at all,” McVay said. “But he knows that he can play better.”

Goff did play better in the final two games of the regular season, as he helped produce lopsided victories over the Arizona Cardinals and San Francisco 49ers, considered tune-up games before the playoffs.

Neither Goff’s coach nor teammates have been surprised by his distinct ability to handle whatever comes his way.

“He’s a bona fide Cali kid,” right tackle Rob Havenstein said. “Nothing fazes him, but it’s like — it’s never only the bad stuff that doesn’t faze him. The good stuff, he’s excited, he’s pumped, but he’s still even-keeled the whole way, no matter what happens, and that’s just with anything.”

Goff displayed rare emotion in a Week 5 victory over the Seattle Seahawks, when McVay relied on the offense to convert on fourth-and-1 and run out the clock to secure a two-point win. Goff snuck under the pile for a 2-yard gain, then screamed as he jumped to his feet and exuberantly pumped his fist.

But typically, after a long completion or touchdown pass, Goff exchanges a quick round of high-fives and moves on. And if he throws an interception? No head hanging. Picks happen. Just move on.

“He’s got a nice way about himself where he doesn’t take himself too seriously,” McVay said. “What you love about him is, he’s so refreshingly secure in himself that he’s unaffected by good or bad kind of outside noise.”

Behind Dak Prescott and Ezekiel Elliott, the Cowboys’ offense has found its rhythm. Aaron Donald and the Rams’ defense might not be able to disrupt that rhythm.

In a Week 4 victory over the Minnesota Vikings, Goff passed for 465 yards and five touchdowns, and posted a perfect pass rating of 158.3 to become only the third quarterback in the Super Bowl era with at least 30 attempts to do so.

The congratulatory messages flooded his phone. “I got a bunch of texts,” Goff said. “People saying good game and whatnot.”

Then he deadpanned: “They tend to do that when you play well. Not so much when you don’t.”

As Goff has settled into his role, teammates have grown accustomed to his leadership style, which comes with his humor and quirks. He’s addicted to his phone, like many 20-somethings are, and he seems to put it down only when work beckons. “Every now and then you’ve got to throw a football,” Havenstein chuckled.

Whether it’s the accolades that have started to accumulate — Goff was voted to his second consecutive Pro Bowl — or criticism that must be drowned out, namely the bust talk from his rookie season, Goff continues to handle himself in a calm fashion.

“At this position, it’s natural to try to be that way,” Goff said. “I may seem that way sometimes externally, it’s not always the case internally. But, you try to portray that externally, and most of the time I do feel that way. Just try to stay that steady, constant personality and person that can be there in any situation.”

Jerry Goff, Jared’s father, played major league baseball when Jared was young. Jerry said he ingrained in his son the importance of hard work if he wanted to make it as a pro, in any sport. And he also has had plenty of conversations with Jared about the importance of knowing his place in any given environment.

Jerry and his wife, Nancy, have noticed their son’s growing comfort in his current role, and said they haven’t been surprised to see some of his personality, including his humor, come out in his third season.

And as far the humor, “It’s dry and it’s sneaky,” Jerry said, while being sure to note that it is, indeed, in good taste and respectful. “I have recognized that a little bit and enjoy it — I enjoy his humor. He’ll do it at home, too, from time to time.”

Rams teammates say he often tries to stir things up with his jokes, but when they try to describe Goff’s unassuming personality, they say, “He’s just Jared.”

McVay, though, isn’t too proud to admit that he’s often a target of a Goff zinger.

“He’s gotten me a lot,” McVay said. “There’s always little things here and there. I’m sure there’s a lot of good one-liners when I’m not around, too.”

And Goff, as he attempts to win the first playoff game of his career after the Rams were one-and-done last season in a lackluster loss to the Atlanta Falcons in a wild-card game, says he doesn’t try to be funny.