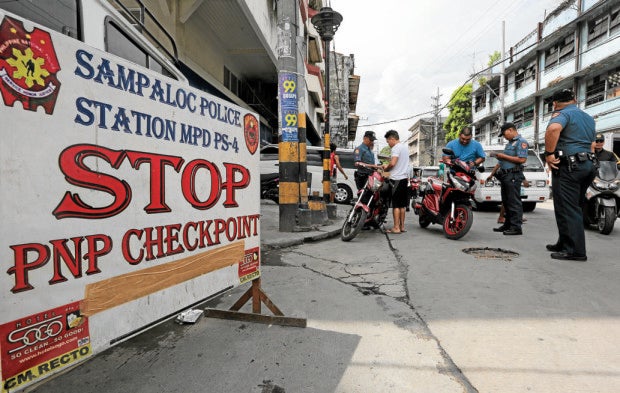 MANILA, Philippines — The Philippine National Police (PNP) is set to establish checkpoints in strategic locations across the country to intercept guns, explosives, and other weapons of violence that could be used in crimes as the election season heats up.

The police will set up the checkpoints past midnight on Sunday, Jan. 13, the PNP said in a statement issued on Saturday.

The police will conduct simultaneous checkpoint operations for the 2019 elections in pursuant to Resolution No. 10468 of the Commission on Elections (Comelec), as directed by the memorandum issued by PNP chief Director General Oscar Albayalde through Deputy Director General Archie Francisco Gamboa, Deputy Chief of the PNP for Operations.

Under the memorandum, regional directors of the PNP were ordered to establish at least one checkpoint in each of the 1,600 cities and municipalities in the country in coordination with the Comelec’s local officer and the territorial unit of the Armed Forces of the Philippines in the area.

The memorandum also directs regional directors to personally lead the launching of the checkpoint operations, the PNP said.

Meanwhile, the Regional and Provincial Election Monitoring and Action Centers that will monitor all activities and significant accomplishments related to the elections will also be activated on Sunday, according to the PNP.

The 150-day election period officially starts on Jan. 13 until June 12.

The Comelec earlier said the 2019 election gun ban will be implemented during this period. /jpv