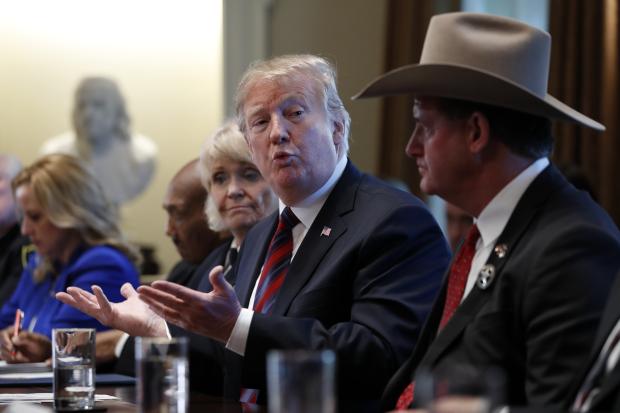 Here’s what’s up with the partial government shutdown on Day 22.

The shutdown officially is the longest in U.S. history, eclipsing a 21-day closure that ended Jan. 6, 1996, during President Bill Clinton’s administration.

The House and Senate adjourned for the weekend, with lawmakers scattering to their states and districts before snow blankets the nation’s capital. With no negotiations expected during the weekend, the shutdown will enter its fourth week next week.

Miami’s airport will close one of its concourses most of Saturday, Sunday and Monday to make sure security checkpoints are adequately staffed as the shutdown begins to strain the aviation system. Security screeners who aren’t being paid are staying home and safety inspectors are off the job.

Quotes of the day

“This is where I ask the Democrats to come back to Washington and vote for money for the wall, the barrier. Whatever you want to call it, it’s OK with me. They can name it whatever, they can name it peaches.” — President Donald Trump.

“That is not a historical claim that I think any president or any Congress should want to make.” — Sen. Lisa Murkowski, R-Alaska, on the shutdown becoming the longest ever in U.S. history.

The shutdown enters its fourth week next week, with Trump’s threat to declare a national emergency still on the table.

Assessing the health of the U.S. economy may be complicated by an even more prolonged shutdown. The shutdown already has delayed or distorted key reports on growth, spending and hiring because workers who compile the data have been furloughed.

Government data on home construction and retail sales won’t be released next week, while the next report on the economy’s overall growth — set for Jan. 30 — won’t be released if the shutdown remains in effect.

Nine of the 15 Cabinet-level departments have not been funded, including Agriculture , Homeland Security, State, Transportation, Interior and Justice. Some iconic National Park facilities are shuttered as are the Smithsonian museums and the National Zoo in Washington.

Nearly everyone at NASA is being told to stay home, as are most at the Internal Revenue Service, which processes tax returns and issues refunds, though the administration says it will issue refunds during the shutdown.

Who is at work but not getting paid

Some 420,000 federal employees whose work is declared essential are working without pay, including the FBI, TSA and other federal law enforcement officers. Some staff at the State and Homeland Security departments are also working without compensation.

The House and Senate have voted to ensure that all federal employees will be paid retroactively after the partial government shutdown ends. The bill now heads to President Trump, who is expected to sign it. /atm