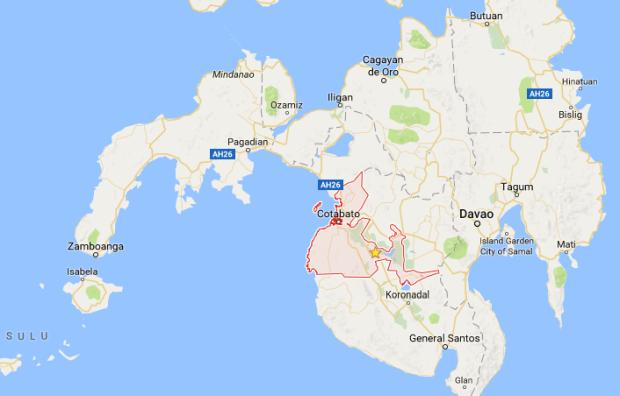 Lt. Colonel Harold Cabunoc, commander of the 33rd Infantry Battalion (IB), told the INQUIRER that Army and police units launched a “lightning attack” on a lair of the Bangsamoro Islamic Freedom Fighters (BIFF) at about 3 a.m. on Saturday in Paglat town in Maguindanao.

“We launched the counter-terrorist operation after learning of the presence of bombs in the village of Palagad, Paglat town,” Cabunoc said.

“Our informant showed us the pictures of terrorist bombers Ustadz Yasser Saligan and his cohort, Sheik Makakena, a.k.a. Abu Jihad, as they detonated a bomb to test its lethality,” said Cabunoc.

He said, “We had been tracking the suspects since November 2018.”

Under the cover of darkness, elements of the 33rd IB, backed by 4th Special Action Force (SAF) Battalion, Criminal Investigation and Detection Group-ARMM and Maguindanao Provincial Police Office, swooped down on the terrorist lair.

“We seized four improvised bombs and three caliber .45 M1911AI pistols from the suspects,” he said.

However, two primary suspects, Abu Jihad and Ustadz Yasser, managed to elude arrest by jumping into the Liguasan Marsh.

He said the BIFF were planning to bomb civilian and military targets in urban communities in Sultan Kudarat and North Cotabato.

At 10 a.m. Saturday, the raiding team proceeded to Barangay Makainis in Gen. SK Pendatun town to receive five BIFF members, including a commander, who surrendered.

They belonged to the BIFF faction of Commander Mayogantong Bansil, a notorious rebel involved in attacks on civilians and the military.

Cabunoc said Bansil sent surrender feelers after knowing the presence of security forces in the adjacent town of Paglat some 5 kilometers away.

“His relative contacted me by phone to confirm his willingness to lay down his arms. He was afraid that we will launch offensives against his group on the same day,” added Cabunoc.

The weapons will be presented to Brig. Gen. Robert Dauz, commander of the 1st Mechanized Infantry Brigade, which has operational control over the 33rd IB.

Dauz has commended the operating troops for their latest feat against terrorism.

“You have shown the expertise in handling the security threats without incurring casualties. Share these best practices in the conduct of operations to all Army units in Central Mindanao,” said Dauz, who earned his first-star rank last week.

Major General Cirilito Sobejana, commander of the Army’s 6th Infantry Division, said the BIFF’s “world is getting smaller every day.”

“We have won the support of the people in Central Mindanao. The people themselves have voluntarily provided information about the hiding places of the terrorists,” Sobejana said. /cbb