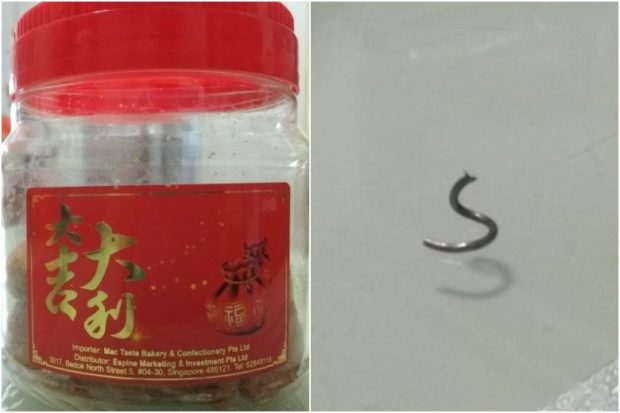 SINGAPORE — All Ms Foo Yen Pyng wanted was to enjoy an early Chinese New Year snack. But when she bit into it, she was horrified to feel something hard and sharp.

Promptly spitting it out, she saw that it was a piece of metal that had been hidden in her kok zai.

“I was so surprised… Had I not been chewing slowly, I could have swallowed it!” said the 48-year-old analyst.

She told The Straits Times on Saturday (Jan 12) that her 76-year-old father had bought the mini peanut puffs last week from a Giant supermarket at Block 316B Ang Mo Kio Street 31, near their home.

In response to ST’s queries, a Giant spokesman said that it takes food safety and quality issues very seriously.

“We immediately conducted a random check on a similar batch of the product at the store but no similar issues were found,” said the spokesman.

Giant has since removed the product from all stores pending the outcome of investigations. It added that its quality assurance and food safety team is working with the distributor and supplier to look into the issue.

It has also apologized to the customer and will be arranging for a refund.

Photos provided by Foo to ST show that the snack comes in plastic containers with red packaging, has a net weight of 300g and is a product of Malaysia. The product is certified halal.

The importer is listed as Mac Taste Bakery & Confectionery, while the local distributor is Espine Marketing & Investment.

A curved, hook-like metallic object can be seen in one photo.

In a reply to Foo, Mavis Ong, head of customer service for Dairy Farm Singapore, Giant, offered her assistance and said she was looking into the matter urgently.

“Please allow us some time to conduct a full inquiry and follow up with you on Monday,” she added in the e-mail sent at about noon on Saturday.

Separately, Foo said she has reported the incident to the Agri-Food and Veterinary Authority (AVA).

AVA confirmed it has received feedback on the incident and said it would look into it.