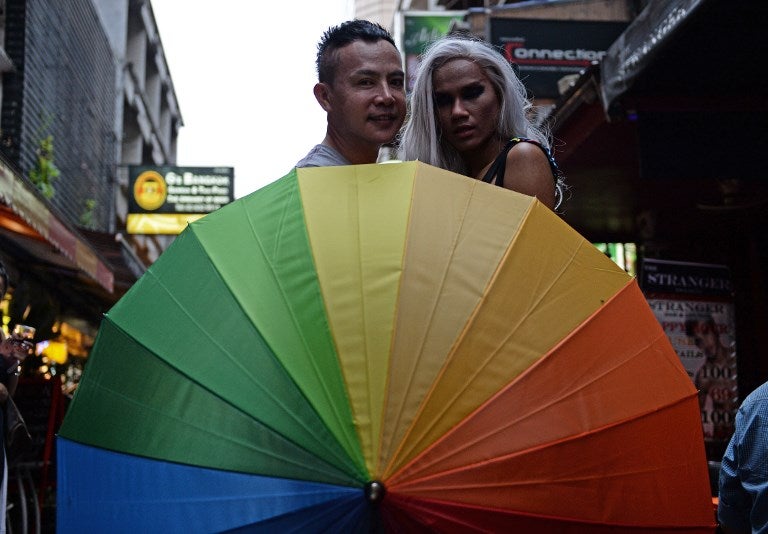 BANGKOK — The Life Partnership Bill still has a long bureaucratic path ahead and an election and post-election uncertainty to endure before it could become law. But its recent approval in the Cabinet was an important initial step in making Thailand the first country in Southeast Asia to legally recognize same-sex civil partnerships.


With a social climate widely seen as tolerant towards non-heterosexual orientations, Thailand has been called a haven for the gay and transgender lifestyle. The authorities are increasingly seeking to capitalize on that global reputation by encouraging more visits by foreign LGBT tourists, as well as the rights activists and artists who support the community.


Both the public and private sectors are preparing to host events that will appeal to that social segment.

The Tourism Authority of Thailand (TAT) runs marketing campaigns aimed at LGBT tourism and, among many other plans, the Hong Kong-based Sunpride Foundation will next November be bringing Asia’s largest LGBT art exhibition to Bangkok.


“LGBTQ are seen as a high-potential market with an above-average level of disposable income,” TAT deputy governor Srisuda Wanapinyosak told The Nation Weekend. “In tourism terms, they tend to travel more frequently than the demographic average.”


In a recent report, LGBT Capital estimated the global LGBT population at 496 million, with 4.5 million LGBT people living in Thailand. Global purchasing power was calculated at US$3.6 trillion and spending on tourism at $5.3 billion.


Srisuda said the TAT had begun targeting this segment five years ago, but the market remained niche and hasn’t yet reached its full potential. With the Cabinet’s endorsement of the Life Partnership Bill, though – however troubled its future might be – the marketing is growing more aggressive both domestically and globally.


“The key to tapping into the LGBTQ market is to understand the diversity of preferences and respond accordingly,” she said. “It’s also important to welcome LGBT people genuinely and not be superficially ‘LGBT-friendly’.”


There are three main components to the TAT drive – events spanning entertainment and lifestyles like the Songkran festival and the Wonderfruit and White Party gatherings; high quality in the destinations, hospitality and cuisine on offer; and legal support from the government.


The TAT hosted an LGBTQ symposium in Bangkok in September that drew travel agents from 50 countries.


This month Srisuda will lead a road show in Spain. About 20 Thai tour operators will join her at Fitur, an international tourism-trade fair being held in Madrid.

“Fitur is one of biggest tourism fairs in southern Europe and features a Gay Pavilion,” she said. “Thailand will have a presence as usual, but this year for the first time we’ll also have a booth in the Gay Pavilion.”


Spain, of course, has already had a good look at Thailand. Spaniard Angela Ponce Camacho was in Bangkok in December as the first transgender contestant ever entered in the Miss Universe pageant. She used her time well, raising awareness

about gender and LGBT issues as well as boosting Thai tourism on Instagram.


“LGBTQ is a game changer for the tourism business in Thailand,” gender academic Thitirat Duangkong told The Nation Weekend.


“Gender diversity and equality are goals of the United Nations and other global bodies and are even part of the election platforms for some Thai political parties. So it’s quite relevant to the tourism business,” added the guest lecturer at Thammasat University.


“We’re stepping forward ahead off our neighboring countries like the Philippines and Singapore, so we’re on track.”


“LGBT people have purchasing power and also tend to be creative,” he said. “Our new Big Data platform will provide information about all target groups, including LGBTQ. They can easily select destinations, activities and services designed specially for them and book online.


A year from now the Bangkok Art and Culture Centre will be in the midst of “Spectrosynthesis II: Exposure of Tolerance: LGBTQ in Southeast Asia”, a sprawling exhibition of regional contemporary art with more than 200 pieces by 50 artists. That runs from November 23 into March 2020.


The Sunpride Foundation show debuted in Taiwan in 2017 to critical acclaim. Bangkok will be its second stop.


“Bangkok is my second home and Thailand is the most friendly LGBT country in Asia,” said Sunpride founder Patrick Sun of Taiwan.


“There have been major LGBTQ shows in Europe in recent years, but with the second Spectrosynthesis for artists with roots in Asia, we’re able to share a more distinctively Asian narrative,” said Chatvichai Promadhattavedi, a former Culture Centre director serving as curator for the coming exhibition.


One of the artists involved, Sudaporn Teja, is actually planning to send out a message about the Life Partnership Bill in its current form, which she said falls short of ensuring equality for gender-diverse groups.