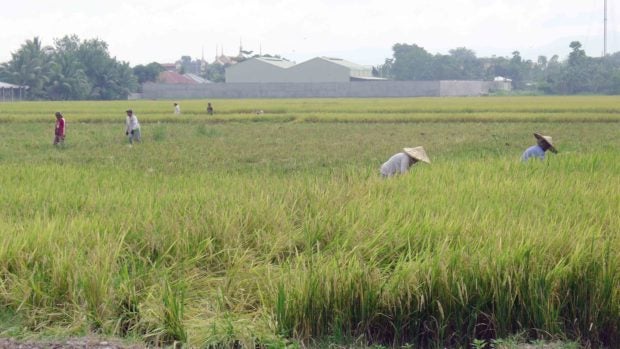 KORONADAL CITY — Farmers in South Cotabato were bracing for losses as prices of palay plunged to P14 per kilogram just as the National Food Authority (NFA) dangled a new program, which promised to make farmers earn more for their harvests.

Dianne Silva, NFA regional director, said on Sunday that farmers could earn P20.40 per kg if they sold their harvest to the government.

The NFA currently buys palay for P17 per kg plus what the agency called incentives of up to P3.40 per kg for individual farmers, according to Silva.

“This new program of the NFA seeks to gain additional income for farmers and help the agency in securing available and enough food during calamities through buffer stocking,” Silva said in a statement.

Cooperatives or farmers’ groups could get up to P20.70 per kg, including incentives, if they sold to the NFA, Silva said.

Private traders buy palay for P23 per kg as of July last year. The price went down to P17.50 per kg in December, according to results of monitoring by the Inquirer.

Provincial Board Member Romulo Solivio, chair of the board’s committee on agriculture, expressed alarm over falling farm-gate prices of palay.

Solivio said farmers were groaning under the weight of losses expected from the price decline.

He said the current situation did not warrant a decline in farm-gate palay prices in South Cotabato.

Prices of commercial rice at markets in the province now hover at P40 per kg or above, depending on the grade, according to Solivio.

In July last year, prices of premium commercial rice breached P50 per kg and stayed there for several months.

President Rodrigo Duterte was expected to sign the rice tariffication bill into law, which the administration certified as an urgent legislative measure in October.

The rice tariffication bill sought to streamline rice importation and allow private traders to import the staple from countries of their choice.

Solivio said the board’s agriculture committee would conduct an inquiry.

Results would be transmitted to Agriculture Secretary Emmanuel Piñol and Sen. Cynthia Villar, chair of the Senate committee on agriculture.

Owing to the NFA’s higher buying price for palay, Silva said “a lot of farmers and farmers’ groups are now opting to sell their produce to the grains agency than to the private traders.”

Individual farmers, or walk-in clients, are allowed to sell 200 bags each as long as they secure certification from their village leaders, according to Silva.

They would be allowed to sell up to 700 bags each if they owned at least five hectares.

They need to present land titles though, and have a bank account where the government can transmit payment.

“We trimmed down the number of requirements for farmers to immediately receive their payment,” Silva said.

“For the individual farmer, we immediately pay them upon delivery,” she said.

The regional NFA’s warehouses have a capacity to store at least 1,658,000 bags, the regional office said, noting they still had space for at least 1,500,000 additional sacks.