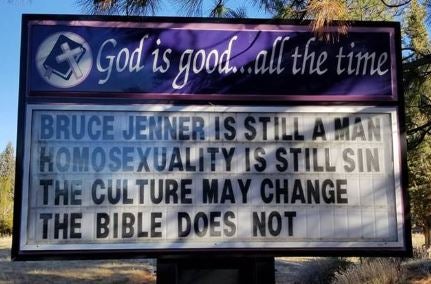 One pastor from California, United States was recently removed from his church after putting up a controversial sign in the beginning of the year.

The sign condemned transgenders and homosexuality as it read: “Bruce [Caitlyn] Jenner is still a man. Homosexuality is still sin. The culture may change, the Bible does not.”

It did not take long until the sign drew flak from the community. Hoke took to his Facebook account last Jan. 10, where he stated that the sign had been vandalized. In his photo, it can be seen that some of the letters have been removed, particularly the ones making up the words that describe homosexuality and Jenner.

“I woke this morning to find that our sign had been vandalized. They broke not only the plexiglas and stole some of the Letters, they also busted the power box,” he wrote to his readers. “I have not seen it up close yet as this picture was sent to me by a member of our congregation. Please pray that God would provide.”

Protesters from the area took to the church last Jan. 6 where they waved rainbow flags and signs that read “All we need is love” in support of the LGBTQ+ community, as per the SFGate on Jan. 10.

Amelia Mallory, who was one of the three women who organized the “Shastina Love Rally,” shared that their protest was not in any way meant to denounce the Christian faith.

“We’ve really had to refine our message to be one strictly of love and support for anyone who feels like they are the target of the sign,” Mallory was quoted as saying. “Debating religion is unproductive, for one, and we also don’t want anyone to feel like we are against Christianity as a whole.”

I woke this morning to find that our sign had been vandalized. They broke not only the plexiglas and stole some of the…

Hoke, on his end, updated his readers and told them he was no longer pastor of the Trinity Bible Presbyterian Church on Jan. 13.

“I was informed by our other elder that he felt he could no longer follow my lead as Pastor of TBPC,” he said. “I was informed that essentially all but one couple in membership would leave the church if I continued as pastor of TBPC.”

As of today, I am no longer the pastor of Trinity Bible Presbyterian Church.After much prayer and counsel, I have…

Hoke added that the couple and another church elder felt that those who left the church would come back if he left.

“Our other elder was agreeable to stay and assume the pastoral responsibilities,” he explained. “Therefore it was determined that it would be in the best interest of the local body for us (TBPC and the Hoke family) to part ways.”

The pastor has since changed the “Work” section of his Facebook profile to “former pastor” of the church. Cody Cepeda/JB