What is it? It is described as a “studio flat” but, more technically, it is “a small kitchen someone put a bunkbed into”;
Where is it? Cricklewood, which is just one of those made-up places that occur in clusters out in the wilds of north-west London, and one I assume is just a holding keep for lost Camden goths who, dazed on a combination of day-drinking absinthe and inhaling incense sticks, wander lonely into Cricklewood, where they make a big nest out of old leather trench coats and chewed up jet-black shag bands;
What is there to do locally? Nothing. Cricklewood has a big Lidl and two nearby graveyards, that’s it. The main road running from Kilburn up through Cricklewood proper, though, is called “Shoot-up Hill”, and I was looking up the etymology of that (I’m horny for words, OK! I fuck words!) and came across this: “Shoot-up Hill is in Kilburn, north west London and Shooter’s Hill, south of the river in Greenwich. The latter reputedly gets its name from being a place of medieval archery practice. It’s likely therefore that the Kilburn street is the equivalent. Shoot-up Hill causes some jocularity with locals as it is an area where there are quite a large number of homeless hostels (associated with drug abuse).” We have a laugh, don’t we. At the homeless people addicted to drugs;
Alright, how much are they asking? £672pcm to you, though before you have the intrusive thought ‘hey: that’s almost reasonable!’ please wait until you see it.

There is something very appealing about the sheer metal-on-metal practicality of an airlocked bunk in a sci-fi movie, is there not. You have been frozen in stasis for 80 years or something, while your super-hauler flies slowly towards the sun. You have awoken from a dreamless slumber and all your family on Earth, hundreds of thousands of miles away, have folded and crumpled and died. You make instant coffee in a small kitchenette. “Passenger #4535212,” someone says, as they ssssht through the vacuum-sealed door to your room. “It’s time.” Big alarm goes off and some crucial part of the mega-tanker breaks off into space, that sort of thing. You have to go through a crawl space to fix some vital component of a zero-gravity gatling gun. You own two vests, two jump suits, exactly one locket or trinket that you smuggled on board to remember a lost love by, and nothing else. You don’t even have keys because you use your fingerprint. As the alien pads metallically around deserted corridors smeared in black blood and bathed under flickering light, you, watching at home, think detachedly: I could live a minimalist life like that, couldn’t I? You think about filling a bin bag full of fleeces and unread books and taking them down to the charity shop. Maybe I only need to own, like, six things. Never going to do it, though, are you? Never going to do it.

Though maybe you could do it, now, here, in Cricklewood, where someone is selling a bedroom, nominally, but in reality it’s an already quite small kitchen that someone’s nailed a bunkbed into the top of. Look: 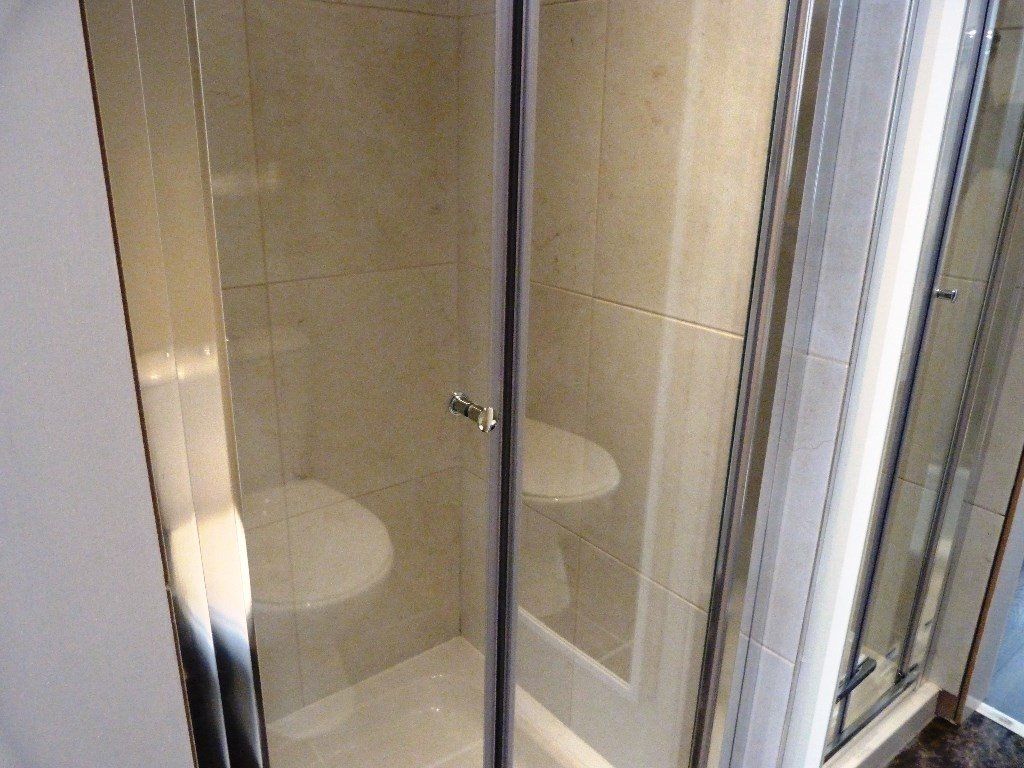 Assorted notes: this one actually bought out a whole, new, strange genre of reaction in me, so desensitised now am I to shithole flats: a sort of hollow, joyless laugh, partly at the absurd and partly at my own psychic exhaustion, sounded a bit like this: “[deep inhale, like an ancient cave cracked open for the first time in millennia and flooded with, for the first time in centuries, fresh and un-rancid air] huh–heh [distant sound of bells clanging in Victorian smog, to represent the soul dying out of my body]”.

The most depressing aspects of this flat, in order:

– The fact that the small patch of laminated floor beyond the kitchen and not directly underneath the bunk is what constitutes your “leisure space”, though what exactly you are supposed to put in that space – a sofa-chair, to watch a very small television opposite? A table, so you don’t have to climb up into your bunk to eat your dinner? There isn’t space for either – I don’t know.

– There is absolutely no storage space beyond your kitchen cupboards, so I suppose you’d have to fold all your T-shirts and jeans up in that, next to the lentils, the beans, the honey.

– The fact that the cardboard protective shell is still in place on the kitchen hob, meaning it has been newly installed, meaning some time in the last maybe six months or so – in the year of our lord 2018! – someone actively decided to take this room, install a kitchen and a bunkbed in it, and try to rent it out for close to seven hundo a month.

– That the extractor fan is directly by where your pillows are located on the bed, so if you cook or in any way generate smoke or vapour (perhaps with a pre-bedtime shower) that thing is going to be squealing for a good 20 minutes while you try to get to sleep.

– That the bathroom door is a curtain with a ladder directly in front of it.

– That the bathroom itself is a narrow bed-width space with a shower and a toilet somehow crammed into it.

– That it is in Cricklewood.

The listing advertising this flat specifies “DSS considered”, which is a rare treat in the world of Gumtree property listings: normally, landlords – who, as a Guardian investigation found earlier this month, are guilty of “ripping off” this country’s councils by posing as a salve for the homelessness problem – normally landlords are very reticent to rent their shitholes to those on housing benefits, the read-between-the-lines messaging being, “We want a fine, upstanding job-haver to occupy our narrow and illegal shit-tip.”

But what could be perceived as an act of beatific charity from the landlord in question here is actually a lot darker if you zoom out even a bit: housing benefit claimants, already narrowed out of a number of housing options in the city, being forced into a mad bunkbed-and-microwave situation out of sheer desperation, the council fattening another landlordian wallet in exchange for someone’s brief safety and the chance to shit behind a curtain. The cold terror of outer space doesn’t seem so bad now, does it? Let’s go hurtle ourselves into the sun and die that way instead.