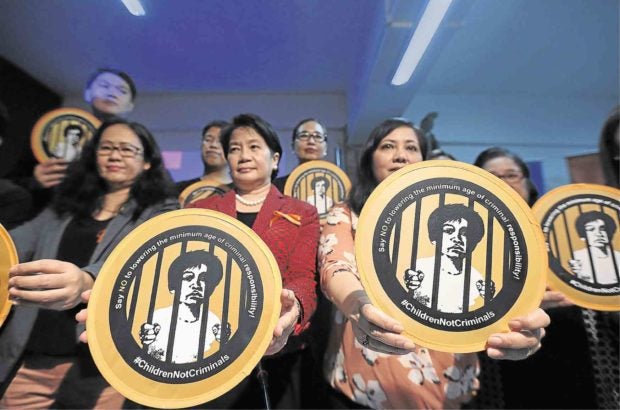 Members of the House of Representatives and senators have started tackling separate versions of a controversial measure to amend a juvenile law to lower the age of criminal responsibility for children from the current 15 years old before their current terms end in June.

Oriental Mindoro Rep. Salvador “Doy” Leachon, chair of the House justice panel, opened debates on the measure on Tuesday, a day after the committee approved House Bill No. 8858, which he sponsored, to lower the minimum age to 9 years old.

Under the bill, which would amend the 13-year-old Juvenile Justice and Welfare Act (JJWA), children under 9 years old would be exempt from criminal liability.

Those who are 9 years old and above but under 18 also would be exempt from criminal liability, unless they had acted with discernment.

Leah Tanodra-Armamento, a member of the Commission on Human Rights (CHR), warned that child offenders may only end up in congested jails.

“This will not only be a nightmare to the child, but also to jail management,” she said.

The Unicef earlier said the plan would not deter crime gangs.

“If lowering the age of criminal responsibility to 9 years old is meant to protect children, what’s going to stop syndicates from exploiting even younger children?,” said Lotta Sylwander, the UN agency’s representative in the Philippines.

Defending the bill, Leachon clarified that children who have committed serious crimes would not be imprisoned or tried as adults.

“They will not be put in a cell with adults. Instead, they would be put in a reform facility,” Leachon said.

The bill also would impose maximum punishment on criminals who exploit children.

Leachon added that under the proposed law, children with suspended sentences, upon reaching 18, would continue to be held until they are 25 years old, up from 21 in the old law.

“We are putting a child in harm’s way instead of helping him or her. Imagine the trauma we are putting them through,” he said.

In a letter to the justice committee on Tuesday, Deputy Speaker Pia Cayetano also opposed the bill, which would open a child to criminal prosecution.

“It would be unconscionable to hold a child criminally liable when it is clear that it is their environment, home or community that exposed them to violence and other antisocial behavior,” she said.

“We were all 9 years old once. Who among us understood the world when we were 9 years old?” he said.

Others saw no reason to lower the age in the first place. Instead, they pushed for the proper implementation of the JJWA, after learning that one key provision—requiring local governments to establish “Bahay Pag-asa,” or youth rehabilitation centers—had been poorly implemented.

Juvenile Justice and Welfare Council Executive Director Tricia Oco told a Senate hearing on Tuesday that there were only 63 such centers in the country.

The law provides that at least one should be established for each of the 81 provinces and 33 highly urbanized cities.

Many do not meet the minimum standards for staff requirements, some do not have adequate food and others have “subhuman conditions,” Oco said.

“Some Bahay Pag-asa are worse than jail,” she added.

Senate Minority Leader Franklin Drilon said gaps in the implementation of the JJWA must be examined, particularly the responsibilities of the local governments.

Sen. Richard Gordon, the justice committee chair, told reporters he would push for lowering the minimum age of criminal responsibility to 12 years old to make children understand they must be accountable for their actions.

Senate President Vicente Sotto III, whose bill sets the minimum age to 13, was amenable to lowering it to 12.

Sotto said his proposal was not about children being used by syndicates, but about holding children who commit crimes on their own accountable for their actions.

Sen. Antonio Trillanes IV said he would oppose any move to lower the age to 9 for being “antifamily, antipoor and simply unjust.”

“Moreover, it will promote a heartless and ruthless society that has no regard for its own people,” Trillanes said.

Sen. Grace Poe maintained her position not to change the minimum age from 15.

“By lowering the age of criminality to 9, we will be creating kindergarten prisons, and instead of rehabilitating children, these will become finishing schools for young criminals, their impressionable minds tutored by the best in the trade,” she said.

Sen. Panfilo Lacson, a former Philippine National Police chief, said he would support lowering the age of criminal liability if the offender acted with discernment, if sentencing would be suspended until the offender reached the age of majority, and if there were enough reformative facilities in the country. —With reports from Marlon Ramos and Patricia Denise M. Chiu