Will Bromley’s mum reckons he could have put a deposit down on a house with all the money he has fed into Big Buck Hunter.

“Yeah, that’s true but I could have also put a deposit on a house with the amount of dope I’ve smoked in my life, the amount of alcohol I’ve drank,” Bromley laughs. I ask him if he could possibly put an exact number on the amount of cash he’s fed into the Big Buck Hunter slot at his local.

It’s a hot day in Newtown and Bromley is wearing thongs and boardies, a trucker hat and his Big Buck Hunter World Championship T–shirt. It’s a pretty unassuming costume for someone who is revered—in certain circles—as an elite athlete. Because as it stands he’s the fourth best Big Buck Player on the planet. 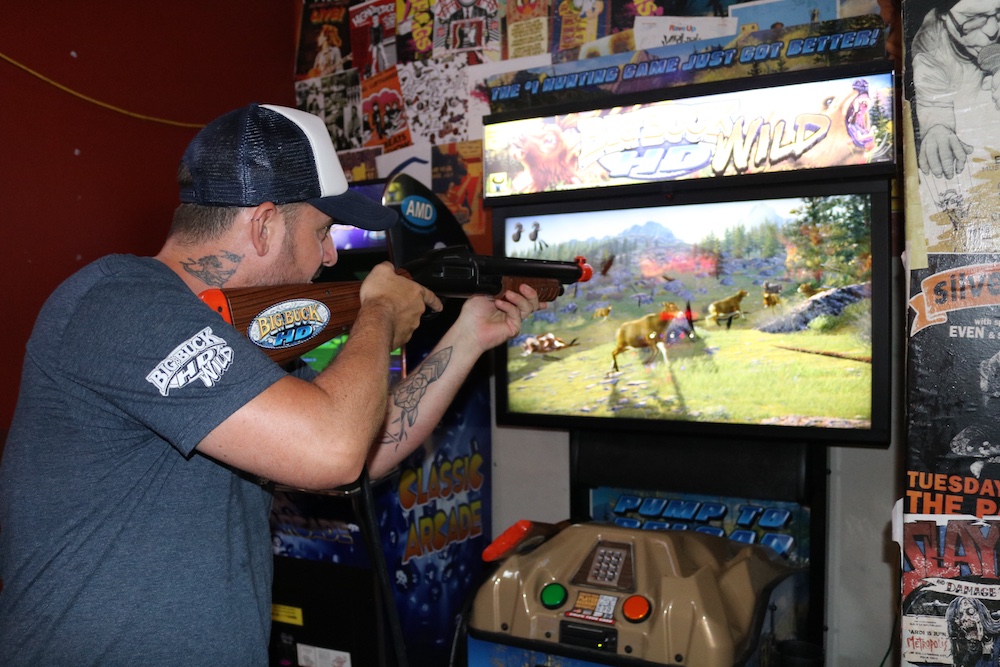 “It was insane,” says Bromley when I ask about Vegas. He describes how he blacked out on the first night and woke up to find that he’d blown $600 USD on drinks and gambling. “I don’t gamble, I hate the pokies,” he says, explaining that he was only drawn to the roulette table because the creator of Big Buck Hunter was sitting there with some of the other top American competitors.

On the second day, Bromley took it easy and tried to get some decent rest before the tournament. “I gave myself a little pep talk in the mirror, I looked at myself and was like, ‘You’ve got this Will, whatever happens happens, just go and have fun, don’t put too much expectation on yourself.’”

The World Championships saw 64 players facing off one-on-one in shoot out mode, which is where two players shoot bucks simultaneously. Bromley had qualified in sixth place. “I just wanted to get in the top 10, you know?” he says. “I went into it with that premise. I knew my ability, I figured I’d just take every game as it came and it just so happened that I just kept on winning.”

Bromley ended up coming fourth, two slots higher than he’d qualified. He was stoked, not just with the result and the $7,000 USD prize money, but to get the opportunity to get to know the Big Buck community a bit more. “We all feel like a family,” he says. “There’s very rarely tension between players. We’re all really supportive of each other… It’s just one big party.”

For more pub-style content, check out our investigative documentary on the ingredients in chicken salt.

Unlike the majority of arcade games, Big Buck Hunter’s culture is strongly built around bars and drinking. This tends to deter kids and more reclusive gamers. While there are a few serious players who own their own machines and have them installed in their basements, Bromley reckons it’s more common for a serious player to buy a Big Buck console and install it at their local pub, making money off it when they’re not playing.

When it comes to technique, Bromley still remembers his breakthrough epiphany. “It was about eight years ago that I realised it was distance shots that gave you the maximum points, not accuracy,” he says. “It was a major game changer for me and changed my whole style of playing.” Bromley then shows me his technique: shooting a particular buck in the rump twice, letting it run away towards the digital horizon, then shooting it dead from a long distance.

Beyond the drinking and bar culture of the game, the stereotype in the States is that Big Buck players are pro gun, pro NRA, Republican-voting and in some cases, ex-military. Bromley grew up in Newtown and went to the local performing arts high school. Living in Sydney’s inner west, he says he sometimes gets heckled by vegetarians or vegans, “mainly women [who] walk past and go, ‘that’s disgusting.’”

He’s keen to emphasise that “it’s just a game,” explaining that he shot a rabbit once in Tamworth and it “scarred me for life”. He says there’s “no fucking way” he would shoot a trophy animal and he thinks of it more akin to traditional pub games like pool and darts. “It’s all about just hand-eye coordination.”

When I mention that Bromley has had a pretty good run since late 2018, he mentions that he recently quit smoking weed, which has been good for him. “I gave up dope on the first of September, and I was a really heavy smoker and I was in a bad way, I was pretty depressed,” he says. “I was smoking bongs hardcore and even, because I was living upstairs from where I worked, I’d be saying, ‘Just gotta go to the toilet’ and then whip upstairs, have a bong and come back down.”

Within days of getting off the bongs, the beer sponsorship came along, then the Vegas trip and the $7000 prize money. Bromley paid some small debts, bought a car, an iPad, a UE Megaboom and took a road trip up to the north coast of NSW.

“I honestly do believe—I’m a little bit spiritual—that it was me starting to love myself again,” he muses. “The universe was rewarding me with all this good stuff. Good, positive stuff.”