Picture the scene: A criminal mastermind is preparing to carry out the most ambitious of bank robberies—for years, he has been quietly formulating a plan. To execute his heist, this guy carefully studied his target; he looked through the blueprints for an unexposed weakness, searching for the perfect blindspot to exploit. He picked his moment carefully and, undisguised, walked into the bank in broad daylight. Nobody noticed as he bypassed security and stealthily emptied the safe. He took every last thing he wanted before brazenly walking out through the exit, leaving the front door open behind him as he went.

Out in the street, a stray dog sees the open door and makes his way inside. Much to the dismay of everyone present, this dog takes a massive shit in the middle of the floor. The bank’s staff and customers are so distracted by this dog, now pissing up the walls, that nobody notices anything of value in the bank has already vanished. By the time they clock what’s happened, it’s far too late.

“Dick Cheney is the safe cracker,” explained a grinning Adam McKay. The contents of the safe in this scenario form some abstract concoction of political power, decency, and truth in America. “Donald Trump is just the random neighbourhood dog,” he adds. “Today everyone’s shouting about that damn dog, and they forgot about the guy who cracked the fucking safe in the first place.”

This isn’t the only analogy McKay uses to explain how Dick Cheney, Vice President in the George W. Bush administration, came to be in his crosshairs, but it’s probably the most useful in contextualizing just how much of a villain (in McKay’s eyes) the central character in his new movie, VICE, truly is.

McKay, an Academy Award-winning director and writer for his work in The Big Short, received another round of Oscar noms on Tuesday for VICE, including Best Picture, Best Director, and Best Original Screenplay. The film covers half a century of Cheney’s life and has an impressive cast. Christian Bale bagged a Golden Globe for his performance (in his acceptance speech he thanked Satan for inspiration) and earned an Oscar nom for Best Actor as well. But the most spectacular part of VICE is the fact so much of the story itself is true to the facts. As much as possible, explained McKay, it’s a work of nonfiction. He and his team read every book available, and a journalist was hired to interview Cheney’s associates and friends off the record. And they obliged.

“I didn’t know much about Dick Cheney, but as I started reading about him, I became fascinated with him, what drove him, what his beliefs were,” said McKay while sitting at a Central London hotel a week before the movie’s UK release date. So hectic is the schedule that he and his publicist have yet to step outside since touching down in London. But McKay doesn’t seem tired, rather genuinely impassioned by his film’s subject.

“I kept reading more and more, and was astounded by the shocking method through which Cheney gained power, and how much he has shaped the United States’ current place in the world,” he said. What struck McKay about Cheney’s story was how little the public actually knew.

“He’s most known for a quote ‘hunting accident,’ where he shot a guy in the face, and never apologized. That’s the main joke about Dick Cheney. And the second thing he’s known for in America is that everyone knew George W. Bush was wildly under-qualified to be president. He literally had a twelve-year gap in his employment record where he did nothing,” said McKay. “So there’s the idea that Cheney was really the one pulling the strings, but it was very much treated like a joke.”

Then there’s Cheney’s nickname: Darth Vader. The former VP kept having complicated heart surgeries but he “just wouldn’t die,” as McKay puts it. In Bush’s 2010 memoir, Decision Points, Bush even refers to perceptions of Cheney as “dark and heartless, the Darth Vader of the administration.”

McKay reckons that’s all most Americans know about Cheney, so when he started digging into his research, the fifty-year-old filmmaker couldn’t believe what he found. “He was able to get himself bcc’d on all the President’s emails, but the President wasn’t on any of his,” McKay said, kicking off a list of creepy sounding details. “Cheney had a guy, ‘Scooter’ Libby Jr. who technically outranked all of Bush’s own people.” Cheney even arranged it so he received the daily confidential White House intelligence briefing before the President himself. He was a driving force behind the invasion of Iraq; an architect of the War on Terror.

Even so, there were no famous speeches of note from Cheney, and he’s not a charismatic figure. In other words, there’s no definitive Dick Cheney “moment,” other than shooting a guy in the face. “We know that Donald Trump didn’t just happen,” McKay adds, “this has been building up in America for a while. It’s been a slow motion truck driving towards a wall. Trump is just the metal flying everywhere. There is no single answer to explain this mess, but Cheney gets us pretty damn close.”

If it’s possible to compare the Trump and Bush administrations, which is the greater evil? “Asking which was worse is like asking what’s worse: the knife cutting your skin or the blood which stains the carpet?” is McKay’s take.

“But people are saying they miss Bush. He was on Ellen DeGeneres dancing, and Cheney’s talking to a paparazzi from TMZ and laughing with him. It’s this crazy amnesia. It really started to feel like we’ve totally forgotten what they did. The Bush administration killed a million people, and they tortured people. Like, they really fucking tortured people. They outed a CIA Agent, and the world economy collapsed,” he added. McKay could clearly continue.

“Cheney can get stuff done,” he said, unapologetic in his disdain for his antihero. “If he was in there right now, it would be worse. I wouldn’t be surprised if we were invading Iran, if there weren’t journalists being arrested. Cheney knows how to use the government, Trump has no idea.” 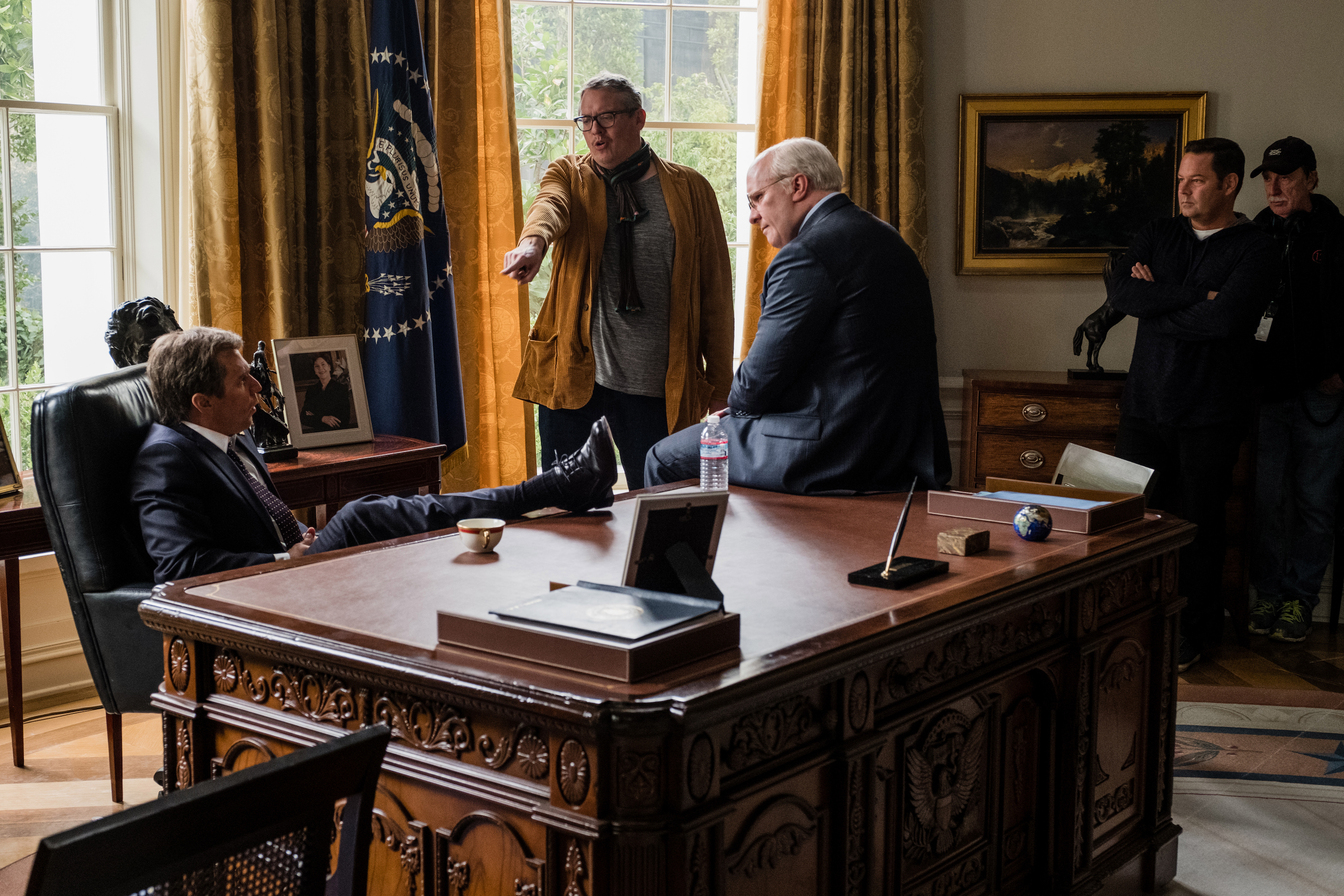 McKay grew up in Worcester, Massachusetts, in the late 1960s, a place he describes as being a “crappy town,” at least back then. Raised by a single mom, the family relied on food stamps, but he made it to college and left with few debts. Capital ‘P’ politics wasn’t an overt presence at home, but a healthy distrust of authority was instilled in him. One winter a 13-year-old McKay and his friends, with little else to do, started chucking snowballs at each other and parked cars. Some neighbourhood cops arrested him. “My mom drove up the police station and yelled at all the police: ‘How bored are you? You’re reading a child his Miranda rights for throwing snowballs? You should be ashamed of yourself,’” McKay recalled with a smile.

After dropping out of college just before graduating, McKay made his way to Chicago, flogging his comic book collection to pay for his move to the improv capital of America, and arguably the world. “In Chicago I had this teacher called Dale Close who basically invented long form improvisation, and I was lucky enough to have him as my teacher for four or five years,” he said. Close died in 1999, but it’s not the only time McKay mentions him. Having taught the likes of Tina Fey, Bill Murray, Amy Poehler and Mike Myers, Close’s approach to comedy still shapes the industry today.

Before long, McKay was eyeing a spot on Saturday Night Live. He got the audition, but straight away he could tell that playing big, bold characters, as was needed, just wasn’t where his talents lay. “Thankfully I took scripts with me and told the team I could write, and that’s how I got hired,” he says. He’d end up working on the seminal show for six years, but it was a friendship sparked during his first few days that would go on to shape his career. McKay and Will Ferrell were hired for SNL on the same day, and soon they were bouncing ideas off each other and would begin the work that would eventually turn them into big names.

The pair shared a sense of humour, as well as similar life experiences: same age, divorced parents, fathers who were musicians. “We just hit it off in a big way,” says McKay, again, grinning. After leaving SNL, they went on to write films together, including Anchorman, Talladega Nights: The Ballad of Ricky Bobby, and Step Brothers. “

All we’ve ever done is try and make each other laugh,” he added. “Like at the beginning of Anchorman, when he’s doing all those vocal warm ups? That’s just me trying to make him laugh. We were improvising off a script, but I’m just throwing out lines to make him crack.”

Commentators and critics have noted the tonal shift in McKay’s more recent work, from his light-hearted comedy collaborations with Ferrell, to increasingly serious movies like The Big Short. Yes, there are still laughs, both in that story of the financial crash and VICE as well. But was it a conscious choice to leave those wacky comedies behind? “The world has changed. It’s fucked, clearly,” McKay said. “I’d be a fool to be making Talladega Nights over and over again given where the world is at.”

Take the day after Trump won the presidential election, McKay was location scouting in New York for the pilot episode of Succession, the HBO series he executive produces and for which he directed the pilot. “It was like a bomb went off when we heard,” he recalled. “There were people in my crew crying; a lesbian couple distraught that now they might not be able to get married. I thought ‘at least we’re doing this show about the fucked up world.’ It was comforting.”

Conversation soon turns to the state of US politics today and, to summarize his thoughts: yeah, it’s all still fucked. There’s a knock on the door, I’m told our time is up. With the prospect of four more long years of Donald Trump now looming, I ask a final question. Is it right to keep laughing at such a dark and unpleasant time?

“Even when I talk just with my wife or friends about something particularly horrible, there’s always a part of it that I have to laugh at,” he said. “Like when the Republicans were putting beautiful little kids in cages for really no reason. It’s pure sadism and racism. I was in tears at one point over it, I was filled with anger, but then at a certain point I had to sit back and laugh at it because it’s so evil.”

McKay asks me to pretend I’m standing on the bow of the Titanic—another analogy. Having spent a month being told the ship is unsinkable you’re now the only person left, standing on the tip descending into the water and about to die. “Do you laugh or do you cry?” he asks. “I laugh, I have to laugh,” he jumps in, no need for me to answer. “Because fucking hell they talked about how it was unsinkable! It’s the first voyage, and we’re about to go underwater. I may cry, but I’m definitely going to laugh as it happens.”