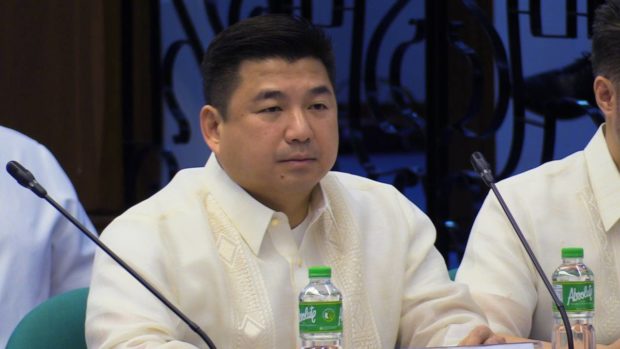 MANILA, Philippines — Davao-based businessman Dennis Uy admitted his closes ties with President Rodrigo Duterte and some of his Cabinet members when he faced a Senate probe on Thursday.

Uy made the admission when grilled by opposition Senator Antonio Trillanes IV during the hearing of the Senate committee on public services, which inquired into the government’s selection process of the third telecommunications player in the country.

The businessman is the chief executive officer of Udenna Corporation, which is part of Mislatel Consortium that was named last November as the country’s new major player.

Uy flip-flopped when Trillanes first asked about his closeness to Duterte.

“Are you close to President Duterte?” the senator asked, to which the businessman answered no.

“No, you’re not?” Trillanes asked again.

“I’m from Davao…” Uy said but he was interrupted by the senator, who pressed for a categorical answer to his question.

“Are you close to him or not?” Trillanes asked.

The senator next asked if the businessman was also close to the President’s former special aide, Bong Go. Uy also responded in the affirmative.

Uy flip-flopped again when Trillanes asked if other officials of Udenna also contributed to Duterte’s campaign.

“Hindi? Are you sure? May listahan ako dito,” said Trillanes.

The senator then enumerated some of the company’s officers, including Uy’s wife, Cherylyn Uy, who had contributed to the President’s campaign.

Uy confirmed all the names and contributions enumerated by the senator, including the financial assistance of his business partner, Efren Uy, board member of Chelsea Logistics Holdings Corp.

Aside from Uy’s firm, Mislatel Consortium is also composed of Chelsea Logistics and state-run China Telecommunication.

Uy also confirmed that Finance Secretary Carlos Dominguez III’s brother used to be a director of his Phoenix company.

Trillanes said the Finance secretary happens to be part of the oversight committee on selection of the third telco.

Uy also confirmed being with members of the oversight committee like Executive Secretary Salvador Medialdea, Dominguez, and National Security Adviser Hermogenes Esperon Jr in a private jet which the businessman partly owned.

Trillanes noted that during this time, the government was at the “peak” of choosing the third telco.

Uy also happens to be Duterte’s adviser on sports.