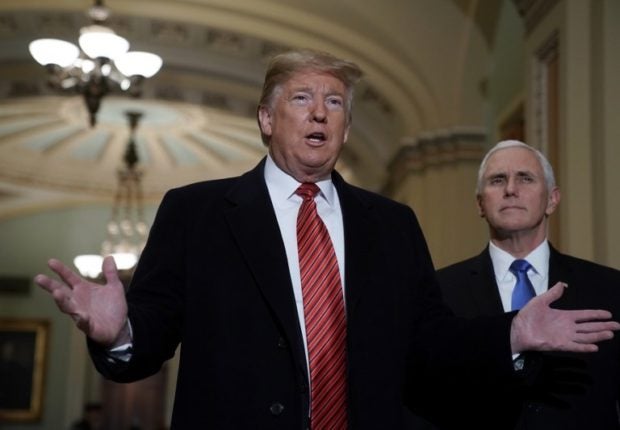 WASHINGTON — US President Donald Trump backed down late Wednesday in a spat with Democrats over his State of the Union address, agreeing to delay it until a government shutdown ends, although the more than month-long impasse dragged on.

The US Senate prepared meanwhile Thursday to hold two showdown votes on measures to reopen the shuttered federal agencies, but Trump’s toxic sparring with House speaker Nancy Pelosi essentially assured no solution was at hand.

An intensifying war of words between the president and Pelosi came to a head Wednesday with the top Democrat effectively blocking Trump from delivering his annual address in Congress until the partial government shutdown, now in its 34th day, is brought to an end.

But in a tweet sent after 11:00 pm, Trump wrote, “As the Shutdown was going on, Nancy Pelosi asked me to give the State of the Union Address. I agreed.”

“She then changed her mind because of the Shutdown, suggesting a later date. This is her prerogative – I will do the Address when the Shutdown is over.”

As acrimony in Washington grew, lawmakers across the political spectrum were left searching in vain for an exit strategy for the longest-ever halt to federal operations, as furloughed government employees and contractors vented their fury on Capitol Hill.

The prospects for Trump getting to deliver his national address in Congress next Tuesday as planned were dim, with the Senate votes — one on Trump’s proposal that includes money for his border wall and changes to immigration policy, the other by Democrats seeking to reopen government before negotiating border security — bound to fail.

Traditionally the president’s annual speech is delivered before a joint session of Congress in the ornate chamber of the House of Representatives.

In an effort to force the hand of Pelosi, who had already urged Trump to reschedule due to shutdown-related security shortcomings, the president wrote to her saying it would be “so very sad for our Country” if his speech could not be delivered on time and in the chamber.

Pelosi, who has become the face of Democratic opposition to Trump in Congress, pushed back, informing the president that the House would only agree to host him for his speech “when government has been opened.”

Trump now appears to have capitulated.

After his tweet late Wednesday agreeing to delay his speech, Pelosi tweeted back saying she hopes he agrees to a deal that opens the government.

‘Will work for pay’

The shutdown, which has seen some 800,000 federal employees left without pay for a month, was triggered by Trump’s refusal to sign funding bills in December, in retaliation for Democratic opposition to funds for extending walls along the US-Mexico border.

With the closure of about one quarter of federal agencies affecting millions of Americans, hundreds of unpaid government workers used the power of protest to publicize their plight, holding a sit-in for hours at a congressional office building.

Some held up paper plates with messages including “Will work for pay.”

With no solution in sight, many were bracing for Friday, when they expect to miss their second paycheck in a row.

The House, now controlled by Democrats, has passed multiple bills that would open government, but the Republican-run Senate is aligned with Trump’s push for border wall funding.

The Senate votes have the potential to break the impasse, but since each requires 60 votes to advance in the 100-member chamber, their passage is unlikely.

With both sides locked in their positions, Senate Majority Leader Mitch McConnell told the chamber “it’s time to make a deal.”

Even the Senate’s chaplain Barry Black took the rare step of weighing in, somberly intoning in his opening prayer Wednesday that “as some members of our armed forces seek sustenance at charity food pantries, and prepare to miss a second pay day, something has to give.”

Trump says he will not reopen government before his wall funding comes through.

Most Democrats oppose direct funds for wall construction, but some have begun publicly advocating for negotiating a solution that includes boosted border funding, including for border structures.

“We want to make sure that people who come into the United States are authorized to do so,” he added. “We’re for border security and I think we can get there.”

Government shutdowns are a disruptive political ritual that have occurred in various administrations and are almost unique to the American system.

This one is the longest on record, and has left a broad swath of federal workers unpaid — among them airport security officers, FBI agents, museum workers and US Coast Guard personnel.