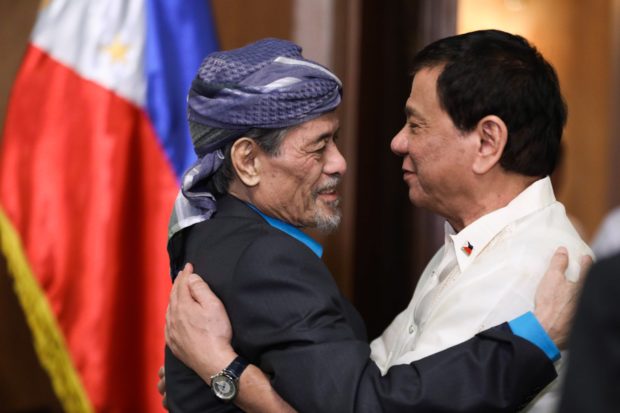 MANILA, Philippines – Moro National Liberation Front (MNLF) founder Nur Misuari would not be a threat to the Bangsamoro Organic Law (BOL), Malacañang said Thursday, after Sulu rejected the ratification of the new decree.

President Rodrigo Duterte has said he wanted to talk to Misuari to know his sentiment about BOL.

In a Palace press briefing, Presidential Spokesperson Salvador Panelo was asked if Malacañang views Misuari as a threat to the new law.

“Not really a threat. [Duterte] considers Nur Misuari as someone, with his group, [who] can help (end) the conflict in Mindanao,” Panelo replied.

Duterte on Monday said he was“very happy” with the initial results of the plebiscite to ratify BOL.

Residents from North Cotabato and Lanao del Norte will get to decide on whether or not to ratify BOL on February 6 after voters from ARMM, Cotabato City, and Isabela City in Basilan cast their votes on Monday on the fate of BOL.

“Well, as we said earlier, the President will respect the sovereign will of the particular electorate. But, winning does not mean that they will go against the law,” Panelo said.

The Palace official had earlier said Misuari told him he preferred federalism over BOL. /kga