A project to demonstrate a novel power cycle that promises to produce low-cost, reliable, and flexible power from natural gas—while generating no atmospheric emissions, and fully capturing carbon dioxide—is inching closer to commissioning. 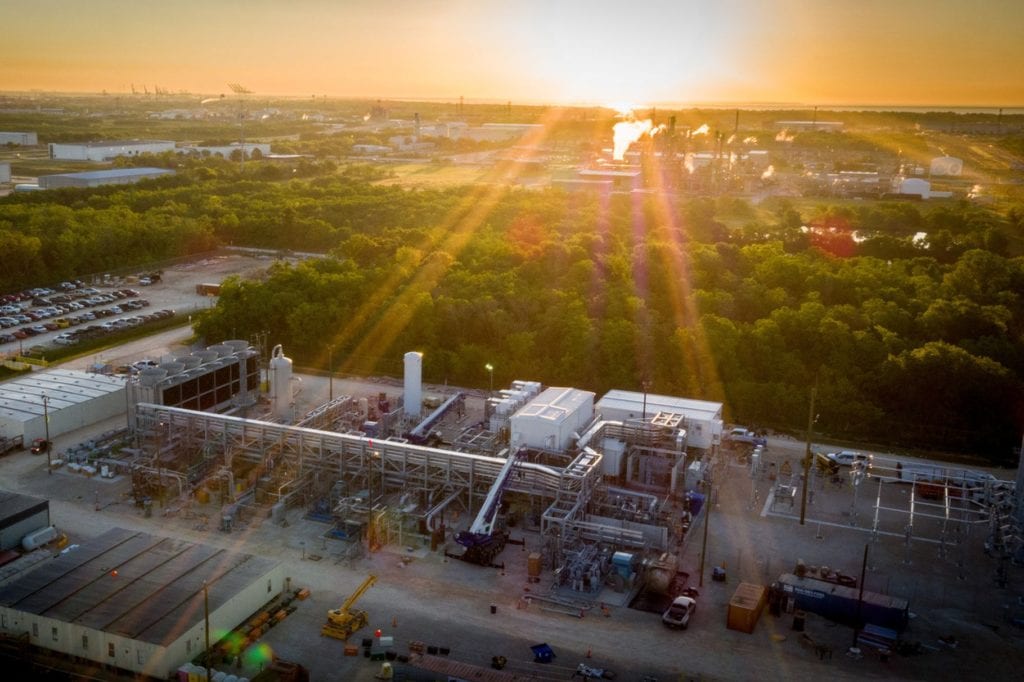 A mere 10 years ago, 8 Rivers Capital, a startup founded in 2007 by Bill Brown, a former Wall Street investor and Duke University law school professor, and Dr. Miles Palmer, an engineer and entrepreneur, gave up on trying to “fix” avatars of the same costly fossil-fired power solutions to make them integral in a clean energy future. They decided, instead, to design a fossil-based system from the ground up.

“What they do in a lean innovation model is they take a bunch of people who’ve been successful before, throw them into a shoe box, throw some cash into the shoe box, punch some holes in the bottom. And those people take the cash and iterate by throwing an unformed idea out into the market,” Brown, who is now the CEO of Durham, North Carolina–based NET Power, told POWER in March. “We turned the shoe box upside down. Instead of finding a pre-existing team from another startup, we decided to do it differently.”

To flesh out the firm’s ideas, he said, the company would ask a firm with necessary expertise for feedback. In that way, “Before we got any money, we had gone through many major corporations,” looking for that ideal opportunity. “We threw an idea to them, and they’d throw it back, saying, ‘Don’t do that—don’t do coal—do gas,’ ” he said. Then, in 2009, at the urging of an old college friend from the Massachusetts Institute of Technology, Brown got on the phone with Rodney Allam. “After an hour or two, I thought, no one knows this much,” he said.

Allam, who was a former head of technology development at Air Products, described a new thermodynamic cycle, which he claimed, controlled all emissions from the outset. After meeting Allam, and doing his own due diligence, Brown separately approached both Babcock and Wilcox and the Shaw Group for a quote on a pre-FEED (front-end engineering and design) for a test facility. As Brown recalls: “But when Shaw came back, they said, ‘Well, actually, we’d like to invest.’ ”

By 2012, 8 Rivers had gained several interested backers. Along with Shaw—which was part of CB&I, a company which last year merged with McDermott International—Exelon Generation signed on. As Mike Pacilio, executive vice president and chief operating officer with Exelon Generation, described it, the opportunity was too good to skip for Exelon, which operates the largest fleet of low-carbon generators in the U.S., and has a long history as an innovation backer.

“When we first assessed NET Power in 2012, we saw an opportunity to leverage Exelon Generation’s expertise in clean energy innovation and operational excellence to help develop and commercialize this novel, zero-emission, natural gas-fueled electric generation technology,” he told POWER in March. Exelon, specifically, was looking at the future. “Exelon Generation operates America’s lowest carbon fleet, by far. NET Power would make it possible to develop natural gas-fueled electric generation facilities with zero-carbon emissions, which could make our fleet even cleaner over time,” he said.

According to NET Power, the two most significant ways the Allam cycle makes oxy-combustion economic are by “relying on a more efficient core power cycle,” and by recycling heat within the system to reduce the oxygen and natural gas consumption, and associated costs of the air separation unit. The process is also environmentally friendly, it notes, because it produces no emissions—a major consideration as the decarbonization movement increasingly grips the power sector. Water, which is used at the demonstration, is also negotiable. “By switching to air cooling, NET Power plants actually become net producers of water while only seeing a minor efficiency reduction,” the company says.

Beyond that, the company also touts the technology’s operational flexibility, claiming turndown capabilities are beyond combined cycle and comparable ramping ability. “The ramp-rate could be 2% to 5% per minute from warm to hot start,” a spokesperson said. And, because the technology’s performance is resistant to ambient condition changes—such as altitude—a plant can be designed to use no water, and the technology could create new siting opportunities, for example, in non-attainment zones.

But another aspect about the novel project that is frequently cited by interested parties is its potential to draw revenue streams from byproducts along with sales of the electricity it produces.

As NET Power notes, the plant is inherently designed to capture CO2 and generate it as a “low-cost, pipeline-ready byproduct.” And, as a spokesperson told POWER, “a single plant is capable of producing enough CO2 to justify a 57-mile pipeline.” For now, the company anticipates that recent passage of 45Q carbon capture tax credits and growing needs for low-cost CO2 for industrial processes—such as for enhanced oil recovery (EOR), where injected CO2 can increase oil recovery by 10% to 25%—are poised to boost global demand of its technology.

The company says it is already “working with” an array of potential customers, including with oil and gas industries, on development opportunities. Last November, for example, it struck an investment deal (that is still awaiting regulatory approval) with Oxy Low Carbon Ventures, a subsidiary of international oil and gas exploration and production company Occidental Petroleum Corp, which uses CO2 for EOR. Though details are sparse, Occidental Petroleum’s Senior Vice President of Operations Support Richard Jackson noted in a press release, the “innovative low-carbon technology solutions will grow Occidental’s business while reducing emissions.”

The Environmental Protection Agency (EPA), too, seemingly recognizes this game-changing quality. In its December 2018–released proposed revisions of the greenhouse gas emissions rule for new or modified units, the agency declined to determine that carbon capture and storage (CCS) or partial CCS was a best system of emission reduction (BSER) for new natural gas–feed stationary combustion turbines because it “is exorbitantly expensive, has not been adequately demonstrated, and would not be available for a large number of existing sources.” It noted, however, “similar technologies—such as use of the novel Allam Cycle—are, while seemingly promising, still in the early demonstration phase.” The note suggests that if the Allam Cycle is commercialized, it is likely the agency could reconsider part of its finding—which would amount to a boon for NET Power’s proprietary technology.

At the same time, the company is looking at the technology’s potential to use flare and waste gases (including associated, acid, and sour gases) in the combustion process. That aspect “integrates directly with operations of oil producers,” Brown noted. Yet another avenue for growth involves integration with liquefied natural gas regasification terminals, where it could provide high-efficiency power generation and eliminate the need for gas-fired regasification.

The Road to Technical Achievement

To reap its vast potential, NET Power must first successfully complete the demonstration. That road has been ridden with technical challenges, and despite ambitions to begin operating commercial plants within the next five years, project development, which has been ongoing since 2010, has been delayed by a series of technical hurdles.

On May 30, 2018—after two years of quiet development—NET Power marked perhaps its most important milestone: It achieved first-fire of a commercial-scale 50-MWth combustor that was engineered and manufactured by Toshiba Energy Systems & Solutions in cooperation with Parametric Solutions, a U.S.-based gas turbine components engineering firm.

The achievement is especially remarkable considering that due to its nearly closed-loop process, the Allam cycle relies on a delicate balance of heating, cooling, compression, and venting. “Every aspect of the compressor-turbine train—from aerodynamics and process control to lube oil and seal support systems—have to be carefully considered to prevent damaging or hazardous conditions,” a spokesperson told POWER. Efficiency is also key. The main strengths of the direct sCO2 cycle are rooted in its inherent ability to capture carbon dioxide at high pressures—between 30 bar and 300 bar—which are not typical of a CO2 storage system. This requires compact turbomachinery and micro-channel heat exchanger designs that can perform the large thermal recuperation it needs.

According to Toshiba’s engineers, the solution combined the company’s gas turbine and steam turbine technology. “Regarding gas turbines, Toshiba has technologies for air-cooled nozzles and blades and, also, combustion in the air with a pressure of around 2 MPa [megapascal] and a temperature up to 1,500C. Regarding steam turbines, Toshiba has developed and commercialized USC [ultrasupercritical] steam turbines in [the 1990s], and are now developing advanced USC (A-USC ) steam turbines. Their conditions are around 24 MPa and 600C for USC and around 31 MPa and 700C for A-USC,” it said.

First, the engineers applied a double-shelled structure for the turbine and combustor—such as is common for USC steam turbines. It also leveraged its A-USC expertise to develop high-temperature materials for the casings and rotors in the sCO2 turbine. Engineering a durable thermal barrier coating (TBC), which they noted plays a crucial role in the sCO2 turbine and combustor’s cooling design (because temperature differences through the TBC in an sCO2 turbine is almost double that of conventional air-cooled gas turbines), posed as significant an engineering challenge. The company also engineered highly efficient cooling technologies, including cooling nozzles and blades, to manage the cycle’s extreme heat flux.

Finessing the technology has proven slower than expected. When Toshiba first announced it would develop the next thermal generation power system in June 2012, the company and partners Shaw Group, Exelon, and NET Power aimed to demonstrate the 25-MWe Allam cycle natural gas plant by mid-2014, planning a full-scale 250-MW commercial plant by 2017. However, while Toshiba wrapped up a six-month test to validate the combustor in August 2013 at a California facility (using a model that was a fifth of the one installed at NET Power), Toshiba first announced that it would supply the first-of-its-kind turbine in October 2014. The partners didn’t fully assemble and complete high-speed balancing tests for the rotor until August 2016. By October 2016, however, the turbine had been fully assembled and shipped to La Porte. 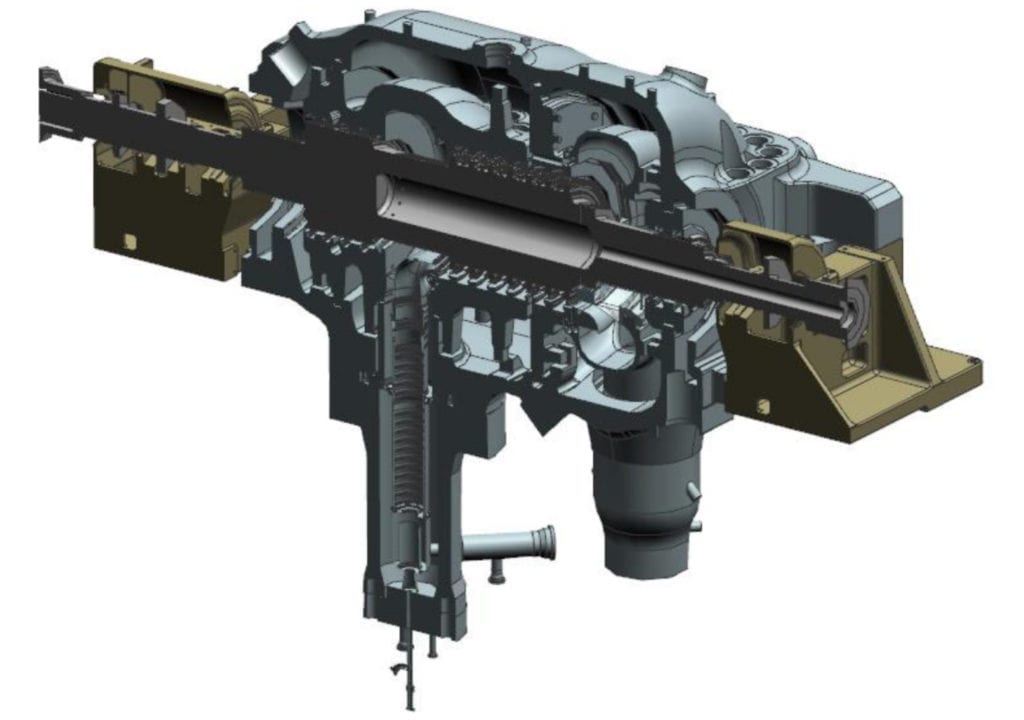 Yet, as Brown told POWER, despite work to refine the project’s nits, the overall process has been so smooth, “it was almost a mistake to call this a demonstration.” The company is so confident that while the full performance evaluation is underway at the 50-MWth natural gas demonstration, it has completed a pre-FEED study for a full 300-MWe commercial plant, and steps were underway to begin FEED and early development work.

At the same time, 8 Rivers Energy is pushing development of a 5-MW project to demonstrate a coal-fired Allam Cycle. The DOE has furnished the Energy and Environmental Research Center (EERC) at the University of North Dakota and 8 Rivers Capital with $44 million to help scope the project and select a site, conduct a FEED, and build and operate the plant. However, siting appears to have been delayed. A site was expected to be announced in October 2018. Contenders under consideration include the La Porte site, EERC’s facility, and Basin Electric’s Great Plains Synfuels Plant. The Lignite Energy Council also says the Allam cycle is part of its quest to find carbon dioxide solutions.

Yet, the Allam cycle’s coal potential may not be so straightforward, Leslie Sloss, a technical expert with the International Energy Agency Clean Coal Centre, noted in a recent paper. “For this technology to run with coal, all the clean-up steps that would generally be involved with a coal gasification project are required, and therefore it would be more complex. However, this is currently available and proven technology on existing gasification and [integrated gasification combined cycle] plants,” she said.

Among technical changes she noted are the combustor “may need to be redesigned to handle gasified coal.” Removal of impurities such as NOx and SO2 could be achieved as nitric and sulphuric acid, using well-demonstrated methods used in oxy-fuel combustion systems, she noted, however.