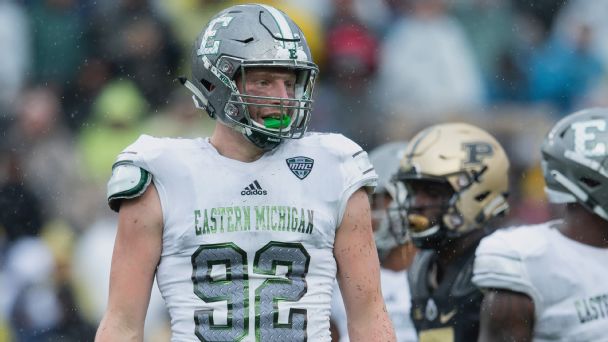 Stephen A. Smith goes off on the Jets after the team fired GM Mike Maccagnan and replaced him with Adam Gase on an interim basis. (0:38)

Start spreading the news … and there has been plenty of it in New York, New York.

In a wild and turbulent offseason, the local pro football teams — the Jets and Giants — have provided enough fodder for a month of back pages. The latest bombshell occurred Wednesday, when the Jets announced the firing of general manager Mike Maccagnan. The move came after weeks of speculation about a rift with first-year Jets coach Adam Gase.

This came only three weeks after the Giants rocked the NFL with the surprising and controversial selection of quarterback Daniel Jones at No. 6 overall in the 2019 NFL draft — and that wasn’t even the most shocking move of the Giants’ offseason. No, that happened in March, when they traded star wide receiver Odell Beckham Jr. to the Cleveland Browns — a decision that certainly didn’t boost general manager Dave Gettleman’s popularity in Gotham.

It’s not easy being a GM in New York.

Prior to the Beckham trade, the Jets dominated NFL free agency, doling out big bucks to sign star running back Le’Veon Bell … only to have Bell skip voluntary workouts. He also was a no-show for the Jets’ extravagant uniform-unveiling party.

Yes, the Jets and Giants have been making big headlines. Now if they could only, you know, win more games.

Jets: No doubt, it’s Bell, whom they hope will elevate second-year quarterback Sam Darnold into an elite player. The Jets signed Bell for less than many anticipated, but it still wasn’t cheap — four years, $52.5 million, including a $27 million guarantee. The former Pittsburgh Steelers star, who sat out last season in a contract dispute, is a multi-purpose weapon who will help bring explosiveness to the offense, one of the league’s worst in 2018. The big question: How will he respond after sitting out an entire season?

Giants: The Giants finally have their quarterback of the future after selecting Jones with the sixth pick in last month’s draft. This was imperative for the long-term health of the franchise. Now it’s just a matter of finding out whether they were right in their evaluation, otherwise it will be at least a decade-plus of bad football (dating to 2012) before they have a chance of turning it around.

Jets: For a change, they will go to training camp without a competition and/or controversy. The job belongs to Darnold, period. He is The Great Hope, the one player who can lift the Jets out of their eight-year, non-playoff funk. He has the physical tools and intangibles to be a special player, as he showed late last season. His biggest challenge will be consistency — specifically, cutting down on his turnovers. Look for Darnold to become more of a vocal leader in Year 2.

Giants: Eli Manning, 38, is around for at least one more season. The Giants still haven’t been able to cut that cord to Manning despite losing seasons and a decline in his performance. When it goes bad again (likely at some point this season), they will turn the fate of the franchise over to their future, Jones.

Jets: Right now, it’s a mess, considering Maccagnan’s ouster. He and Gase worked together for only four months, but they clashed on personnel issues. Philadelphia Eagles executive Joe Douglas, who has a close relationship with Gase and an extensive football background, is considered the front-runner for the GM position. The pair spent a season together in Chicago (2015) and have remained close. People who know both Gase and Douglas say they talk often on the phone.

Giants: Gettleman became the GM in the final week of 2017. He has since awkwardly torn the roster down — signing Beckham and trading him one year later. He also didn’t shop Landon Collins at the trade deadline, then let him walk in free agency. Even the rebuild has been clumsy — passing on a quarterback in last year’s QB-rich class and reaching for Jones this year after signing duds such as Jonathan Stewart and Patrick Omameh in his first crack at free agency. At least Gettleman claims to have cleared out the locker room, rebuilt the offensive line and created a winning culture, albeit with the results to be determined.

Jets: Evidently, Gase wields a lot of power because he just won a power struggle with Maccagnan, who had two years left on his contract. Gase has a lot to prove because, let’s not forget, he was dumped after a 23-25 run with the Miami Dolphins. So, no, it’s not like he’s walking in with a sterling reputation. He was hired, in large part, because of his background with quarterbacks. His job is to make Darnold a star. His relationship with defensive coordinator Gregg Williams bears watching; it could explode.

Giants: The jury is out on coach Pat Shurmur. His first season started poorly while his offense sputtered (27th in points scored during a 1-7 start). It improved as the season progressed (sixth in points scored over the final eight weeks). But Shurmur did butt heads with several players and couldn’t make the Beckham situation work. This is a big season for the Giants coach.

Jets: On paper, the Jets aren’t a bad team. They improved the roster and could contend for a playoff spot if Darnold continues to develop and Bell plays like the Bell of 2017. The defense is loaded with former first-round picks, and it will get a daily kick in the rear from its fiery coach, Williams. If everything clicks, and everybody gets along, they will make a serious run for a playoff spot.

Giants: The Giants compete for the playoffs this season behind star running back Saquon Barkley and an improved offensive line. This gives Jones a year to watch and learn behind Manning. They then build on that progress with Jones taking over next season and pushing the Giants into serious contender status.

Jets: It could get ugly. The coach/front-office dysfunction, coupled with the potentially volatile Gase-Williams dynamic, could blow up the entire season. Darnold has plenty of potential, but his offensive line is suspect and they still don’t have a No. 1 receiver. If Darnold has a sophomore slump — oh, boy, it could fall apart quickly. The Jets are a win-now team, having spent an unprecedented amount of money in free agency, but they could succumb to the weight of expectations.

Giants: Manning flops even with an improved offensive line. The Giants throw Jones into the fire and he proves to be a bust, this year and beyond. They try to make it work with Jones before realizing several years down the line that he’s not the answer. Now what? They have to try again for a quarterback after a decade of being a doormat.