The future of humanity lies beyond Earth, according to the two most prominent billionaires in the commercial space industry.

Last week, Blue Origin CEO Jeff Bezos laid out a vision of colossal orbital settlements that could house trillions of civilians, leaving Earth “zoned” as a residential planet. Elon Musk, CEO of SpaceX, believes our future awaits in Martian cities that can support millions of settlers, ensuring that our species has a “collective life insurance policy” should Earth become uninhabitable.

Earth is destined to be swallowed by the Sun in a few billion years—and human activity may make it inhospitable well before that—so our species will need to migrate into the universe to survive over the long term. But there’s a question that is rarely asked in these star-eyed presentations about speculative space utopias: What are humans without Earth?

Aniara, a science fiction film from VICE Studios that hits theaters Friday, simmers on the existential possibilities of this question. Adapted from a 1956 epic poem by Swedish Nobel laureate Harry Martinson, the movie follows the journey of the Aniara spacecraft as it carries refugees from a dying Earth to their new lives on Mars.

When the ship is knocked off course, the crew and passengers must come to terms with a grim fate as aimless cosmic wanderers for whom Earth is only a bittersweet recollection.

As the view from the space-liner grows darker, passengers become dependant on Mima, a sentient artificial intelligence system that can simulate memories of a pristine Earth. Mima guides people into reveries of bygone comforts, like the taste of freshly plucked berries and the sight of birds flying in open skies.

Pella Kågerman and Hugo Lilja, who co-directed Aniara, took pains to make sure these Mima scenes offered a visceral earthly escape— for both the characters and the audience—from the sterile cruise-ship environment of the spacecraft.

“With the landscape images, I remember that we were afraid of coming back with kitsch, something looking like a tampon commercial from the 90s,” Kågerman told Motherboard.

To shoot scenes that felt immersive, the directors drew inspiration from the opening sequence of Andrei Tarkovsky’s Solaris, which lingers over reeds undulating in the currents of a stream. They also used Hasselblad lenses, a camera brand with a storied spaceflight history.

“Hasselblad was the first camera in space,” Lilja told Motherboard. “The Moon landing pictures were taken with it, and those vintage lenses definitely add something to the feeling.”

The sense of relief Mima users experience once they slip into their memories is palpable in the film, as is their ennui when they resurface to their present. In this way, Aniara powerfully channels a concept called the “Earth-out-of-view phenomenon,” which is the speculative human experience of voyaging out of the sightline of Earth.

In contrast to the overview effect, which is a profound euphoric feeling some astronauts report upon seeing Earth from space, the Earth-out-of-view phenomenon suggests that humans may suffer psychological problems if they stray too far from the planet.

“It seems possible that it will induce some state of internal uncoupling from the Earth,” said authors Nick Kanas and Dietrich Manzey in their 2008 book Space Psychology and Psychiatry.

“Such a state might be associated with a broad range of individual maladaptive responses, including anxiety and depressive reactions, suicidal intention, or even psychotic symptoms such as hallucinations or delusions,” they speculated. “In addition, a partial or complete loss of commitment to the usual (Earth-bound) system of values and behavioural norms may occur.”

If you are curious how that may play out in science fiction, watch Aniara.

Even in the real world, though, scientists are developing tools to soothe future astronauts who might suffer from the most extreme version of homesickness: Earthsickness.

For instance, NASA funded a “telecommunications ecosystem” named ANSIBLE after a device described in Ursula Le Guin’s novels. Designed to break up the sensory and social monotony of a multi-year spaceflight, ANSIBLE enables users to enter virtual reality Earth environments and interact with avatars of their loved ones.

Led by Peggy Wu, who is now a principal scientist at United Technologies Research Center, the project was eventually tested out during the HI-SEAS mission in Hawaii, which isolated a small crew in a simulated space habitat for a full year. The HI-SEAS crew ended up using ANSIBLE to interact with each other as much as to keep in touch with friends and family outside the habitat, which came as a surprise to Wu and her colleagues.

“It gave them a completely different environment,” Wu told Motherboard in a phone call. “When they’re in there, they could choose to go to a different space and that environmental context allowed them to interact with each other [rather than] just looking at each other in the kitchen. It gave them more ways to get to know each other.”

The variety of natural habitats in ANSIBLE also gave the crew an opportunity to experience earthly landscapes, even if only in a virtual realm. For future astronauts traveling far from their home world, these escapes into a simulated wilderness may be a crucial coping mechanism.

“Our life in the city is really new compared to our whole evolution in the middle of lush forests and places like that,” Wu said. “I think we’ve probably evolved to really listen to those cues in nature and to feel peaceful in them. Buildings or artificial environments don’t have the same touchstone foundational point that we’ve evolved to live with.”

As dramatized in Aniara, it’s possible that not every deep space traveler will be consoled by simulated versions of Earth. For some, it might even amplify the Earth-out-of-view-phenomenon and make people feel more alienated. That’s why Wu thinks VR tools like ANSIBLE should be just one of many options available to astronauts in need of sensory and social stimulation.

“It’s like pictures of old friends,” she said. “Let’s say you’re looking at someone you can’t communicate with anymore: You might be grateful that you had that time or you might be sad that you don’t have anymore time.”

In this case, the “someone” is planet Earth. It’s easy to imagine why space travelers who may never return to our planet might be alternately gratified or depressed by virtual versions of it.

To that point, Aniara plays on another emerging concept called “solastalgia,” a neologism for the mental distress caused by environmental change and destruction. A portmanteau of “solace” and “nostalgia,” mental health professionals are increasingly recognizing this experience in patients who have witnessed their local wilderness areas destroyed by either natural disasters or human activity.

“Solastalgia is a new concept developed to give greater meaning and clarity to environmentally induced distress,” wrote the authors of the 2007 paper that coined the term. “As opposed to nostalgia—the melancholia or homesickness experienced by individuals when separated from a loved home—solastalgia is the distress that is produced by environmental change impacting on people while they are directly connected to their home environment.” 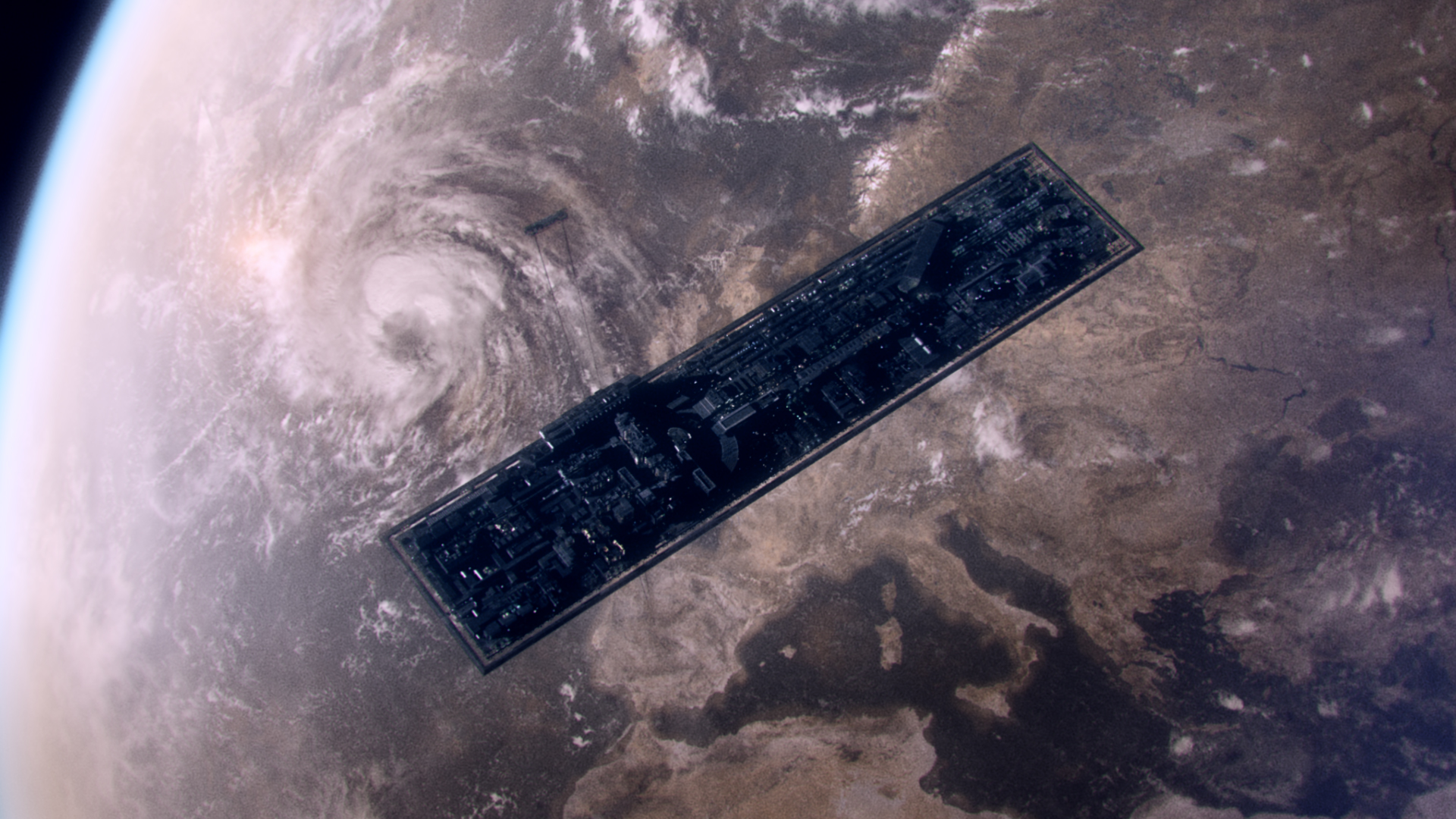 A scene from Aniara, a Magnet release. Image: Magnet Releasing

In other words, solastalgia is almost like a version of the Earth-out-of-view phenomenon that is occurring while we are still on Earth. This rising awareness of the human toll on Earth helps explain why dreams of Martian cities and gargantuan space colonies have been propelled into the mainstream lately. Such utopias present a soothing vision of plan B, in which moving civilization into space alleviates the anthropogenic pressures on the planet. Space is gained and Earth is not lost.

Read More: Bezos and Musk Are Shaping the Worldviews of Future Space Settlements

What is relatively unquestioned in this scenario is the assumption that humans can physically and psychologically handle being decoupled from our planet. Maybe it would be easy for populations to adapt to off-Earth environments, just as our ancestors pushed into new territories of the planet. Aniara, in contrast, presents a possible flipside, in which humans take for granted that our wellbeing is deeply rooted in our proximity to Earth.

As Lilja puts it: “The spacecraft we are onboard already is quite amazing, so why not make that one last longer?”