Authorities have initiated a far-reaching investigation into an unprecedented blackout that on June 16 hit a wide swath of South America—most of Argentina and Uruguay, and parts of Paraguay—affecting tens of millions of people.

The massive blackout—apagón—is thought to have originated in a disturbance that affected two high-voltage lines, Colonia Elia Y Mercedes and Colonia Elía-Belgrano, which run from the 3.1-GW Yacyretá hydroelectric dam near Argentina’s border with Paraguay, Brazil, and Uruguay, to the Salto Grande 1.9-GW hydroelectric dam further to the south on the border with Uruguay, and then to Belgrano, a Buenos Aires suburb. The disturbance—which authorities have since suggested was a “short circuit”—“activated the protections of power plants, which went out of operation and produced the blackout,” explained Enel Argentina subsidiary Edesur, a distribution company, at about 1:28 p.m., on Sunday.

The event began at dawn on Sunday morning—at 7:07 a.m local time, when demand was at 13 GW. In an instant, it cascaded through the national interconnected system (Sistema Argentino de Interconexión, SADI), cutting the lights for the entire country, with the exception of Tierra del Fuego in the south, which has an independent grid, as well as for most of Uruguay, and parts of Paraguay.

By about 2:45 p.m., Uruguyan company UTE reported 75% of service had been restored in the country, whose population is about three million, while Argentina’s President Mauricio Macri said 50% of the country’s 44 million people had power. At 5:40 p.m., Edesur said in a press release that it had returned service to 100% of its 450,000 customers in the metropolitan Buenos Aires concession area. By 6:30 p.m. UTE had reconnected 98.5% of electric customers, including in Montevideo. Paraguay’s capital Asuncion was not affected, but the National Energy Administration had restored power in smaller cities and rural areas by the afternoon, reportedly by redirecting power from the giant Itaipu hydroelectric plant.

In the episode’s early hours, some media reported that the blackout had affected parts of northern Chile and Southern Brazil, but officials issued statements refuting those claims. Chile’s grid operator on Sunday morning said its grid was “operating as normal,” and a spokesman for Brazil’s grid operator confirmed that the interruption had not affected the country.

The scope of the blackout has alarmed authorities in the region. In Uruguay, at a press conference Sunday afternoon, Minister of Industry, Energy, and Minerals Guillermo Moncecchi blamed the outages on a “massive failure in Argentina, which caused the whole system to fail.” UTE President Gonzalo Casaravilla noted the Uruguayan system is more than 10 times smaller than the Argentine system, and Uruguay is a “small sector of that interconnected system,” he said. He added: “We have been interconnected with Argentina for 40 years and no one remembers that this has happened before.”

In Argentina, President Macri—who once said constant blackouts symbolized the failure of the previous government’s energy policy—revealed that authorities had launched an investigation into its cause. More details will emerge as Argentina’s wholesale energy market administrator Compania Administradora del Mercado Mayorista Electrico (CAMMESA) issues its about the incident within 11 days.

Argentina recently upgraded the SADI with 5,500 kilometers (km) of high-voltage lines to connect 11 provinces, which were isolated before 2003, officials noted. Argentina’s Secretary of Energy Gustavo Lopetegui told reporters on Sunday that if protective systems failed to deploy, “We have to know why it happened.”

Meanwhile, Carlos Garcia Pereira, head of Transener, Argentina’s largest power-transmission operator, told reporters that cyberattacks “can’t be ruled out,” but he stressed it wasn’t a primary investigative hypothesis. The cascading failure could have also stemmed from a “technical issue,” or humidity, he noted.

Since the episode, Argentina has expanded its investigation, calling on its entire power sector—including more than 350 generators and 80 distributors—to provide more data about their operations.

Authorities initially said a lack of capacity wasn’t an issue. As of December 2017, Argentina had installed 36.5 GW—a 7.5% increase compared to numbers at the end of 2016. About 62.8% is thermal generation, about 28.6% of which is from natural gas, while 30.4% is from hydropower, 4.8% from nuclear, and 2% from renewables—from small amounts of geothermal, wind, and solar generation. Solar and wind energy are growing, with the government recently accepting tenders for 147 projects totaling 4,466 MW. The country is also exploring building a new nuclear plant at Atucha with Russian or Chinese technology.

But the country’s grid hasn’t kept up with expanding its transmission capacity. Since the country restructured and privatized its power sector in the 1990s, the 500-kV transmission grid has been dominantly operated by Transener under a 95-year concession. The national grid, SADI, has a total 34,292 km in length. About 14,191 km are 500-kV, and 19,532 km are distribution lines. And, as Enel Américas CEO Maurizio Bezzeccheri noted in a 2018 analyst update, “Most of the corridors are near the limit of their capacity in the moments of greater demand.”

Argentina’s government, too, concedes that spare capacity that existed before the 2016 and 2017 renewable energy and thermal energy auctions has already “been taken.” The government says it is working to resolve the lack of transmission capacity, mainly because Argentina expects to add between 14 GW and 18 GW of non-conventional renewables through 2030, which could raise the share of nonconventional to 25% by 2030.

As notable is that Argentina’s grid exchanges power through key interconnections with Brazil, Paraguay, Uruguay, and Chile—countries whose renewables capacities are also surging. The Chilean line—AES Gener’s 345-kV InterAndes—was connected in 2015. The Uruguayan interconnection allows transport of 2 GW. The country also has high voltage DC (HVDC)  links with Brazil and Paraguay.

What Is Known (and Unknown) About the Debacle

Just before the blackout struck the region, the Yacyretá hydroelectric dam contributed 1.7 GW and the Salto Grande dam, another 1.2 GW; both were operating as designed, and water levels on the Paraná and Uruguay rivers were reportedly high. Another 1 GW was being imported from Brazil through the Garabi HVDC link. Plants located in the Campana-San Lorenzo corridor supplied another 1.7 GW that morning, which means a total 5.6 GW was being sent down from the northeast to the center of the country. 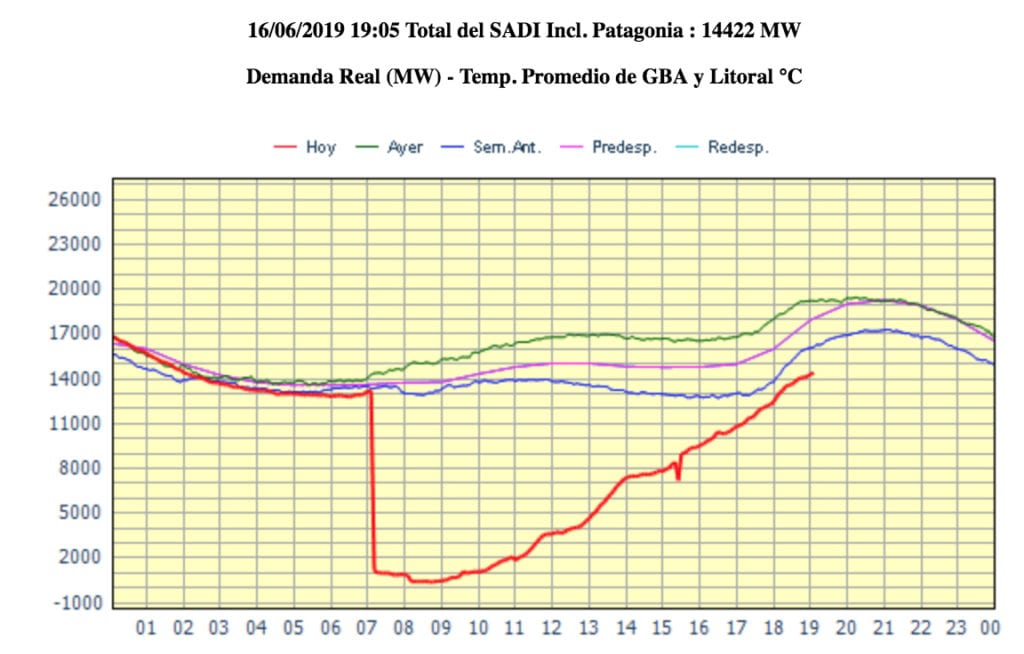 This graph from CAMMESA, published by IEEE Spectrum, shows how demand plunged on June 16 following a disruption to Argentina’s national grid at dawn. The green shows power from the day before. Source: CAMMESA/IEEE Spectrum

Both Transener and CAMMESA said the two 500-kV lines—one from Mercedes to Colonia Elía, and the other from Colonia Elía to Belgrano—offered enough transmission capacity. A third 500-kV line running in parallel to the Belgrano line from Colonia Elía to Nueva Campana that should have ensured reliability was out of service, owing to maintenance of a high voltage transmission tower. As Argentine newspaper La Nacion reported, the tower had been at risk of collapse, owing to corrosion at the base. Work to replace the tower began on April 18.

CAMMESA suggested that a short circuit on the Colonia Elía-Belgrano line may have been the cause of failure. “This abnormally weakened the transmission network, possibly destabilizing the Yacyretá and Salto Grande power plants and their contributions were lost,” it said. However, the Associated Press on Wednesday reported that seconds before the failure on Colonia Elía-Belgrano line, an anomaly had also occurred on the Colonia Elia Y Mercedes line, but it was successfully isolated.

The trouble likely stemmed from a fault on a bypass installed on both lines to take advantage of cheap hydropower in the region, reported La Nacion. The disturbance possibly caused a variation of the system’s 50-Hz frequency, which prompted disconnection protections, it said, citing CAMMESA. (One of those mechanisms,  Automatic Disconnection of Generation [or DAG, its Spanish acronym], automatically disconnects generators in 200 milliseconds if it detects a problem, but it is unclear if DAG tripped the system.) It is speculated that disconnection of the northeastern generators appears to have left the system with a generation deficit, prompting under-frequency load shedding. 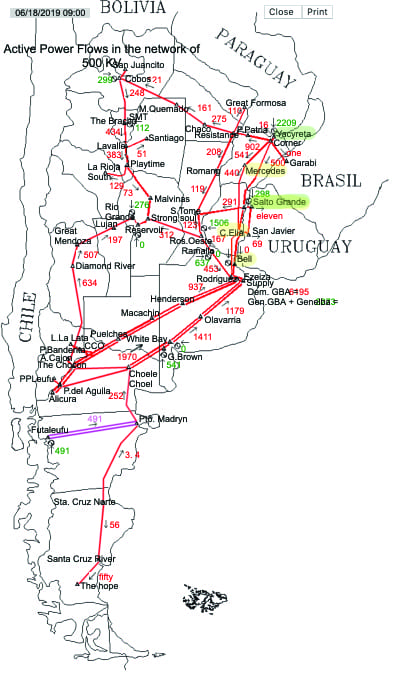 For now, CAMMESA and Transener have reportedly decided to source more expensive thermal power from Brazil to feed the grid rather than hydropower from the two plants. The measure is “exaggerated security” as the investigation continues, because authorities are sure that the fault originated in the area, CAMMESA told La Nacion.

The episode has also triggered alarm about grid reliability—and not just in Argentina.

In its aftermath, media outlets recalled a massive power blackout that shut the lights for tens of millions of people in southern Brazil in 2009, when the Itaipu hydroelectric plant failed at about 10:15 p.m. local time. In March, they noted, Venezuela suffered two major blackouts. The first, early that month, plunged the entire country into darkness, while the second cut power to more than half the country. President Nicolás Maduro blamed the first crippling blackout on foreign saboteurs and terrorists, but industry observers say it was caused by a bush fire that debilitated a key section of the national grid.

And in the U.S., the event has been widely cited in arguments that call for increased grid reliability. U.S. Environmental Protection Agency Administrator Andrew Wheeler on June 19 pointed to the event as he outlined why the nation needs coal generation as rationale for repealing the Obama administration’s Clean Power Plan. “The importance of reliable and affordable energy cannot be understated,” he said. “Take this away and our nation’s health and safety are at risk.”

But as Derek HasBrouck, an energy and utility expert at PA Consulting, told POWER, an outage of such a magnitude is unlikely to happen in the U.S. “The conclusion to draw is that the high-voltage transmission system across the four or five South American countries needs to put in place many of the types of improvements the U.S. made after the 2003 Northeast blackout,” he said. “The North American Electric Reliability Corporation Critical Infrastructure Protection operating standards took a very good, industry-led approach in the U.S. and added some additional detail, rigor, and compliance/enforcement tools to it to improve both the situational awareness of system operators and the robustness of the system’s design and maintenance.”

He predicted: “Given the sort of relay and control failures that seem to have occurred in Argentina, portions of these types of improvements are likely to be identified as needed changes.”

Industry experts meanwhile noted that as authorities investigate the exact cause of the debacle, theories about its cause continue to swirl.  But as Francois Laborie, general manager of technology firm Cognite North Americas, told POWER, “conspiracy theories”—specifically concerning a potential cyberattack—were unnecessary.

“While a cyber-attack is always possible, one should not underestimate the complexity of running such an interconnected, balanced system. Managing the aging infrastructure, power generation failure or imbalance in a trans-frontier truly interconnected grid is a very complex exercise,” he noted. “The growing electricity demands is putting a strain on these infrastructures globally, and without advanced real-time monitoring and balancing capabilities, it becomes harder and harder for these infrastructures to offer the reliability and resilience taken for granted in many parts of the world.”

Laborie noted this “is another space where big data, automation and advanced analytics have come to play a growing role in the background and we can expect their influence to continue to grow.”

Editor’s note (June 20): Corrects names of transmission lines where the disturbance was thought to have originated. This story will be updated as more details emerge.