“The world’s nuclear plants continue to perform excellently,” Agneta Rising, director general of the World Nuclear Association, wrote in the preface to the recently released World Nuclear Performance Report 2019. Yet, if the nuclear industry is to reach its “Harmony” goal, which is for nuclear generation to supply 25% of the world’s electricity before 2050, it must accelerate capacity additions significantly in the future.

In the report, the World Nuclear Association said it expects more than 20 new nuclear reactors to be connected to the grid before the end of 2020. However, Rising wrote in her concluding remarks that meeting the Harmony goal would require the addition of at least 1,000 GW of new nuclear capacity. To achieve that, new capacity added each year would need to grow from the current 10 GW to about 35 GW in the 2030–2050 period. 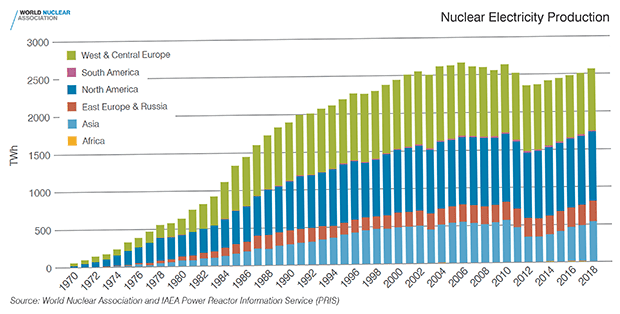 The report includes a status update through July 31, 2019, which showed that four new reactors were connected to the grid in the first seven months of 2019, while eight units were permanently shut down during the period. Only one new unit—Kursk II-2 in Russia—began construction.

The global average capacity factor of operating nuclear reactors, which is a percentage calculated by dividing the actual electricity generated by the maximum possible output over a period of time, was 79.8% in 2018. Although that was down from 81.1% in 2017, it was consistent with the high averages witnessed over the past two decades (Figure 2). The timing of refueling outages and maintenance upgrade periods affects year-to-year comparisons. 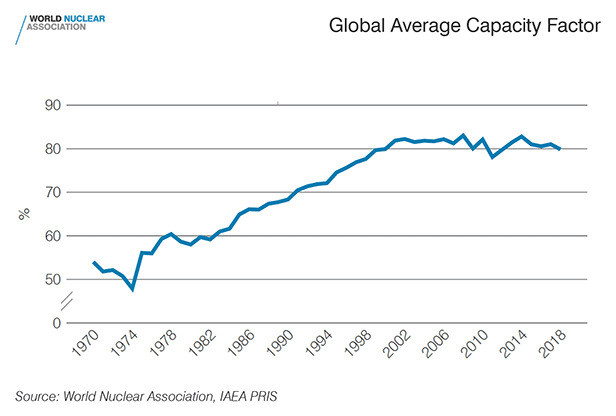 In 2018, the global average capacity factor was 79.8%, maintaining the high levels achieved over the last 20 years.

The report notes that there was no significant age-related trend observed in nuclear reactor performance (Figure 3). The mean capacity factor for reactors over the last five years shows little variation with age, it says. 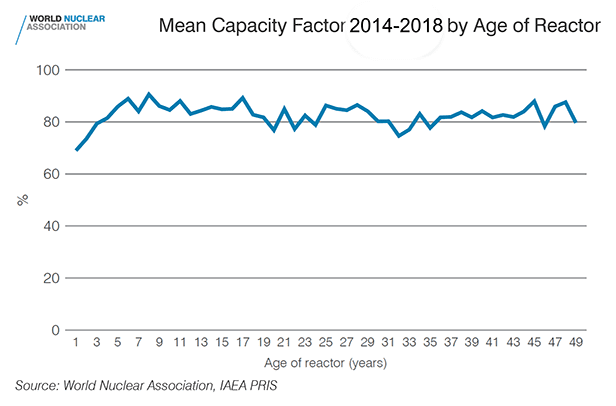 The mean capacity factor for reactors over the last five years shows no significant age-related variation.

Notably, five reactors will celebrate 50 years of operation in 2019. The units are Beznau 1 in Switzerland, Nine Mile Point 1 and R.E. Ginna in the U.S., and Tarapur 1 and 2 in India. The report says this is the first time the milestone has been achieved by any reactor worldwide.

“Over the last 18 months the call for action on climate change has become louder and more urgent,” Rising wrote.

But an interesting question is posed in the report: “Can nuclear generation be expanded fast enough to combat climate change?” It suggests the answer is yes.

During the rapid expansion of nuclear generation in France in the 1980s and 1990s, most reactors were built in six to seven years, the report says. In recent years, several nuclear reactors have been constructed in China in about five years. Although the global median construction time in 2018 was longer—about eight and a half years—that was primarily due to a high proportion of first-of-a-kind reactors.

“A commitment to a substantial expansion of nuclear generation would deliver the benefits of series construction, including faster and lower cost construction,” Rising said.

The World Nuclear Association isn’t the only group that thinks more focus should be placed on expanding nuclear power. The International Energy Agency (IEA) released a report in May titled Nuclear Power in a Clean Energy System. In it, Fatih Birol, executive director of the IEA, wrote, “Without action to provide more support for nuclear power, global efforts to transition to a cleaner energy system will become drastically harder and more costly.”

Rising concluded, “If we are to be serious about climate change we should also be serious about the solutions. Transitioning to a low-carbon economy that meets the energy needs of the global community presents a daunting task. But it is a challenge that must be met, and one that can only be met by using the full potential of nuclear energy.”