GEH on Oct. 3 said it had signed an agreement with Fermi Energia OÜ, an Estonia-based company established by nuclear industry professionals to support the development of SMRs. The two companies will collaborate on potential deployment applications for GEH’s BWRX-300 SMR design. GEH said the companies will examine the economic feasibility of constructing a BWRX-300 in Estonia, review siting requirements, and assess nuclear regulatory requirements.

The BWRX-300 is a 300-MWe water-cooled, natural circulation SMR with passive safety systems. According to GEH, the BWRX-300 leverages the design and licensing basis of the U.S. Nuclear Regulatory Commission (NRC)-certified Economic Simplified Boiling Water Reactor (ESBWR), which is a 1,520-MWe Generation III+ unit (Figure 1). The BWRX-300 is the tenth evolution of GE’s first BWR design, and the company says it represents the simplest, yet most innovative, BWR design since GE began commercializing nuclear reactors in 1955. By leveraging the ESBWR design certification, utilizing licensed and proven fuel, incorporating proven components and supply chains, and implementing simplification innovations, GEH believes that the BWRX-300 can become cost-competitive with power generation from combined cycle gas and renewable sources.

“Our BWRX-300 small modular reactor is breakthrough technology that is designed to be cost competitive with gas and renewables and we think it represents an ideal solution for Estonia’s carbon-free energy needs,” Jon Ball, executive vice president of Nuclear Plant Projects for GEH, said in a press release.

“Estonia needs to consider new generation small nuclear technology to maintain energy independence and achieve climate neutrality,” said Kalev Kallemets, CEO of Fermi Energia. “Boiling water reactors have been proven in the Nordics to be safe, economic and reliable providers of carbon-free energy for decades and the design of the BWRX-300 makes it investible and highly competitive technology.”

On Sept. 26, Portland, Oregon-based NuScale Power announced it had signed a memorandum of understanding with ČEZ Group, a Czech utility conglomerate, to explore applications for NuScale’s SMR as a long-term energy solution in the Czech Republic. The agreement calls for a sharing of nuclear and technical expertise between the two companies as they examine applications for NuScale’s SMR (Figure 2). Specifically, NuScale and ČEZ will exchange information relating to nuclear supply chain development, construction, and operation and maintenance. 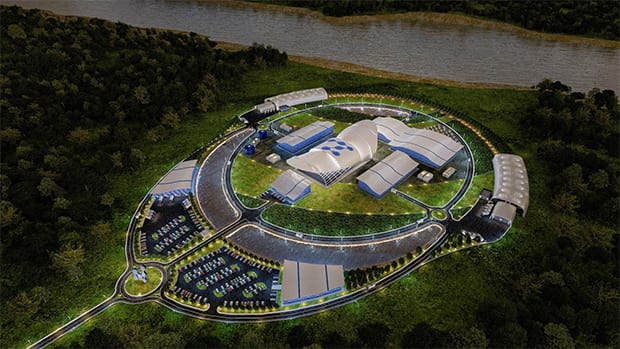 “I am confident that the simplified design and resulting lower operating costs of NuScale’s SMR make us the ideal technology to help ČEZ meet a growing demand for cost-effective, carbon free energy,” NuScale Chairman and CEO John Hopkins said in a press release. “This agreement highlights the rapidly growing international interest in our technology, and will give us the opportunity to examine how best to deploy the NuScale SMR in Europe in the coming years.”

Nuclear power currently generates about one-third of all electricity in the Czech Republic. ČEZ—one of the largest utility companies in Europe—currently operates two nuclear power plants in the country.

“We have a long-term orientation on new solutions and technologies. Our technical-engineering company UJV Rez is already researching small modular reactors, which represent an important future alternative that cannot be ignored. This partnership with NuScale is a next logical step in our efforts,” said Daniel Beneš, Chairman and CEO of ČEZ.

Unlike GEH’s SMR, NuScale utilizes pressurized water reactor technology. The design features a fully factory-fabricated NuScale Power Module capable of generating 60 MW of electricity. The company says its design is scalable, with power plants housing up to 12 individual power modules. NuScale’s technology is the only SMR to undergo design certification review by the NRC. The NRC completed phases 2 and 3 of its review in July and is scheduled to complete its review of NuScale’s design in September 2020.

In the U.S., NuScale is working with Utah Associated Municipal Power Systems (UAMPS) on a carbon-free power project. In February 2016, the U.S. Department of Energy issued a site use permit, which allows UAMPS to identify and characterize potential locations, license, and construct a NuScale Power Plant at the Idaho National Laboratory. Current projections suggest the first NuScale Power Module could achieve commercial operation at the site by 2026.