I wrote a about the extraordinary positive reception of the new generation of compact EVs from brands like VW and Opel at the Frankfurt Motor Show IAA in September, and a of the road trip itself in my Model 3 where I had an imaginary conversation with my car based on the factual driving experience of more than 1000 miles and 10 charge stops. While putting that adventure behind me, and witnessing the cold and dark coming of the fall, something has kept nagging in the back of my head. Those grey Audis at the show. The color of ducklings. 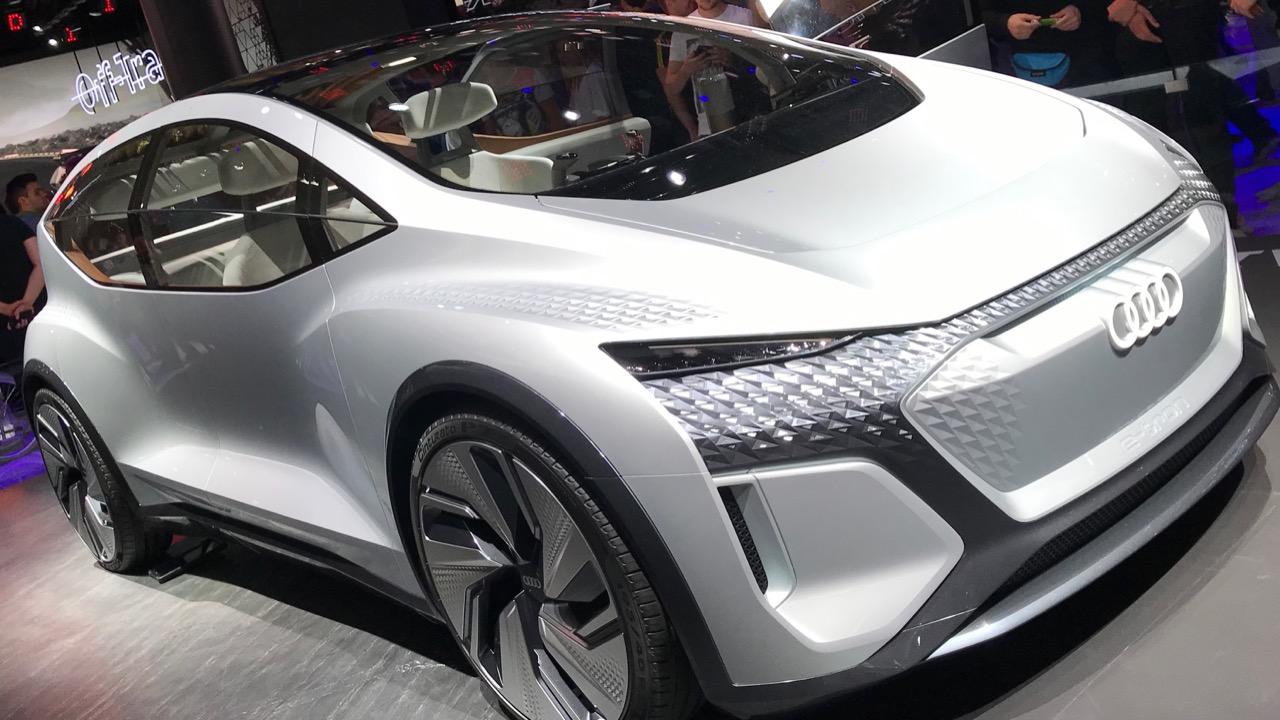 I was browsing through my photos from IAA 2019 and when I looked at those grey cars from Audi I kind of got nostalgic about that particular brand. I owned a 2001 for more than 10 years and since it was such a futuristic car back in the day, I came to remember hoping so much that it would iterate into an electric next generation. It was destined for that.

The Audi A2 had the advanced aluminum Audi Space Frame design with double layered floor which made it suspiciously close to the idea of fitting batteries the same way Tesla eventually did with the Model S. It was super light, super strong, and super comfortable. A drag coefficient of 0.25 was impressive, and the wheels were made of super light magnesium.

The transmission was a conventional 5-speed gearbox with automatic electric actuated gear shift and clutch. The electronic control of the engine and transmission was years ahead of its time. It worked extremely well and it’s what you see in many new cars today, although modern models with this technique are still hard pressed to work as smoothly as the software engineers at Audi managed in such a compact design, without cheating with heavy double-clutch systems and such.

This system was shared with the which with a less premium build and smaller size, and thus much lower price, became quite a bit more popular than the A2. The term “3L” refers to these models being able to drive 100 km on 3 liters of diesel fuel (78 mpg), and it did actually do that. My personal best was a summer holiday in Sweden in warm weather on mainly 60 mph long flat stretches. I drove 700 miles fully packed with an average of 95 mpg!

It seemed to me that Audi (under the VAG Volkswagen Aktiengesellschaft) with the extravagant technical achievement of the A2 had made a profound statement of peak efficiency of the internal combustion engine that it seemed impossible to surpass, and the next big surprise from this respected automobile giant would be an electric long-range model. I was certain I would be trading in my diesel A2 with an electric A2 soon enough.

Was I naive? Not at all. At the Frankfurt Motor Show in 2011, Audi showed off the A2 electric concept (which looks very much like the A1 models of today), preceding an expected new A2 production model. It had a lithium-ion battery placed in the floor holding 24 kWh of usable energy. With a bit of luck Audi would not settle with that capacity seeing what Tesla was up to, so I was hoping for a couple of options topping at maybe just short of 40 kWh. The double floor would certainly have made this a realistic capacity considering the Tesla Model S had 85 kWh crammed in there already by 2012.

I figured such a super lightweight electric A2 with a 40 kWh battery would match the range of my diesel A2, because that was actually fitted with a ridiculously small 20 liter (5 gallon) tank that gave me an average range of 500 km (310 miles). Funny, that’s exactly the range of my Model 3.

The enthusiasm of Audi materialized in the A2 was unambiguous, so there was every reason to believe the whole VAG giant was working behind the scenes to show the world the future of mobility that would replace the now peak performance internal combustion technology. To make this clear to all, they worked on the E-Tron supercar as a showcase on electric motor performance and battery capacity. Turns out the priority of VAG was on the fossil software instead of electric hardware.

Anyway, I waited. I held on to my beloved A2. I waited some more. Nothing happened. I eventually sold my A2 (2 weeks before exploded) and leased my first Nissan Leaf in 2015, and a year later I put down a reservation for the Tesla Model 3. Given the shock to the whole automotive industry when hundreds of thousands of reservations were made for the Model 3, I was again convinced that would snap out of it. Nothing happened. Well, except for the numerous “” that were supposed to wipe out this annoying wannabe car startup and take over the world. Audi has a motto, Vorsprung durch technik (Lead by technology), and that’s exactly what I thought the company did when I drove around in my A2. In 2015 it was still futuristic in its design, though still kind of tiny and not sporty looking. It still felt like a new car, with no rattles, no wear and tear, and a roomy premium interior without any signs of more than 200,000 km (125,000 miles) of use. The engine was running perfect with no decrease in mileage whatsoever.

The fact of the matter is that Audi should, and could, have built the equivalent of a Tesla Model 3, or rather, an imaginary Tesla Model 2, about 10 years ago. The whole A2 idea was a stroke of genius. Vorsprung indeed. The A2 was an equally exceptional and controversial endeavor almost 2 decades ago, packed with very sophisticated technology ready to take on the new millennium. No, it did not sell in large numbers. It was simply too radical. But when people gloat about their compact diesel today having 80 mpg mileage, I shrug and say: Well, that’s not really news.

And here we are. In 2019. We now have the E-Tron SUV with a price tag of 3 times that of the 2001 A2, struggling to get decent sales numbers. Well, it’s big, heavy, and expensive, so one wouldn’t expect it to beat the Tesla Model X in sales overnight, but maybe it will eventually. So, now that the high end model is rolling, bring on the mainstream compacts! There’s the VW ID.3! There’s the Opel Corsa-e! There’s the new Renault Zoe! There’s the Peugeot e-208! There’s the new BMW i1! And there’s even the Chevy Bolt in the USA. But where’s the Audi?

At this year’s IAA the stood there in all their glory. The AI:Trail, the AI:Con, the AI:Race, and the AI:Me being yet another attempt of an A2 successor. I was all in on the A2 form factor back then, and I see the resemblance to the AI:Me, but it’s too late for me now. Yes, my Tesla Model 3 was more expensive than an electric A2 would have been, or rather, than the production AI:Me may be if it ever reaches production. And where’s the electric Audi A3 and A4? Oh, right, the customers don’t want them. Yet. Wrong. I saw people crawling all over the VW ID.3, and a class of mid-size premium models from Audi would most certainly sell too.

Maybe Tesla will crash and burn when Big Auto gets their act together? Some people are very certain of it. Here’s what professor of marketing at the New York University Stern School of Business, Scott Galloway states in a :

“…those that could lose more than 80 percent of their value or disappear: Tesla. Dear Twitter trolls: yes … I’m an idiot, I can’t do, so I teach, and I don’t understand genius. It’s a tech/energy play. I get it… Save your breath. Yes, he is a genius, Tesla has changed the world for the better (I believe this). And … Tesla doesn’t have the scale to compete in a well-run, low-margin business — auto.”

Hm… Really? Doesn’t have the scale? What’s the Shanghai Gigafactory for then? Built in no time I might add. Well-run, low-margin business? How is low-margin good when sales drop?! Oh yes, the dear old trustworthy Big Auto. ? Many an article is now being written about how being big, and old, is no guarantee that you won’t die. But what do I know? I’m just interested in cool cars. I just want to drive cars, or be driven by cars, either way. And if an auto manufacturer aims at producing products that let me do that without destroying the planet, or too much that is, I tend to give them the benefit of the doubt, and acquire their product — like I did with the Audi A2 and the Tesla Model 3.

I don’t mean to talk badly about Audi. It has a great history. Its cars are rock solid and stylish. I owned the A2 and loved it. My wife still misses it. My son has a 1992 Audi 80 with the gem of the 5-cylinder 2.3 engine that’s so smooth it almost feels like an electric (well, not quite, but I don’t want to hurt his feelings, however, the cabin noise of his old Audi is actually the same as my Model 3 at highway speeds, which says a lot!)

So, Audi, what the heck? What are you doing? I would have bought the electric A2, and I would have loved it. No doubt! Owners of the BMW 3-series might have loved a proper electric successor just as much, and though they have had the choice of the funky i3 since 2013, many find it . Owners of mid-size Mercedes-Benz models have probable gazed at the B-class electric until they realized it was a total compliance car without fast charging. The market need these midsize premium cars for people to strive for, while they buy huge numbers of sub-premium brands.

The low-margin business of selling hardware may be marginalized if a high-margin business of selling miles of off high tech semi- or fully-automatic cars catches on. That’s another game all together. Some companies will make big money on this, Tesla included. The Audi A2 was proof that the big guys can play this game of putting cutting edge technology in the hands of the consumer, but the fact that an electric mainstream long range A2, or equivalent, is not yet out there in the hundreds of thousands means that some of these big guys just might lose the game to the cheeky newcomers.

For the record: No, the newcomer Elon Musk did not plan to screw Big Auto over, he invited them to . All photos by the author.

Feel free to use my referral code (or anybody else’s) when you buy a Tesla to get some free Supercharger miles:

Jesper Berggreen Jesper had his perspective on the world expanded vastly after having attended primary school in rural Africa in the early 1980s. And while educated a computer programmer and laboratory technician, working with computers and lab-robots at the institute of forensic medicine in Aarhus, Denmark, he never forgets what life is like having nothing. Thus it became obvious for him that technological advancement is necessary for the prosperity of all humankind, sharing this one vessel we call planet earth. However, technology has to be smart, clean, sustainable, widely accessible, and democratic in order to change the world for the better. Writing about clean energy, electric transportation, energy poverty, and related issues, he gets the message through to anyone who wants to know better. Jesper is founder of Lifelike.dk.