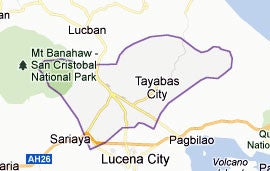 The suspect was arrested after operative acting as a bettor placed his bets.

Seized from the suspect were STL bet collection forms, paraphernalia, and money bets amounting to P945.

Police said the suspect was not wearing the required uniform for a legitimate STL bet collector.

He also failed to produce legitimate identification cards issued by Pirouette Gaming Corp., the licensed STL operator in the province, which indicates he was engaged in “bookies” operation.