This spring, VICE partnered with Fotografiska New York to present New Visions, an exhibition showcasing 14 emerging photographers from around the world who are changing the way we see. To highlight the work beyond the museum, we asked 14 of our favorite, fresh voices in culture to respond to the photos in writing. Here, music and art writer Wilbert L Cooper profiles photographer Luis Alberto Rodriguez. Read more from the New Visions series here, and learn how to visit the show at Fotografiska New York here.

In the summer of 2018, New York City-born and Berlin-based artist Luis Alberto Rodriguez found himself on the sidelines of a Crossabeg-Ballymurn hurling team practice in the picturesque little port town of Wexford, Ireland. As he watched, fair-skinned athletes sprinted up and down the field, playing an archaic Gaelic game that requires you to use a wooden stick to swat a small leather ball through goal posts before your opponent bludgeons you into the dirt.

Rodriguez had come to the scrimmage to make an unlikely request of the sweaty, roughhousing athletes: To pose for some pictures. “I didn’t know any of these people,” he recalled to me over the phone from Berlin. “I was scared shitless.”

Wexford is an unconventional place to be for a queer, Afro-Latino artist like Rodriguez. Unlike the Washington Heights neighborhood in Manhattan where the photographer came of age, it’s not what you'd describe as a melting pot. The population is about 98 percent white, and the local culture is singularly steeped in the area’s Gaelic and viking history. 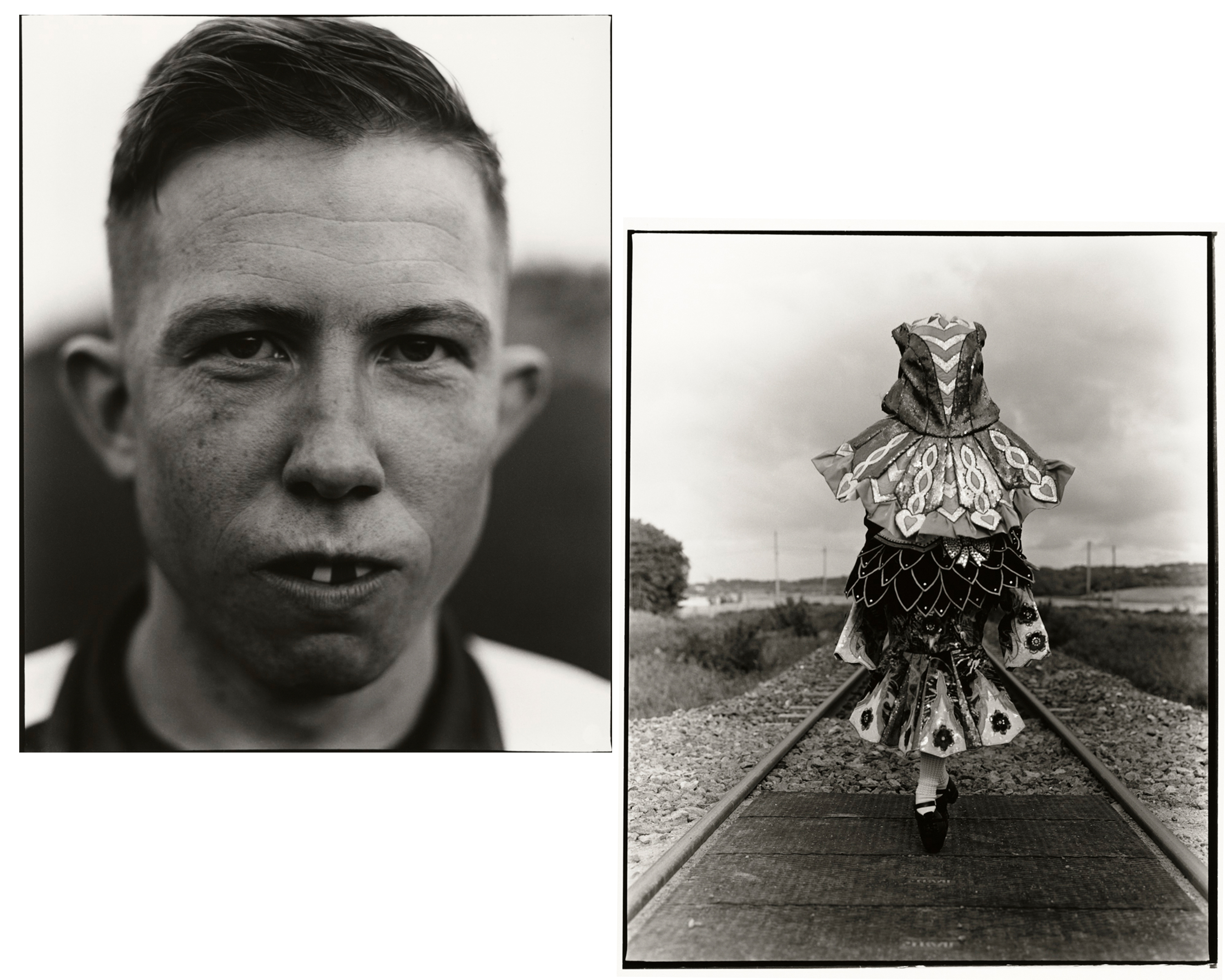 Rodriguez was called to Wexford for a Futures Photography residency hosted by the PhotoIreland Festival. His task was to make images that embodied Irish cultural heritage. In addition to hurlers, he sought out other locals who he felt were rooted in time-honored traditions, such as farmers whose families had worked the lands of Wexford for more than 300 years, and the modern practitioners of traditional Irish step-dancing who still don the full regalia when they perform in pubs.

The intimate images he created are tense with seemingly disparate qualities of grace and ruggedness. To Rodriguez, these natures “seem to be polar opposites, but in their conflicting relationship lies a wealth of beauty and inspiration.” There is an agelessness to the photographs, too. For Rodriguez, this was intentional. “I wanted the work to feel lost in time but with contemporary bodies.”

The exacting way that Rodriguez positions the bodies of his subjects drives much of their power and is surely informed by his 14 years spent as a professional dancer, learning how to study "the power of gestures” and “observe the bodies of others.” One such example is “Niamh and Ax,” a black and white image that features a field-worker clutching an axe. The chopper is not raised in the air as one might expect. Instead, the worker is bent over backwards, with both their feet and their tool tethered to the Earth. 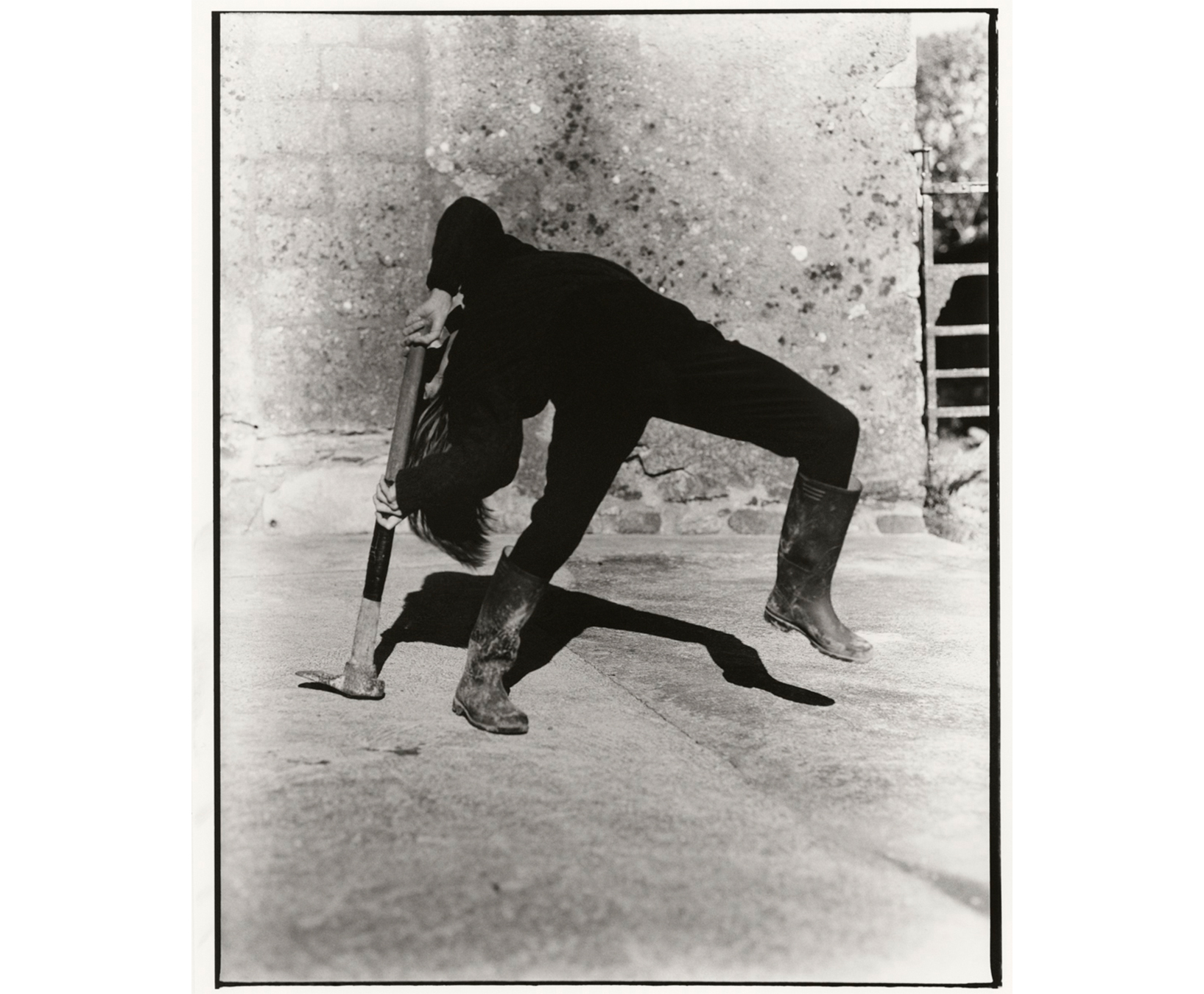 More than 60 of the photos that Rodriguez took during his time in Wexford have been collected in a new 113-page photo book printed by Loose Joints called People of the Mud. The title of the series is a reference to the viking origins of the name Wexford, which was Veisafjǫrðr, and translates to the “inlet of the mud flats.” For Rodriguez, that mixture of earth and water came to represent the ways he saw the people of Wexford interact with their traditions, because, as he told me, “mud is ever-present… and yet it is always taking new shapes based on the new imprint people leave behind.”

At first, it might be hard for some to square Rodriguez’s artistic interest in Wexford, considering that before the 39-year-old set foot in the town, his most arresting work was centered around Black and brown bodies. With his 2017 Spectacular Home series, which was shot in the Dominican Republic, the home-country of his parents, he channeled his Afro-Latino identity through dream-like images. Take “Yoelki,” his stirring photo of a shirtless boy’s chocolate skin peppered with multi-colored sweets and lollipops; or “Daniel in Veil,” the shot of a young Black man in sagging jeans and sneakers cloaked in a transparent shroud that sprawls out around him like a heavenly forcefield. These images manage to celebrate Blackness amid the environs of a Latino culture that has often erased or ignored its presence.

But as successful as these past projects were, Rodriguez recognized that photographing in Ireland had to be different. “There isn’t a lot of mixed culture in Wexford. So it would have just been disingenuous for me to go on some kind of cultural scavenger hunt,” he said. At the same time, he never retreated from his focus on the bodily gestures as a tool to emote and express, a throughline in all his photographic work. 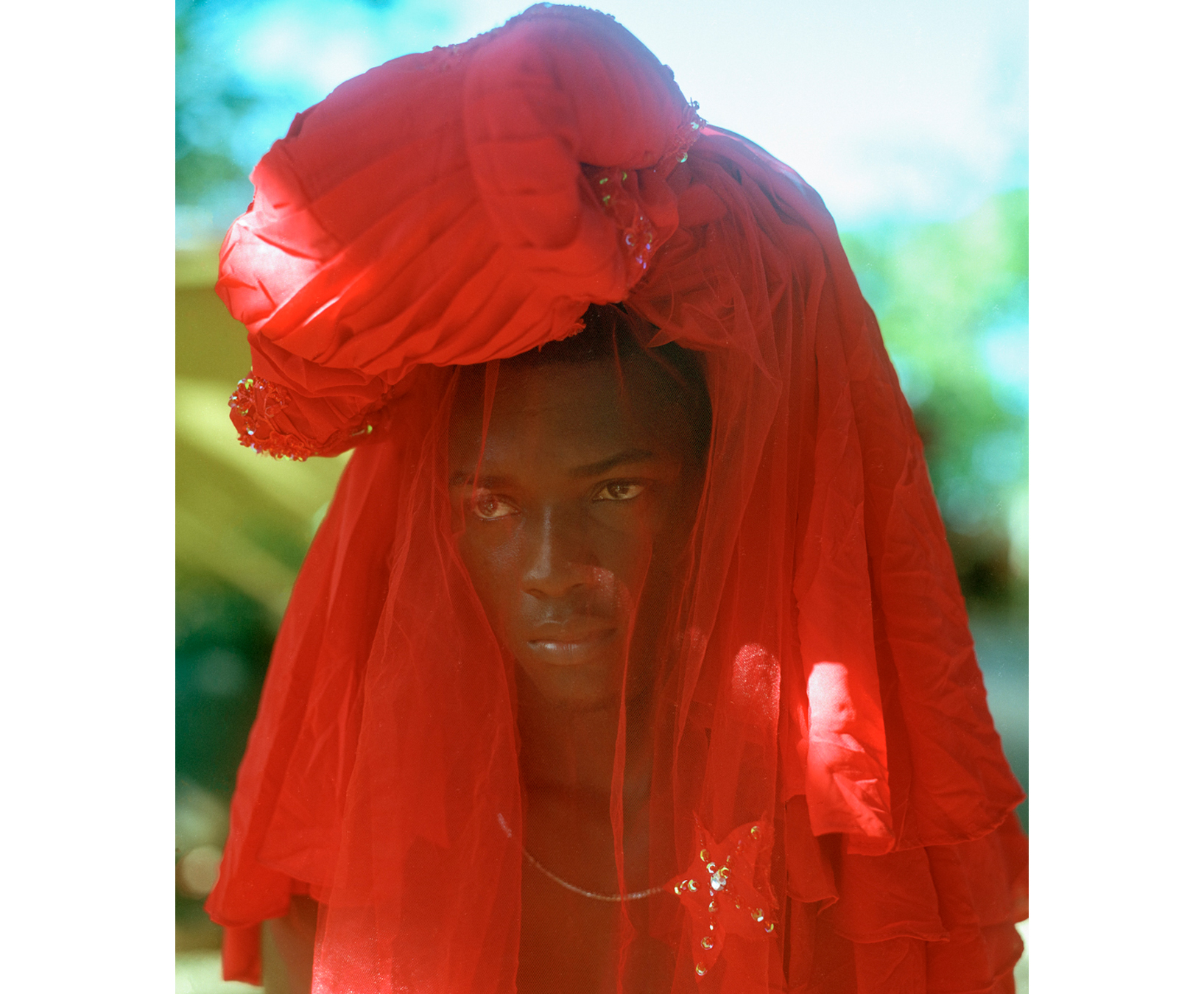 Photo by and courtesy of Luis Alberto Rodriguez from the series Spectacular Home, shot in the Dominican Republic.

Although Rodriguez’s immigrant parents were too busy working their restaurant and factory jobs to be invested in the fine arts, physical expression came organically to Rodriguez from a young age. “I was always moving,” he told me.

Growing up in Uptown Manhattan in the midst of both the crack epidemic and prevalent homophobia, dancing quickly revealed itself to be an escape hatch. “I was bullied and I kept to myself a lot,” he said. “From a very young age, I realized I had to get out. So art became about survival.”

After studying dance at the “Fame” High School for Performing Arts and the Juilliard School conservatory, Rodriguez decamped to Sweden, where he danced for the Cullberg Ballet, one of Europe’s most respected institutions. It was during this period of his life that he started thinking about photography. “Before I even had a camera, I would watch the dance performances of my colleagues in terms of moments I wanted to photograph. I would take my hand, almost as if I had binoculars, and be like ‘Click. Click. Click…’ I could see the action in frames.” 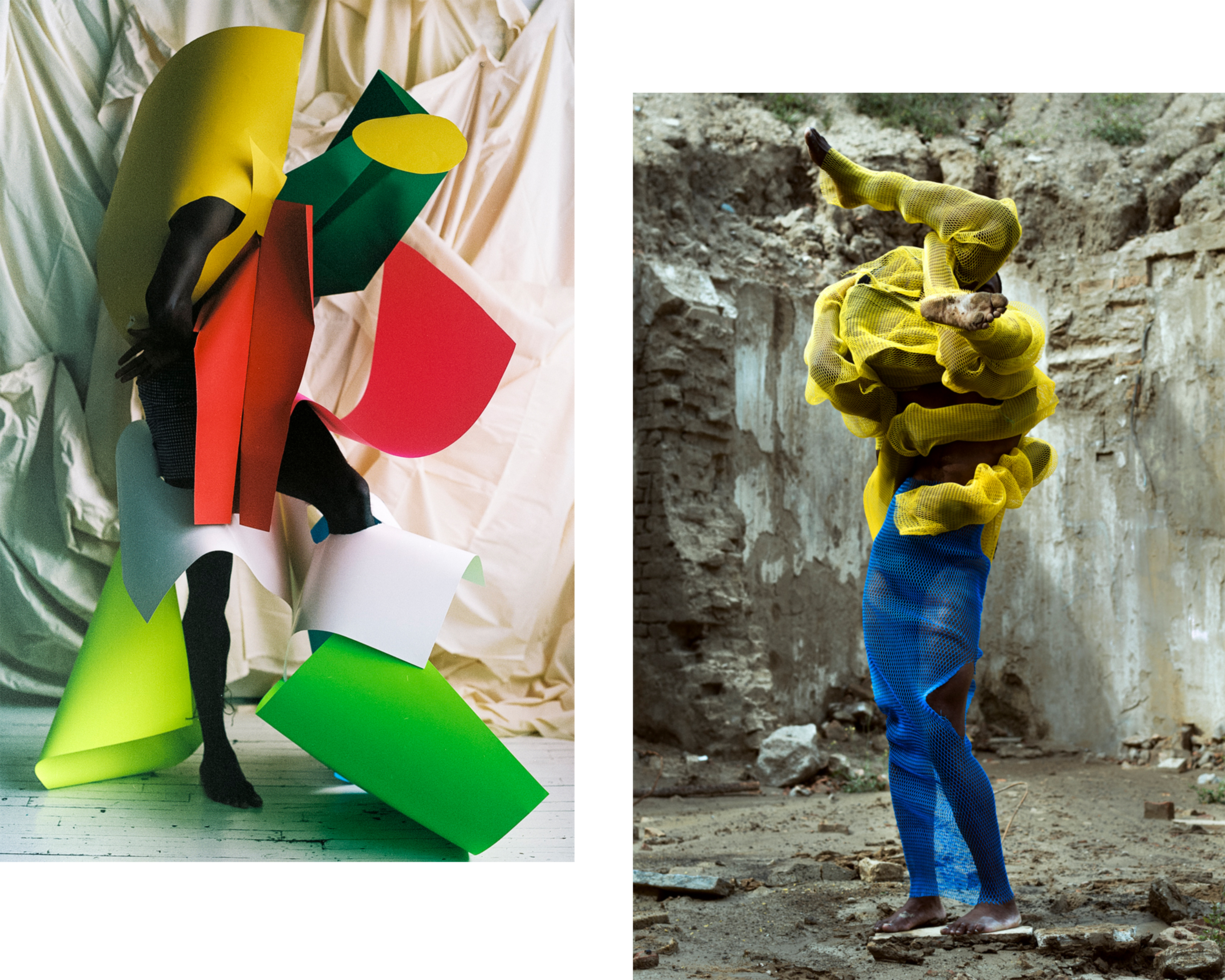 Photos by and courtesy of Luis Alberto Rodriguez.

When Rodriguez finally got a cheap digital point-and-shoot at the age of 35 in 2016, he took it on tour with him across Europe, shooting people in the city squares. From the beginning, he focused on aspects of his subjects’ bodies, like their ankles and feet. After moving to Berlin, Rodriguez made friends with people like stylist Beat Bolliger, who encouraged him to focus on photography professionally, and nightlife impresario Mac Folkes, who introduced him to the work of photographers like Richard Avedon and Viviane Sassen. “Up to that point, I had just been following my gut,” he said. “But when I realized that the work of these great artists reflected my own interests, it really gave me a path forward.”

In 2016, Rodriguez stopped performing as a dancer. But he never gave up his sense of “the body as a machine of information.” This is evident in the images he captured in Wexford.

Take “Players Stacked,” for example. As its title intimates, the hurling lads’ bodies are piled on top of one another in a rigid formation. Each one is situated in a position akin to a yoga child pose with their legs tucked under their chests—except instead of outstretched arms, they cradle their heads in their hands. In sports, head-holding is typically a reaction to a fumble or a foul, which all the players have surely experienced at one time or another. Here, however, the expression of grief becomes familial as it’s reiterated through three boulder-like bodies resting atop one another. 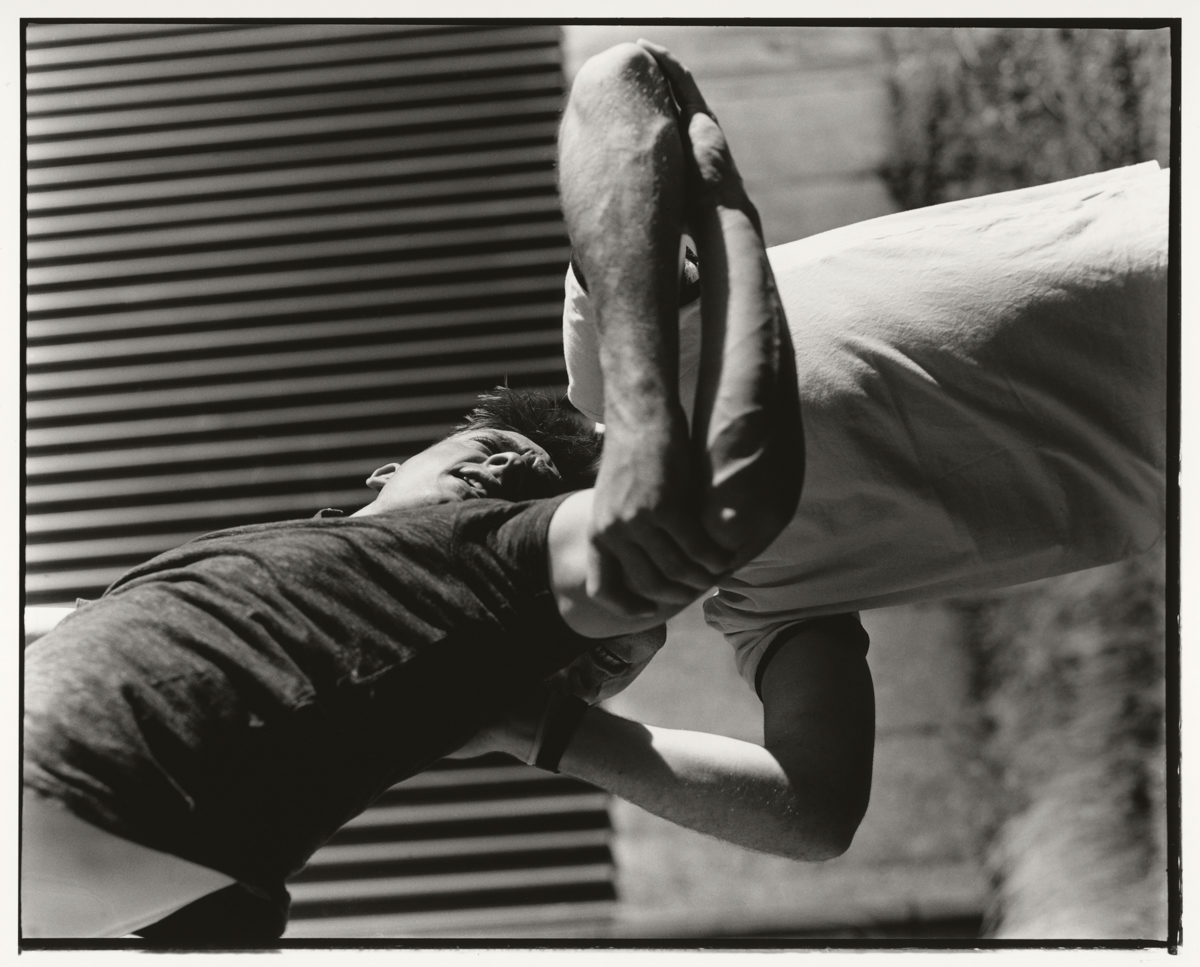 “They aren’t aware of how intimate they are with each other,” Rodriguez said of the Crossabeg-Ballymurn hurling team. With these images, the athlete's are able to express an emotional truth much different than the one they reveal on the field. And Rodriguez’s work stands out because of his ability to tap into these contradictions of power and vulnerability that exist within our movements, whether he’s shooting in the Caribbean or Northwestern Europe. For Rodriguez, when it comes to movements of the body, “there is no such thing as a neutral gesture.”