It took me ten hours and eight retries to defeat the first boss of Othercide, a tactics roguelite by Lightbulb Crew. For a game about the endless cycle of an existential fight between good and evil, that seems fitting.

I shot, stabbed, and shield-bashed The Surgeon, a colossal corvid figure with half a rusted shear in each hand, and a legion of subservient doctors and twisted therapists, into oblivion. But all those attempts to defeat him had left my graveyard, from which I can resurrect my fallen Daughters, so full that many were forgotten forever to make space for the countless other corpses falling in. Failure isn’t the end in Othercide, though, but what is the real cost of trying again?

Othercide is a timeline management tactics game where managing and planning around the order of play is as important as the actual moves you make on the tactical grid, similar to XCOM: Chimera Squad. It's also quite literally dripping in its own mythos, with a focus on its own mysterious lore and bleak vibes that set it apart from its peers.

You’re the Red Mother, the ethereal spirit of humanity’s greatest warrior, locked in an endless cosmic war with the Chosen One of Suffering, a child who was tortured, vivisected, and abused by a terrible roster of evil men so much that it fractures time and births the concept of suffering into the world. I think, anyway, because for much of the game Othercide's characters and events are as opaque as the inky black void they spawned from.

Your soldiers in this war are Daughters, moody goth ladies all with ashen white hair, fierce warriors spawned from a birthing pool and given one of a few classes: revolver-wielding Soulslingers, sword-swinging Blademasters, and buff, tanky Shieldbearers. There’s a fourth unlocked later, but these are your base three.

You send out trios of Daughters to Synapses, the battlefields upon which the eternal war is fought. They're monochromatic amalgamations of disparate time periods, within which the denizens of Suffering lurk: monstrous manifestations of humanity’s own crimes against itself. The stark color palette aside, Othercide might at first look like a conventional tactics game, albeit one with a run-based, roguelike twist. While its square grid might call XCOM and its imitators to mind, however, the timeline that governs move order is where the game gets wonderfully intricate.

Where your Daughters are placed along that timeline depends on a few factors, the primary of which is how many action points they’ve each used up. Every Daughter’s base AP is 100, and moving or using most instant actions will drain this AP. Go below 50, and you’ll enter "burst mode"; you can move further or attack more, but you’ll do so at the cost of shunting that Daughter to the end of the timeline, increasing the time it’ll take for their next turn to come along. Basically, making them do too much in a single turn will exhaust them, putting them at risk of taking more damage from more enemies with more turns in-between yours.

The back-and-forth on this timeline is just as crucial to your success as the exchanging of attacks and counterattacks on the map. You could put your trio of Daughters into motion like a perfect orchestra of violence, firing off a shot here and swinging a blade there, but if you’ve used up all your action points, it’ll mean jack shit.

There are also abilities, and Memories to equip them with, that can affect both your own place in the timeline, and that of the monsters you face. Exploring these crumbling, literally backwards spaces uncover Memories that you can equip to the various attacks performed by your Daughters. For instance, Soulslingers are Othercide’s equivalent of rogues and rangers. They can sacrifice a percentage of their health to lie in wait for another Daughter to be attacked, blasting the assailant with dual pistols before they get the chance to strike. Equipping that skill with the memory ‘Drill’ increases the damage done by that counterattack by 20%. But Memories aren’t just upgrades. They come attached with snippets of the story, pieces in the larger puzzle of how Suffering came to be. They’re fragmented and disordered when you find them, devoid of all context, but as more Memories flood into your codex, the picture on that puzzle slowly comes into focus.

Failing to grasp the importance of managing turn order and the efficiencies of my Daughters played a considerable part in why I struggled with the Surgeon, that first boss, whose legion of Caretakers buffed him with initiative modifiers that brought his place in the timeline closer and closer to the start. He’d end up having two or three full turns in the time it took for any of my Daughters to have one. Giving my Daughters Memories that pushed enemies back in the timeline and pulling off explosive combos with them served as a very effective way of balancing it out.

It took quite a while for me to understand the strategy of the timeline, and to know when I was struggling enough that I’d be better off beginning a new recollection. I also struggled quite a lot with Sacrifice. This meant training up Daughters enough that you could cast them back into the void, the only way you could heal the others. As the review guide I’d been given had told me, “One sacrificed daughter is better than three dead ones.” But… was it?

If three died, then I’d lost lives at the hands of an existential antagonist, but sacrificing put the deaths of these Daughters into my own hands. Even resurrection, an act where no lives were lost–they were regained, even–felt murky. With every resurrection you put a Daughter through, their clothes grow more tattered, their eyes increasingly sullen, their lips smudged. I’d dragged them back out from the serenity of death again and again, to fight the legion of nightmarish creatures and prevent the birth of Suffering. But isn’t that suffering, too? 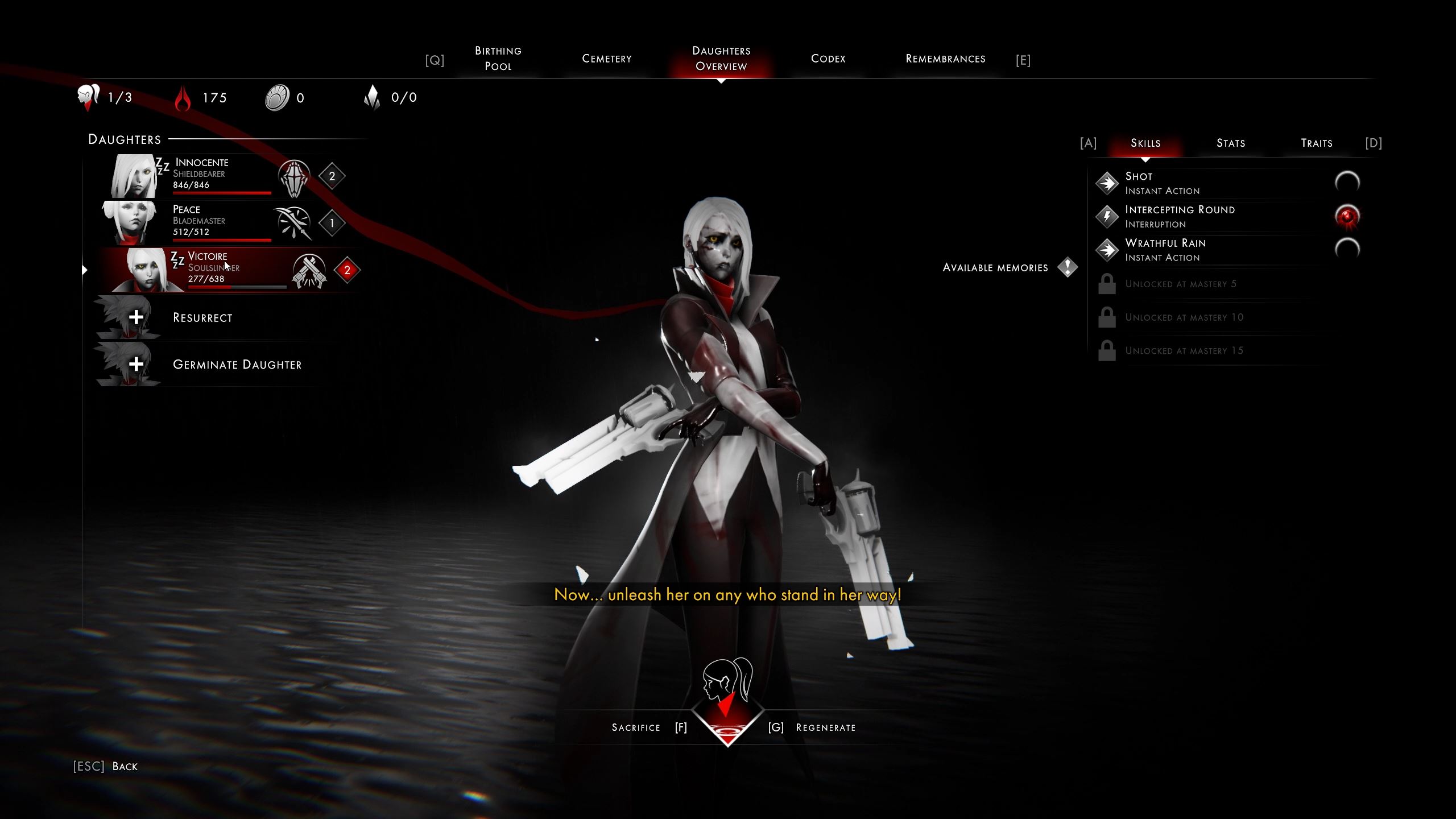 The last time a game made me grapple with this sense of putting imaginary characters with digital faces through endless trauma was Undertale. But with Undertale, it was a feeling I’d been left with at the end of its runtime, and I had a choice over whether to test the moral quandary; I didn’t. In Othercide, that Eldritch trolley problem is something you’re forced to endure in order to see its end, to understand any of what’s actually going on. I’m consumed by this dilemma, while playing a game that’s Suckerpunch by way of Edgar Allen Poe, and a soundtrack that may as well have been composed by Evanescence. And it’s fantastic, every morbid second of it. Every wince, every sigh, every kill, every death.

Othercide is a cosmic battle between good and evil, and you’re told you’re on the side of good. But through all the bodies you bury and the tortured souls you rip back out of the inky black below, only to bury again in the pursuit of ending all suffering and trying to understand how that suffering came to be, it makes you wonder what the difference really is between you and them. And I can’t get enough of that feeling.