As a registered charity serving newcomers to Canada since 2005, Windmill Microlending has supported over 5,000 skilled immigrants and refugees with low-interest microloans. Windmill’s loans offer financial help to newcomers to afford the costs of licensing or credentials. Often, immigrants don’t have access to other credit because they have a low income or no Canadian credit history. A loan from Windmill is what they need to achieve career success in Canada.

Denim, a lawyer from England, is a great example that demonstrates the impact of a Windmill loan in the life of skilled immigrants. His story shows how determination and hard work, together with a loan from Windmill, made all the difference in his journey to become a Canadian lawyer. 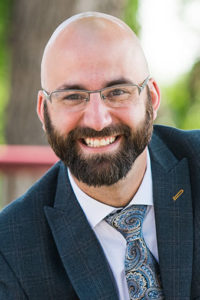 When Denim was a child, his grandfather bought him a Reader’s Digest Know Your Rights book, an unusual present. He never looked at it. At sixteen, while working in a restaurant, he believed the owner was taking advantage of him by refusing to pay his wages.

“I went home and saw my grandfather’s book. There was a section on employment standards. I crafted a letter and posted it on the door of the restaurant. At that point, I knew I wanted to study law and help others understand it,” recalls Denim.

A year after graduating with a law degree in England, Denim arrived in Saskatoon. Soon after, he set up interviews with law firms but ended up working in a restaurant kitchen. Nonetheless, a year and a half later, Denim secured a job as a paralegal. Over the next few years, he worked as a corporate paralegal and a floating legal assistant.

Denim learned about Windmill from a colleague. He applied for a microloan and was approved. Initially, it helped him pay for the application to start the assessment process of his law degree.

The assessment indicated Denim needed to write nine exams. To practice law, professionals must be permanent residents or Canadian citizens, but he was neither at the time. So, he put the process on hold.

Almost six years later, Denim became a permanent resident. He was eligible to apply for entry to the law society bar admission process, but he couldn’t secure a placement. Denim found an alternative – he could attend a law practice program (LPP) at a university in Toronto.

When Denim was required to pay a “call to the bar fee,” he reached out to Windmill one more time. After eight months, during which he studied for 30 hours a week and worked in a restaurant for 60 hours a week, Denim passed the Bar exams and the LPP program. He was now a lawyer.

One day after finishing the LLP program, Denim packed his car and drove back to Saskatoon. Three weeks later, he received a job offer from a law firm.

“Had Windmill not been there to provide financial support, it would not have been financially viable for me to become a Canadian lawyer,” observes Denim.