While working on a comparison of the Ford Mustang Mach-E and the Ford Escape, I found a detailed document on technical specifications of the 2021 Ford Mustang Mach-E. There’s a lot of information in there that might be interesting for people, but the document might also be a case of “too much information.” So, I’m pulling out some key specs and features that interest me or that I think would interest a lot of people, along with a bit of commentary. I could not find the cargo space of the Tesla Model Y with the back seats up, but the cargo space with them down is 68 ft³, while that figure is 43 ft³ for the Model 3. For the Mustang Mach-E, that figure is 60 ft³. So, it has nearly as much rear cargo volume as a Model Y, and considerably more than a Model 3.

For those more familiar with mass-market gasoline vehicles like the Honda CR-V, Nissan Rogue, or Toyota RAV4 — the three top selling compact SUVs in the United States (the Ford Escape is #4) — here are their specs with back seats up and back seats down for comparison:

Overall, unless you have the need to haul around an enormous amount of stuff, the Mustang Mach-E has you covered. There is a little bit less space than you’d find in a Honda CR-V, Nissan Rogue, or Toyota RAV, especially when the back seats are down. But, seriously, are a few inches anything compared to all the extra fun and greater convenience (of home charging) you’d get with a Mustang Mach-E? I think not. 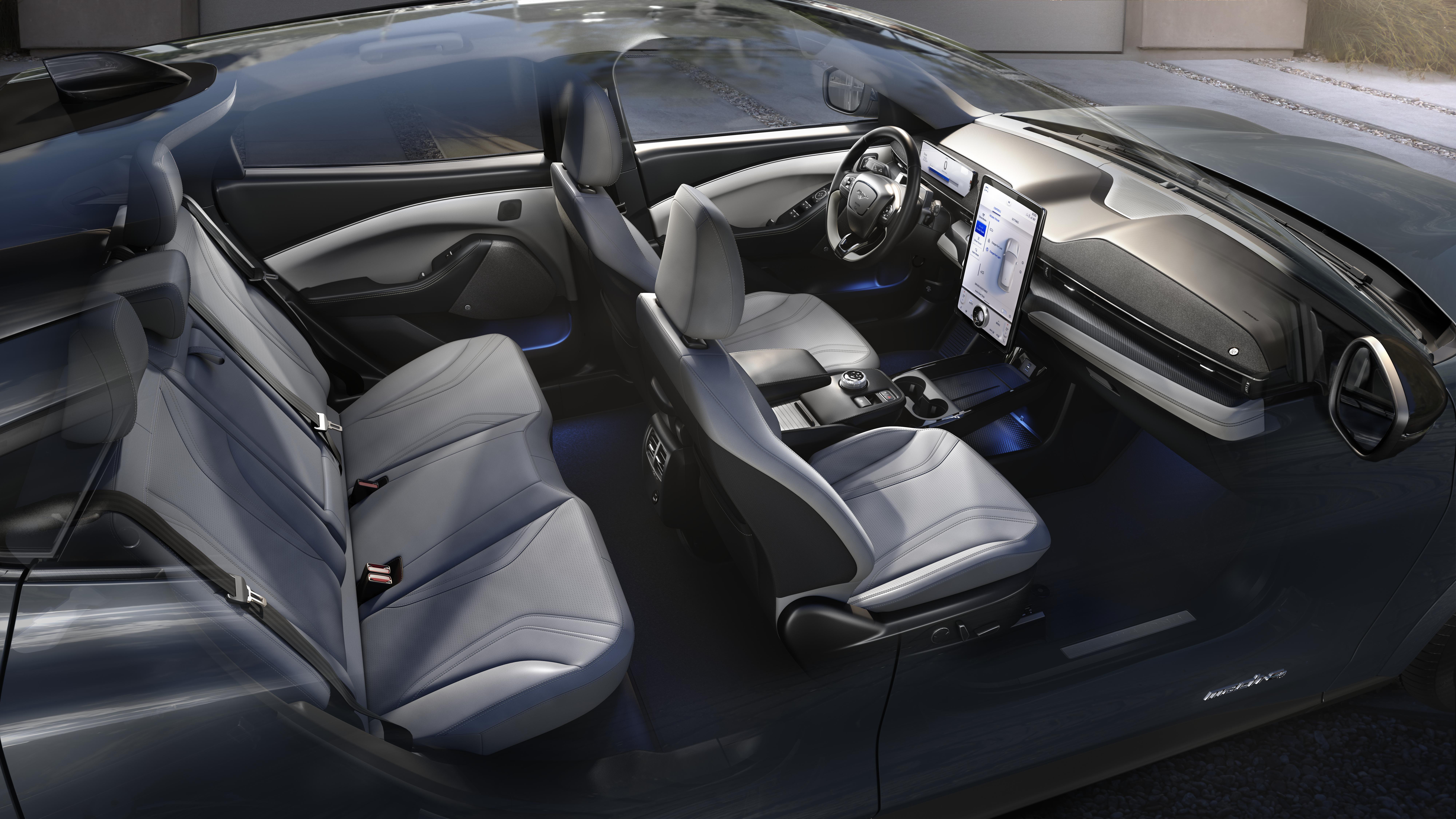 Being a decently sized crossover, I think the vast majority of buyers would find the interior of a Mustang Mach-E comfortable. I do not typically examine specs like these, so they mean nothing to me, but here are specific specs regarding interior space if you want to compare with a certain other model (all figures are in mm):

You have a mixture of different powertrain options and battery sizes, so range varies. Also, there are not official ratings yet, but they are educated estimates that should come close to the final numbers. I will update this article when the official numbers come out, though. Here are several different options by trim and battery:

For some context, for many years, max capacity at a Tesla Supercharger was about 115 kW. I personally think this is completely adequate except in odd cases. If you take long trips a lot, though, or happen to need to charge super quickly, the 150 kW capability will be appreciated.

All of that said, though, charging stations that provide 115 kW or more power output are not extremely common yet. So, you may find yourself charging at a 50 kW station anyway, unable to get close to the 115–150 kW peak charge rate of your Mustang Mach-E. However, the Electrify America network has been growing fast and other networks, like the EVgo network, have been upgrading to superfast/ultrafast charging stations as well.

The easiest way to find out what you have in your area and along key routes is to visit a site like Plugshare or ChargeHub and double check on Electrify America, EVgo, or other regional charging networks if needed. Look — acceleration in any Mustang Mach-E, especially thanks to its fully electric instant torque, is going to feel amazing. But if you really need to have more umph, here’s how the options break down ordered by acceleration: Having a couple of little girls and often having to load up a ton of stuff in my arms, a foot-activated power liftgate is especially attractive. (Though, I guess more attractive would be if it closed by itself as I walked away.) I was happy to see the power liftgate on some Mustang Mach-E trims, but it’s not on all of them, so pay attention to this if this feature matters a lot to you.

Well, the foot-activated power liftgate is actually on all models except the Select options, the lowest-cost trim. Similar to the power liftgate, heated seats and a heated steering wheel are a nice comfort feature that matter a lot to some people and very little to others. Living in Florida, I hardly ever use the seat heaters on my Tesla Model 3, but even down here it’s nice to use them instead of air heating when it gets a tad chilly in winter.

Going through the different trims, here’s how the options are split on the Mustang Mach-E: I love a glass roof. Some don’t care and some actually don’t want one because of the potential heat gain on your head. Here are the Mustang Mach-E models with the fixed-roof panoramic roof:

(That means it’s not on the Select or GT trims.) There are various connected-vehicle and driver-assist technologies available on different versions of the Mach-E. I assume you should play around the with car in person to get a sense for which of these you like and want and which you don’t like or at least don’t feel a need for.

Similarly, there are many more exterior and interior features you can scope out in person or in the full specs doc.

All photos courtesy Ford except the Mustang picture by Jennifer Sensiba for CleanTechnica and Electrify America charging station picture.