According to local legend, more than 200 years ago on a relatively secluded island in the northeast Atlantic, a young boy named Daniel McGinnis spotted a block and tackle—a rope-and-hook pulley system used to lift heavy loads—hanging from an oak tree, and below it, a depression in the ground. Naturally, he and his friends began to dig.

What would ensue for the next two centuries would be one of the most infamous and expensive recorded treasure hunts in the Western world, with the site having been rumoured to be the resting place of everything from the Holy Grail and Shakespeare’s original manuscripts to Marie Antionette’s jewels and Captain Kidd’s secret fortune. No great treasure has ever been uncovered, since no one’s been able to successfully get to the bottom of the island’s numerous holes without them caving in, flooding, or even causing death: several treasure hunters died in their futile quest in the 1960s.

The eerie island’s seemingly inexplicable oddities seem to pile onto one another—from mysterious tunnels and strange artifacts, to masonic lore and impossibly-inaccessible treasure shafts. But what if the real “curse of Oak Island” is that there isn’t anything buried there at all, and it was nothing more than a perfectly spun story that got way out of hand? Do the facts (and lore), when laid bare, present a plausible treasure trove, or a wartime cover-up?

Oak Island is a 57-hectare privately-owned island located closely off the coast of Nova Scotia’s south shore, about an hour drive from the provincial capital of Halifax, and a 30-minute drive from Lunenburg—a historic town and UNESCO World Heritage Site with a population of 2,000. The island—shaped strangely akin to a baby elephant—is one of many tree-covered pieces of land mounting above sea-level situated in the nearby bays and basins—almost a jigsaw piece itself in a land-and-sea puzzle.

The fact that such a place—that is, a real-life x-marks-the-spot, death-toll-tallying, urban legend of an island—actually still exists in 2020 is something that is profoundly intriguing and unnerving, both in equal measure.

“It’s certainly not something you can simply dismiss,” Randall Sullivan—author of The Curse of Oak Island—said to me over the phone, from his home in Oregon.

Sullivan, who was also a contributing editor of Rolling Stone for 20 years, said the book originated from an article he wrote for the magazine back in 2003, after hearing about the legend from a colleague. He also was a member of crew of the TV show The Curse of Oak Island, a History Channel series that follows American brothers Rick and Marty Lagina on their search for treasure on an island that they reportedly mostly own (through a partnership with Oak Island Tours Inc.). Sullivan, who ended up spending a month on the island as a member of the show’s crew, said he thinks there is something of “extraordinary significance” buried on Oak Island.

“I’m not hypothesizing, but I’ve certainly given plenty of attention and consideration in (my) book to people who hypothesize that it's the treasures that went missing in Jerusalem during the Crusades. Which would be the Holy Grail and the Ark of the Covenant, and what was called the True Cross,” he said

Chris Webb—a local bookstore owner and former marine engineer—says he’s watched every single episode of the show (which is narrated by the same titillatingly-undue voice as Ancient Aliens). Webb subscribes to the belief that there is a gold treasure buried beneath the island—specifically that of a New England ship captain’s—that has yet to be found.

“Sir William Phips was coming back for it to take it to England to help at the time,” Webb said from across the counter at his bookstore in nearby Lunenburg. Phips had garnered some fame in the 17th century for recovering treasure from a sunken Spanish ship, and also played a role in establishing the Salem Witch Trials. “He apparently did come back for it, and started bailing the water out of the pit because of the gypsum; it was porous. And when they bailed the water out, it imploded. The tunnel imploded and that was it,” he said. “There were people down there who died.”

Nearly two centuries later, in August 1965, one of the island’s most tragic recorded events took place—locally known as the Restall Family Tragedy—when, after six years of living on Oak Island in search of treasure, Robert Restall was sealing what he thought was a storm drain on the island. Soon after descending, Restall was overcome by hydrogen sulfide. His son went down to save him, and then two other men followed them down to help with the rescue effort. All four men were killed by poisonous gases within the shaft that day. Today, at the site of the incident, there is a memorial stone with their names engraved on it.

Kel Hancock—a Nova Scotia native and alleged fifth great-grandson of Daniel McGinnis, the young boy who’s claimed to have first discovered the treasure area in 1795—thinks the treasure hunt is nothing more than the rabbit hole result of a wartime cover-up for a smuggling site during the American Revolution, primarily for gunpowder.

“When more people settled Chester Township area, in order to cover up and gloss over the level of sedition and the level of (U.S.) sympathy in that area in the few years previous, they spun a story that would explain the strange lights, the strange sounds, and ships coming and going” from the island, he said.

Hancock, who’s a historian and retired military officer from Windsor, about an hour away from Oak Island, also worked with the Lagina brothers as a historical consultant from 2014 to 2016. Despite the numerous clues, traps, or tunnels found on the island over the past few 100 years, Hancock firmly denies any fantastical significance.

One of the first printed accounts of the Oak Island story was published in a letter in the Liverpool Transcript in 1862, penned by J. B. McCully. Hancock said it was this letter—about 67 years after the mystery of the island was first stumbled upon by his distant relative—that claimed there were oak platforms buried beneath the surface every 10 feet and an inscribed stone at a depth of 90 feet.

The stone—which allegedly has been missing since the 1930s—reportedly had a message written on it that, when deciphered, read, “Forty feet below, 2 million pounds are buried.”  But Hancock said he believes the stone was an added embellishment to the story.

According to Hancock, McCully, like himself, was a freemason. He said McCully started “sprinkling in masonic lore” as a tactic to attract investment from wealthy freemasons who might take the lore more literally. It’s reported that  among the many hopefuls and adventurers who flocked to the island in search of treasure over the years was pre-U.S.-president and freemason Franklin Roosevelt—who reportedly spent several months there in 1909 as a member (and investor) of the New York-based Old Gold Salvage and Wrecking Company. 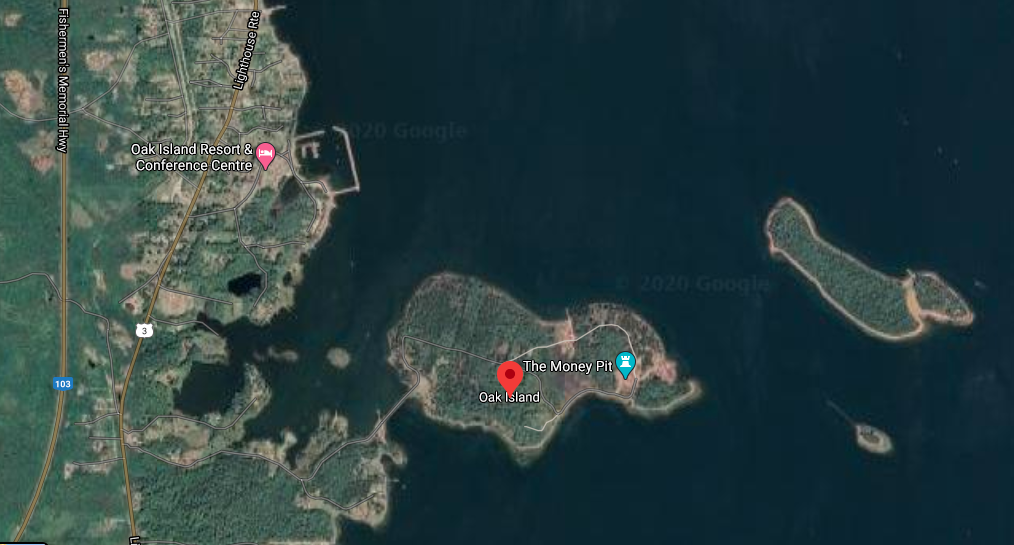 A satellite image from Google Maps.

Stumped followers of the island’s findings also point to puzzling discoveries that are said to have been found between the layers of oak platforms in the island’s “Money Pit,” some 60-feet below the ground. Among the weird matter: putty, charcoal, and coconut fibres, the fibres being a particularly unusual discovery seeing as the nearest coconut trees are roughly 1,300 kilometres away in Bermuda—almost exactly 90 degrees south.

Hancock dismissed the direct link to Bermuda, saying that coconut was commonly traded between Nova Scotia and the West Indies 300 years ago. Its fibre was often buried in the sand as part of the drying process to be used as packing material for shipping, as well as cushioning material for furniture, he said.

“I think quite honestly it was a cover story that got out of hand,” he said. “And then each successive treasure hunting expedition has found either colonial artifacts or artifacts from previous treasure hunters, and mistakenly interpreted those things as evidence of buried treasure.”

“I don’t believe there's treasure on Oak Island,” he added. “But I’d love to be proved wrong.”

Late last year, on an uncharacteristically calm, blue-skied day, I drove from Halifax to Oak Island to see the legendary site for myself. I drove onto the small, snow-covered island, and parked in front of a wide steel gate that appeared to have a passcode keypad. I soon heard—and saw—two loud trucks coming towards me from the direction of the infamous Money Pit area. I waved down the men as they got out of their vehicles. They were locals, hired by property owners on the island, who were finishing up a day of work building a stone wall to protect one of the island’s coves from erosion. I asked one of the men, who was from Lunenburg, what he thought, if anything, was buried on the island.

“Nobody really knows,” he told me, adding he didn’t want his name used—probably so it wouldn’t get back to his employer, since Oak Island is private property. “Something happened; who knows what? This place has been stirred up so many times; how could you really say what’s what?”

Aside from the workers, I encountered nothing but stillness during my quick visit to this strange, storied, beautiful place. I made my way back to my truck, hopped in, and drove off the narrow causeway, feeling a fraught electricity—perhaps the same buzz that’s kept the island and its legend afloat for as long as it has.

Whether the tackle spotted hanging from the oak tree in 1795 was put there as a marker or as bait, we’ll probably never know. But with so much death and debt having been swallowed by Oak Island since, it begs the question: to what lengths, or depths, will we continue to go?