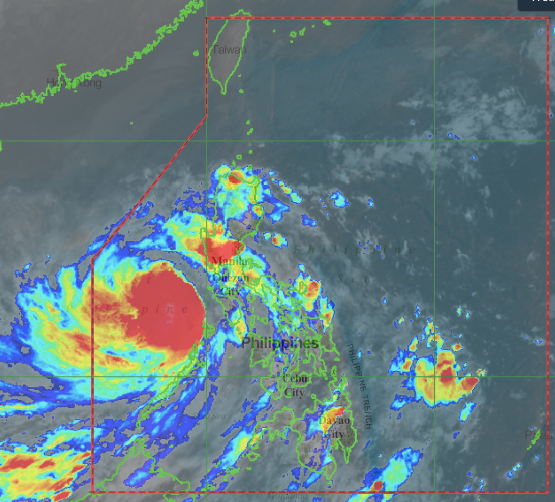 MANILA, Philippines — Typhoon Quinta may even intensify further as it hovers above the West Philippine Sea while moving away from the country’s landmass, state meteorologists said on Monday afternoon.

The latest severe weather bulletin from the Philippine Atmospheric, Geophysical and Astronomical Services Administration (Pagasa) showed that Quinta had started re-intensifying. It again packs maximum sustained winds of 130 kilometers per hour (kph) and gustiness of up to 160 kph.

It is expected to reach its peak intensity in the next 24 hours.  As of 4:00 p.m., it was already at a distance of 310 kilometers west of Calapan City in Oriental Mindoro and is expected to leave the Philippine area of responsibility (PAR) by Tuesday morning.

FEATURED STORIES
NEWSINFO
Class, work cancellations due to Typhoon Quinta
NEWSINFO
DFA’s Locsin to Angel Locsin’s critics: ‘Anyone who messes with her will get it’
NEWSINFO
Rosario Domagoso, mother of Manila mayor, dies at 74

Meanwhile, the low-pressure area (LPA) over the Pacific Ocean was last seen 1,945 kilometers east of Southern Luzon.  While it may enter PAR by Wednesday or Thursday morning, it is not yet expected to intensify into a tropical depression.

Still, Pagasa advised residents to monitor updates and developments regarding the said LPA.

As of now, Tropical Cyclone Wind Singal No. 1 is raised only in the following areas:

Despite Quinta moving away, its trough and cloud bands being dragged by the typhoon may still bring moderate to heavy rains in Occidental Mindoro, Oriental Mindoro, northern Palawan, including Calamian and Cuyo Islands, Calabarzon, Aurora, and Isabela.

Moderate to heavy rains will also occur in Cagayan, Apayao, Kalinga, Abra, Ilocos Norte, and Ilocos Sur, this time due to a frontal system up north.

Both weather systems will then cause light to moderate with heavy rains over Metro Manila, Western Visayas, Zamboanga Peninsula, Bangsamoro, and the rest of Luzon.

Pagasa warned that flash floods and rain-induced landslides are possible, especially after heavy and prolonged rainfall, especially in low-lying areas and those near slopes.

For Tuesday, warmer weather is expected for Legazpi City after being hit by Quinta, with temperatures of 26 to 32 degrees Celsius; Metro Manila and Tuguegarao may see something between 24 to 32 degrees; while it may go down further to highs of 28 and 29 degrees in Tagaytay and Puerto Princesa, respectively.

The western portions of Visayas and Mindanao may still experience rains on Tuesday due to Quinta’s trough, as Iloilo may feel temperatures around 25 to 31 degrees Celsius while for Cebu and Tacloban, it would be at 24 to 32 degrees.   Davao, on the other hand, may have temperatures of 25 to 33 degrees.

A gale warning remains in effect over the northern seaboards of Luzon, as well as the whole coastal area of Ilocos Region down to Central Luzon in the west, and also in the eastern part which includes Cagayan Valley; waters of Southern Luzon and the Visayas, including Palawan, are also under such warnings.

This means small boats are not allowed to operate as sea conditions may be rough to very rough. [ac]