Early this morning, the FBI arrested a member and an associate of neo-Nazi terror group the Base in Michigan, the latest in a sweeping nationwide crackdown against the group that started in January. In all, nine members of the Base now face various terrorism-related charges.

In a pair of separate arrests in different parts of Michigan, federal agents apprehended Justin Watkins, 25, of Bad Axe and Alfred Gorman, 35, of Taylor on multiple counts including gang membership and using computers to commit a felony. (The Base was known to conduct all of its organizing on the encrypted chat app, Wire.) Watkins, under his alias, had previously claimed to be a leader of the group who took more control after several members were arrested in early 2020.

Do you have information about the Base or other extremist groups? We’d love to hear from you. You can contact Mack Lamoureux and Ben Makuch securely on Wire at @benmakuch and @mlamoureux, or by email at mack.lamoureux@vice.com or ben.makuch@vice.com.

“We cannot allow dangerous activities to reach their goal of inflicting violence and harm on the public,” said Michigan Attorney General Dana Nessel in a statement. “I am proud to work alongside law enforcement agencies at the local, state and federal levels to safeguard the public’s safety from these serious threats.”

In early 2020, the Base imploded following a series of high profile arrests of many of its most prominent members and an anti-fascist inflitrator taking control of their propaganda network. Many of the remaining members abandoned the group and its 47-year-old founder, Rinaldo Nazzaro, went into hiding. Despite this, the Michigan cell was one of the group’s last remaining strongholds. One of the Michigan members had access to property which frequently appeared in propaganda videos posted to the Telegram app on what was believed to be the official account for the terror group. 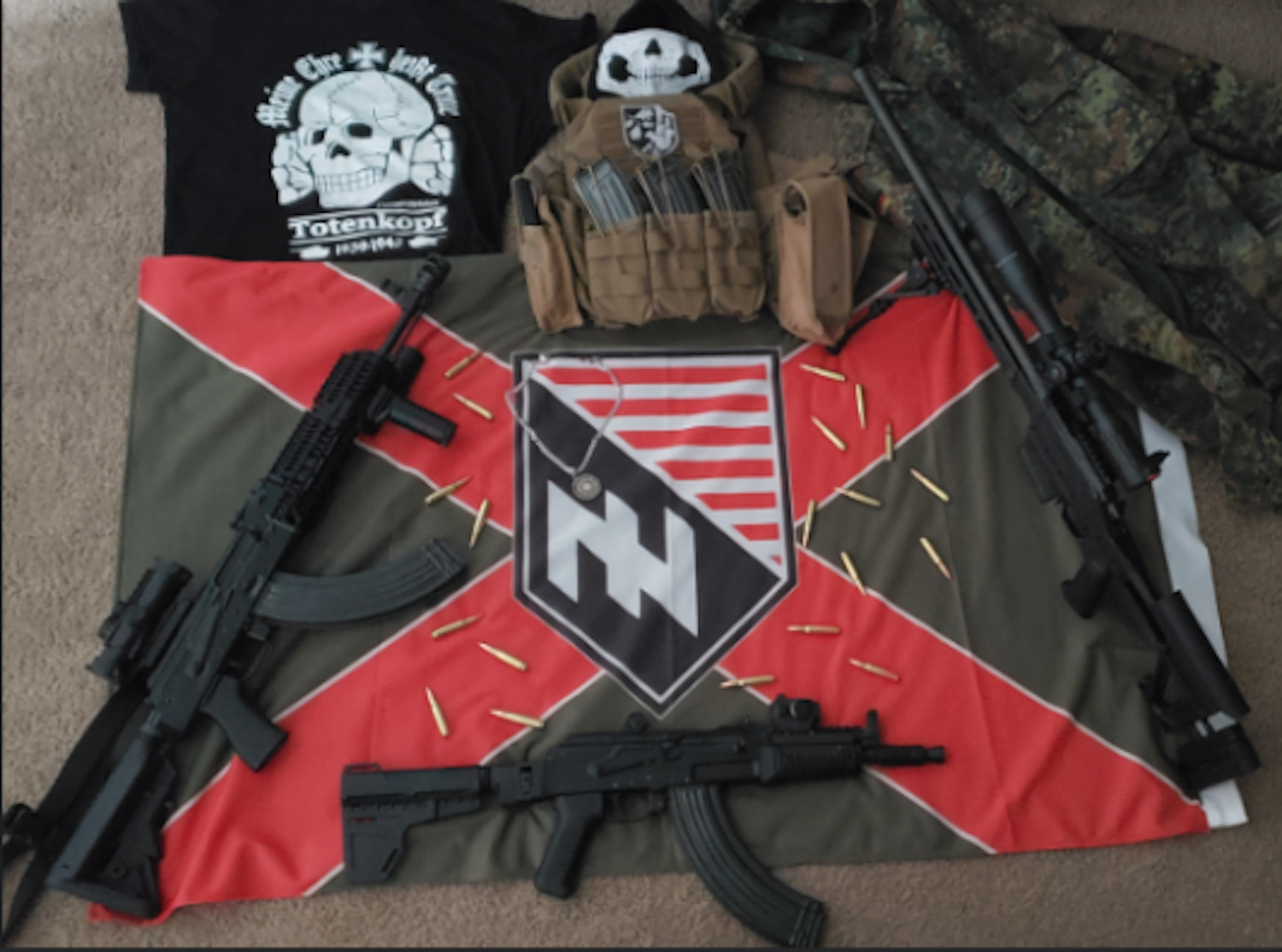 Photos of weapons and Nazi paraphernalia posted by AK in the groups encrypted chat.

The latest arrests add to separate operations in Maryland, Georgia, and Wisconsin that have taken down regional cells of the Base, a significant blow to an organization that once plotted for “race war,” and comes at a time when authorities fear white nationalist violence in advance of the presidential election next week.

After the implosion of the Base earlier this year, Watkins allegedly took the mantle of what was left of the group. The DOJ release describing Watkins and his alleged crimes matches the information of a member of the Base who went by the alias “AK” to rest of the group. AK was known inside the Base as aggressive and enthusiastic, organizing “hate camps” (neo-Nazi speak for paramilitary training sessions) on his friend’s property in rural Michigan.

AK joined the Base on September 12, 2019 after being vetted by senior members of the group including Nazzaro. In his vetting call, AK said that he had read Siege—an influential book among neo-Nazis that urges them to commit violence to hasten the collapse of society—multiple times and heard about the group from a friend and met a member of the Base on a weapons forum. He said he was formerly associated with a local Michigan group called Aryan Resistance. He said he would describe himself as a “militant” who is a hardline neo-Nazi.

"It's your duty to your nation to be able to take care of yourself and stand on your own,” he said when asked by Nazzaro about why he wants to be a member of the aspiring neo-Nazi terror group. “That's what (America) founded on, every man being a member of the militia. Now there is no standing or a militia so it's more important than ever to take it upon yourself."

Ironically, during the initial raids of the Base earlier this year, AK—the user whose information lines up with that of Watkins—posted about what he would do if he was faced with an FBI raid. According to the post, he bragged that he would rather die than be taken by police and outlined a plan he had to kill officers if they came to arrest him.

“Why would I sit in my house and get surrounded when I have a nice big scope,” he wrote. “Burn me out like [Patrik] Mathews? Not if I can avoid it.” (Mathews, a former Canadian soldier and member of the Base, slipped into the U.S. illegally in 2019 to join the group and was then arrested by the FBI in a January raid.)

“I don’t fear death. I will openly admit I fear being locked in a cage with [racial slurs]. Valhalla is the only choice.” 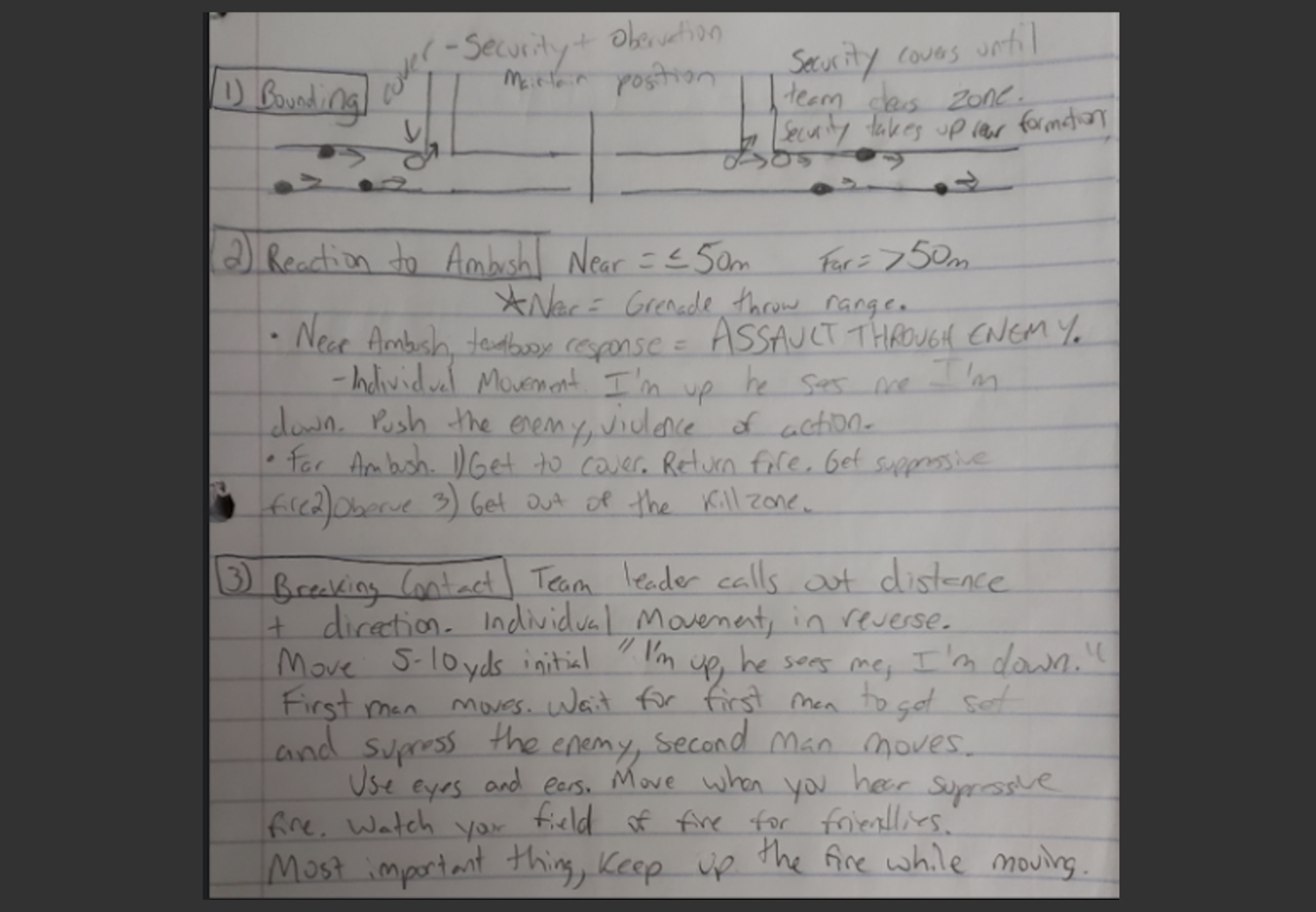 Handwritten plans for paramilitary training AK was planning on doing when neo-Nazis members went to a meet up in Michigan.

Some of the charges stem from a December 2019 incident, where it is alleged that both members of the Base posted threatening images online of a home in Michigan they mistakenly believed to be the residence of an antifascist podcaster. Authorities were alerted to the posts and discovered that the homeowners had nothing to do with the podcaster.

In December, AK posted a link to a supposed doxx of the podcaster in the group’s encrypted chat. The neo-Nazis quickly started to make a plan surrounding their new information. One user suggested that they “take pics on their front porch holding rifles.”

“I think the best message is simply, ‘Hi’,” wrote AK in response. “No rifles. That could be taken as a threat.

When the group discovered they had used bad intel on the address of the podcaster, members were embarrassed and swore to never let a gaffe like that happen again.

"Wait, it was the wrong house? I’m going to be honest. That’s cringe” wrote one user of the Michigan cell’s mistake. “That's something you triple check before making prop of that nature."