A decade ago when Keenan Bush first decided to trade his city life in Vancouver for the “island vibe,” he hitchhiked his way to Tofino, a tiny coastal town with white sandy beaches and old-growth rainforests, about 300 kilometres away. Tofino has long been known as Canada’s surf capital and “original hippie town,” drawing transient individuals that reject conventional ways of living since the highway to the town was paved in the 1970s.

Initially Bush camped at one of the town's campgrounds, and eventually found himself at the hippie commune Poole’s Land, where residents performed chores like picking cannabis leaves and planting psychedelic mushrooms to pay off their stay. But after only a few months, he went back to Vancouver due to limited job opportunities. (Poole’s Land was shut down in November 2019. Founder Michael Poole died earlier this year.)

After his first unsuccessful move, Bush came back to Tofino a year later. Knowing how difficult it was to find housing in the small town of 2,000, he decided to live out of the back of his van. “I’ve moved eight times, and I’ve been here for eight years,” said Bush, who’s now employed at a surf shop in Tofino.

For years, it was common for people travelling through Tofino to sleep overnight in their vans. Tofino’s tourism board even uses a branded VW camper van in its advertising. Other than the occasional local who would disapprove of his living arrangement, Bush and the few others living out of their van at the time didn’t run into any problems with bylaw officers.

“Back in those days, there were so many more properties that weren't developed yet in Tofino, so you could just pull into a driveway at night, sleep, and then wake up in the morning and pull out of it and that was no big deal,” said Bush. “But a lot has changed now.”

Bush said it’s “damn near impossible” to find an affordable place to live out of your RV or van right now; parking in a commercial campground runs at about $1,000 a month. The lack of affordable housing has long been a problem, and the coronavirus made it worse. 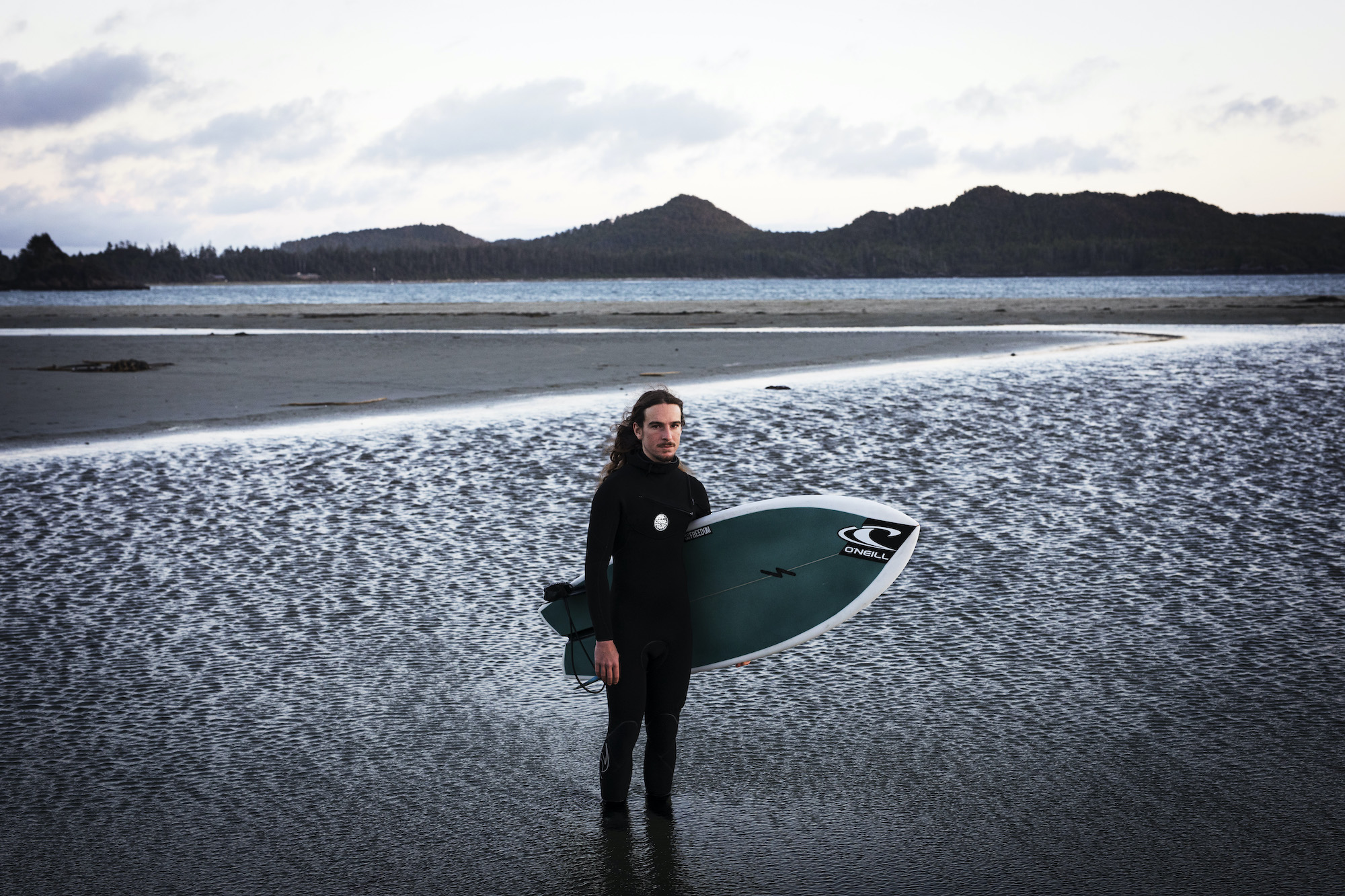 When preparing to reopen in July after a three-month shutdown due to the pandemic, the District of Tofino told VICE News it expected to face an unusually quiet season and had concerns that the town would be “seriously affected by lack of business.” But instead, Tofino experienced “a huge influx of tourists” looking to escape COVID, and a corresponding increase in problems with vanlifers.

Locals say vanlifers are responsible for littering the town with garbage, “shitting on people’s lawns” and on the road, and destroying the natural environment. Tofino has even implemented a zero tolerance bylaw enforcement, fining vanlifers $200 if they are caught littering or camping illegally in town.

“Those were some of the outcomes of people who wanted to come to Tofino to escape COVID,” said Nancy Cameron, the executive director of Tourism Tofino. “It certainly creates strain in a community or in a neighbourhood when you can’t find your own parking spot or you’ve got transient people living in your neighbourhood.”

Because of occupancy limits due to the pandemic, hotels and resorts in Tofino were offering more limited capacities this summer and Bush believes that prompted more people to sleep in their van. “People may not feel comfortable with sleeping in a hotel room and trusting that it's been properly cleaned and sanitized,” said Bush. “The problem is the town does not have the facilities and amenities to have a bunch of people camping in their vehicles that don’t know how to camp.” 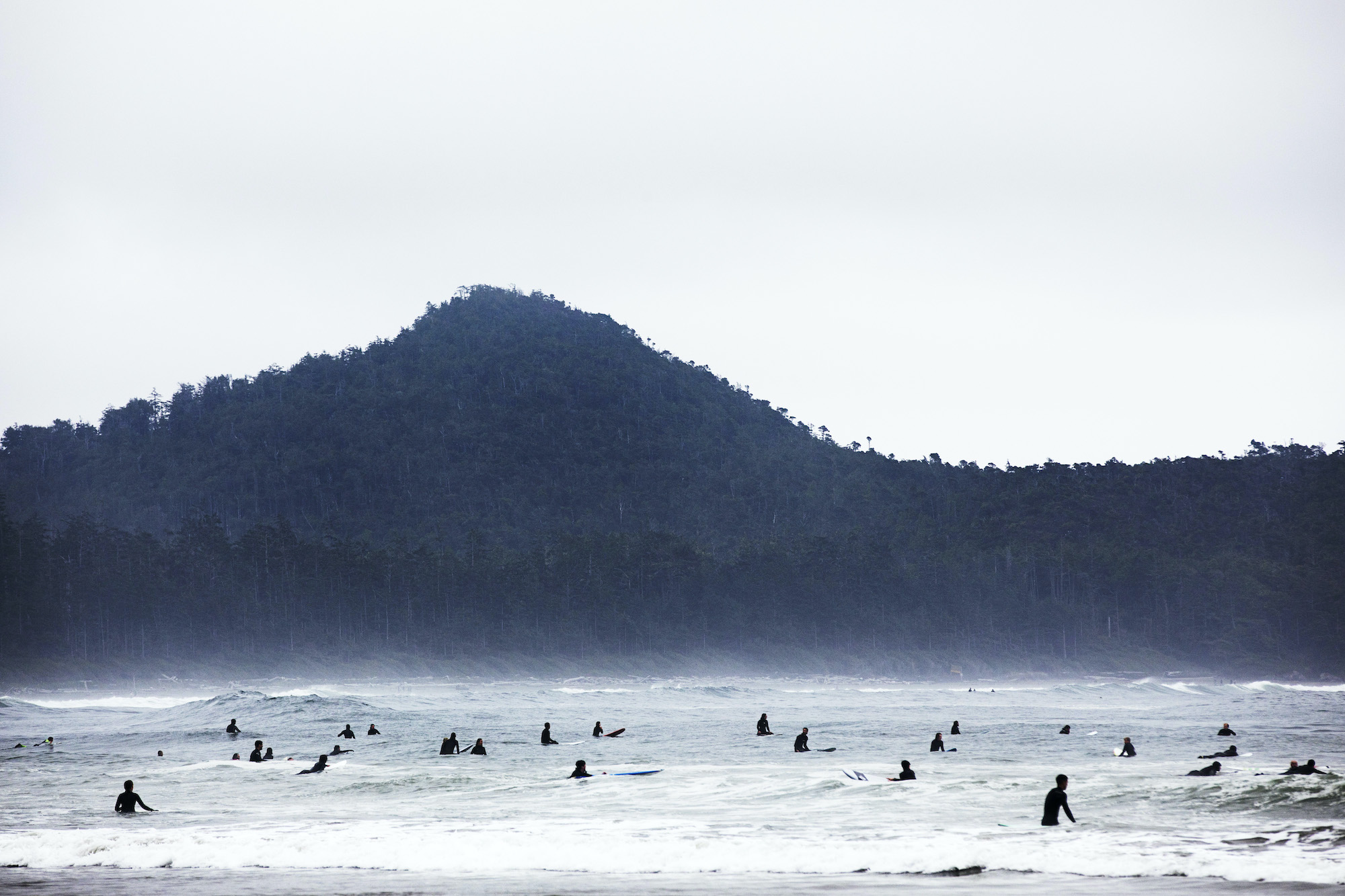 There are many motivations that could have brought even more vanlifers to Tofino this year. With few activities available during the pandemic, Tofino’s surfing industry had its busiest summer ever, especially among some young people who took advantage of the Canadian government’s $2,000 monthly Canadian Emergency Response Benefit (CERB) offered this year from March to September to those affected by the coronavirus.

“During the closure, amongst the people that live in town, we almost ran out of surfboards for sale—we started calling them CERB-boards—because everyone working here was like, ‘Well shit, I got nothing else to do and I’m getting paid so I may as well buy myself a new surfboard,’” said Krissy Montgomery, the owner of Surf Sister Surf School.

While all of Montgomery’s staff came back to work when the town reopened, she said many businesses were still struggling to find workers. Not that it was a new problem for Tofino: even before the pandemic, more than half the local businesses had difficulty staffing during periods of the year. Montgomery said that has a lot to do with the town’s longstanding housing crisis: there’s nowhere affordable for people to live.

“I moved here 22 years ago and I had to take a job with staff accommodation because there was a housing crisis 22 years ago. Since then, Tofino has only gotten more popular, so this problem has gotten more intense,” said Montgomery. 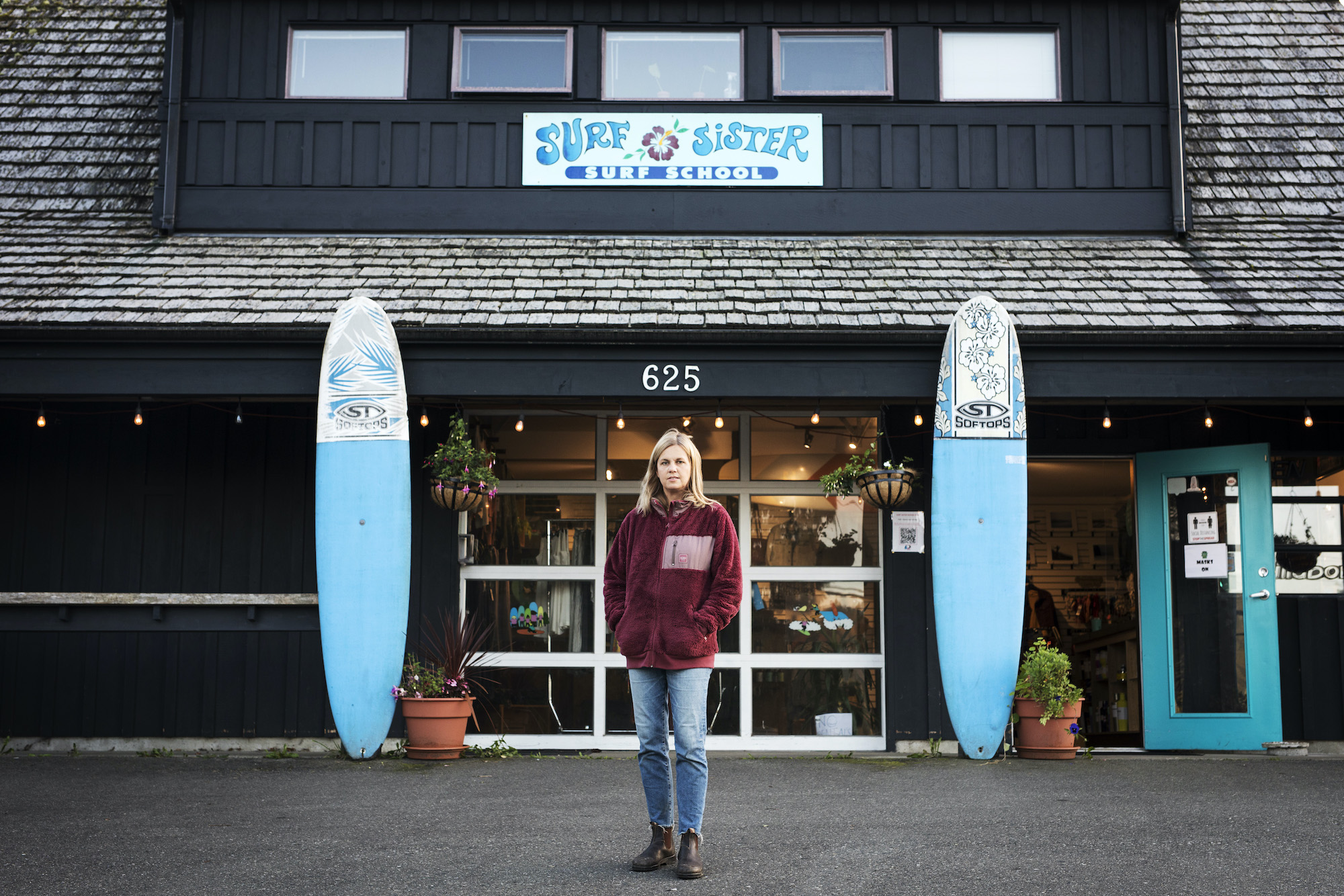 Like many businesses in Tofino, Montgomery provides subsidized accommodation for her staff. “We almost double our staff in the on-season, and there’s no chance they would find homes on their own,” she said.

Located in the heart of the town, Crab Apple Campground is the only affordable option for Tofitians that live in their van, with prices starting at $500 a month. All residents that live on the campground must be employed in the area, and it’s currently at capacity with around 45 residents.

“I have people from all walks of life here in Tofino staying here. One guy is the tech guy for the Wickaninnish Inn; he’s been here almost two years. A girl who is the manager of one of the restaurants here in town—she’s been here for three years,” said Matthieu Amin, the campground’s owner. 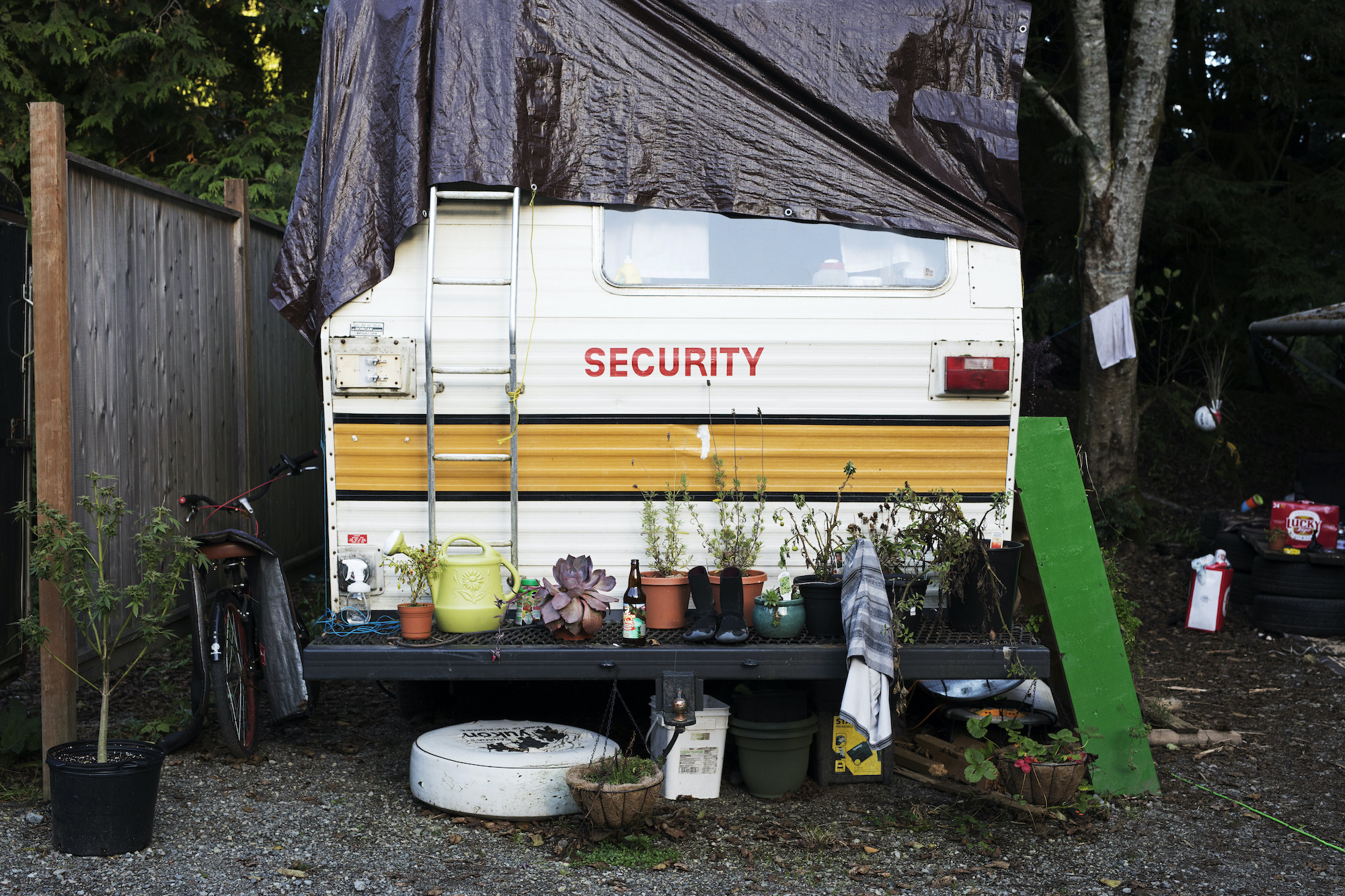 The campground currently operates under a temporary permit set to expire in August 2021. Amin has applied for the property to be rezoned to make the campground permanent. But even after spending thousands of dollars on facilities to bring the campground up to the district’s standards, Amin is not fully confident that he will get the rezoning approved because of the problems caused by some vanlifers this summer.

“These are young, vibrant, fully employed people staying here; they're not people in financial despair. They are choosing to live this way, and I think for some people that's just not acceptable,” said Amin. “You're talking about making me uproot my whole life and taking away not just my income, but all of these people's homes. Where are these 45 people going to go? There's nowhere for them to go.” 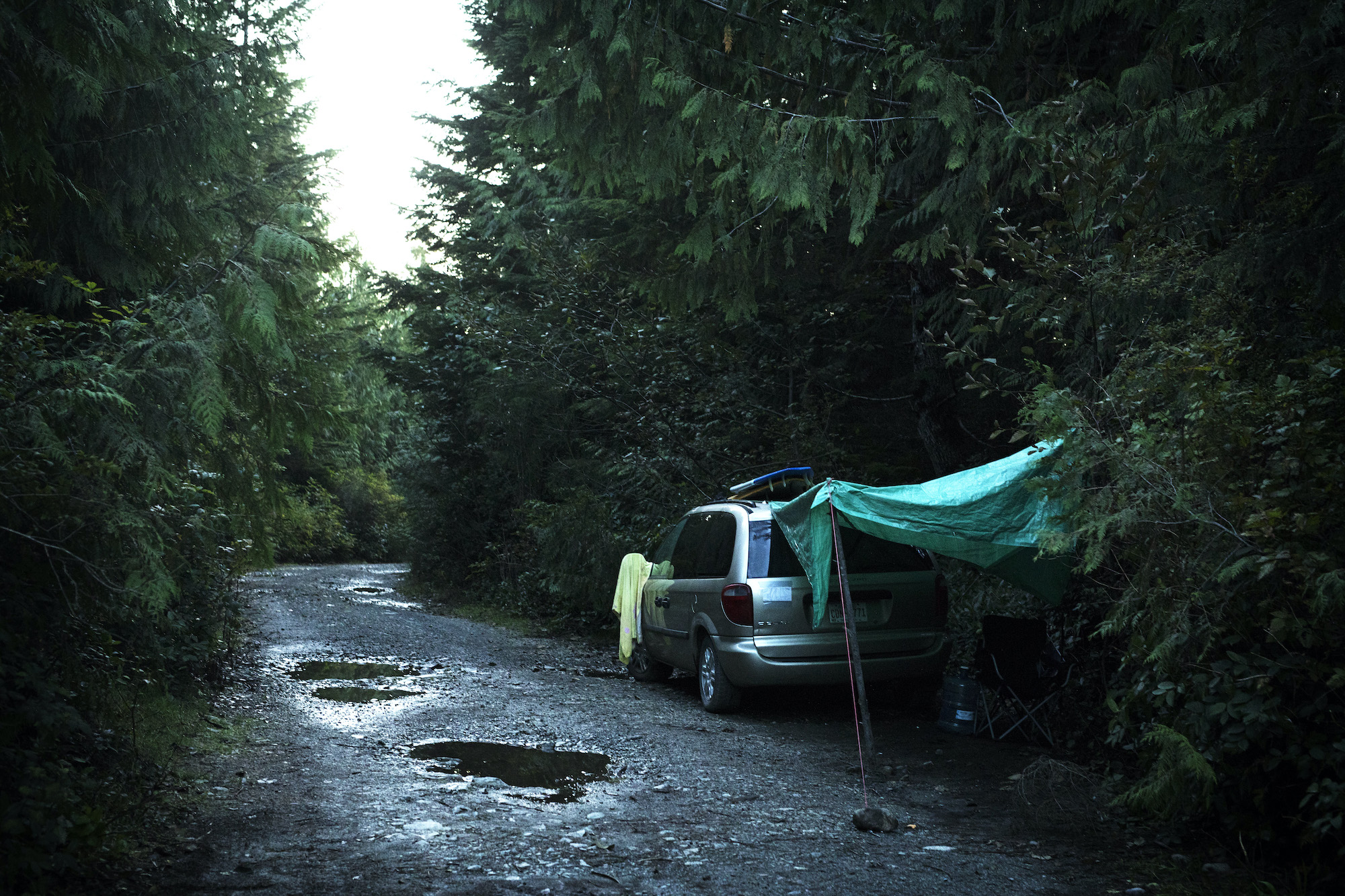 Adding more affordable campgrounds designated for Tofino’s workers could be the answer to Tofino’s housing crisis. While the district told VICE News it’s not planning to operate a publicly funded long-term campground, it’s committed to providing long-term housing. So far, there are plans to build two apartment buildings with 72 rental units combined, using funds collected from the 3 percent tax on hotel and Airbnb bookings.

But it’s hardly enough, said Amin, considering the buildings have not entered the construction phase let alone been approved. “If they are going to build another apartment building that's going to get full, you're still going to need someone like me, no matter what,” said Amin.

Bush currently lives in his RV parked on private property, which is illegal—the landowner is renting to him without a permit. If caught by the district, he risks being kicked off. 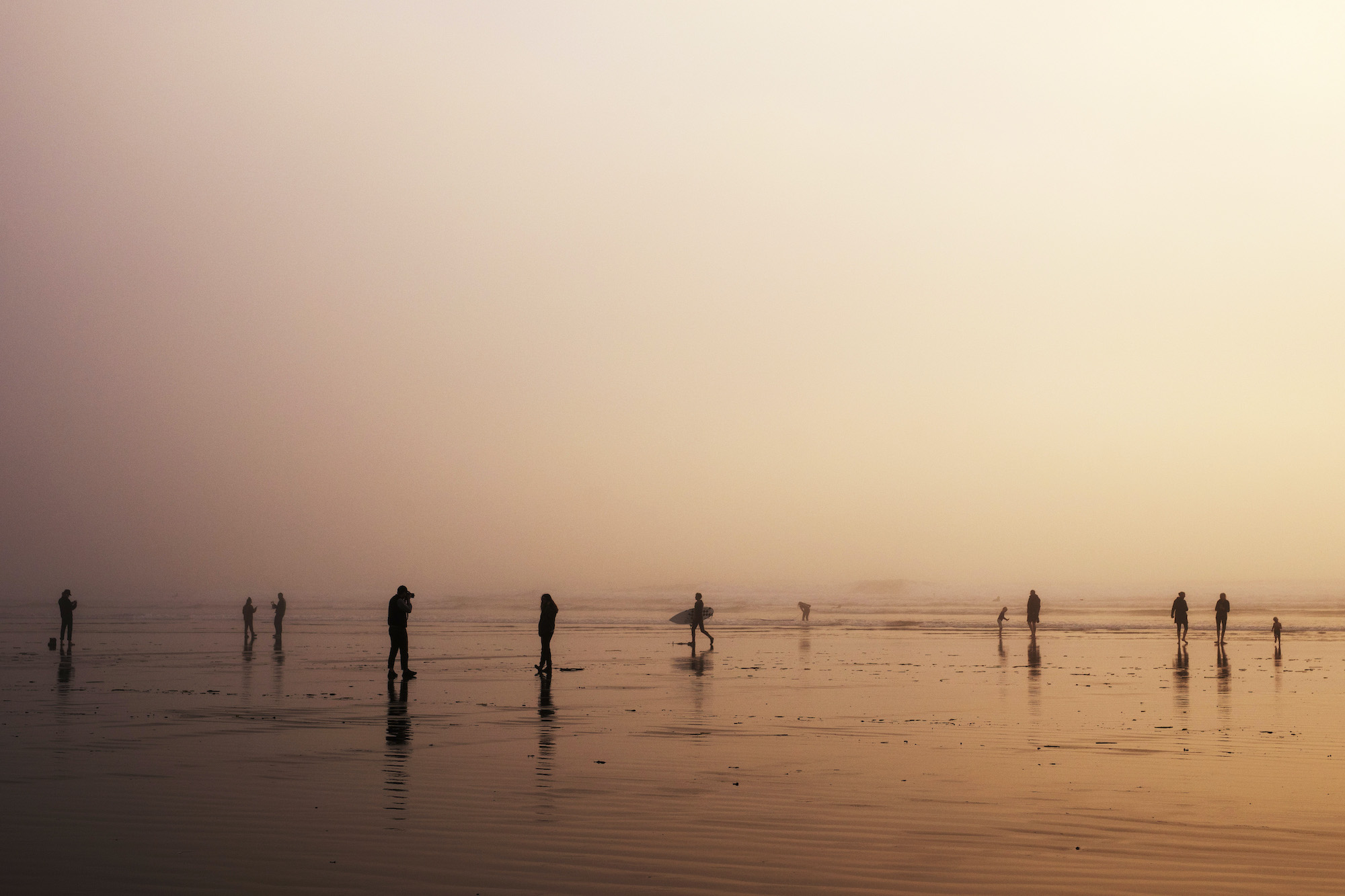 People walk along Cox Bay Beach in Tofino at sunset

He would rather be living in a room, but considers himself lucky to have found a discreet place in-town to park his RV. Many locals working in grocery stores and restaurants find themselves living on the logging roads out of the district’s jurisdiction that’s known to be littered with garbage and human waste.

As more people come to the town to escape from the world, especially when borders eventually reopen to international tourists, the district has not found a solution that preserves the natural beauty of the environment while also taking care of all of the residents of Canada’s original hippie town.

“I can understand that (the district) wants everything to look good in Tofino … but I think it’s a bit shortsighted,” said Bush. “A lot of people that are on council are not young people. They are property owners, people that own large businesses. I don’t think that they are quite in tune with how hard it is for younger people that are moving here.”