As President Donald Trump departed Washington for the final time, leaving his diehard fan base despondent, some of his most ardent supporters were busy fantasizing online about what they see as the very real next phase of the MAGA movement: The Patriot Party.

Online forums were filled with citations of a Wall Street Journal report that Trump, irritated by a perceived lack of loyalty from Republicans in the aftermath of the Capitol Hill invasion he helped foment, was considering starting his own nationalist political entity. While it’s unknown how serious the incredibly forgetful and famously fickle former president is about the idea, his followers, desperate for a light in the void, latched onto it.

“All on board the Patriot party train!!!” said one user on Patriots.win, the latest iteration of a fanatically pro-Trump message board that was booted from Reddit last year. “Cuz if ya ain't a Patriot, then yer a stinkin' commie!…. Time to draw the line that matters,” followed up another user, angered by the GOP’s inability or unwillingness to install Trump as president despite his having lost a lopsided election in November.

The Patriot Party is the talk of the boards, even among those who can’t quite decide on what it is. For some, the Patriot Party could be similar to the Tea Party, an ultraconservative grassroots movement within the GOP that became a destructive force in the early years of the Obama presidency. Others think it will be a third party that will take down both the dreaded Democrats and the possibly even more hated establishment Republicans. Either way, a great many are hoping this will be the vehicle for Trump's return to the political arena (unless, that is, the Senate convicts him in his upcoming impeachment trial and then bars him from ever holding office again). Some users are already advocating for Trump running mates.

“I think this woman should run as Trump’s VP for the Patriot party in 2024,” one wrote about Congresswoman Marjorie Taylor Greene, who has come to international attention for being both a member of Congress and an enthusiastic advocate for the false QAnon conspiracy, which posits a cosmic war between Trump and a global cabal of Satanic pedophiles.

Multiple websites for the political project have already popped up online. One site states the party will be based on “small government, Big Freedom, and America First.” At the bottom of that site, fine print warns readers, “Party and website are both works in progress. Please stay tuned.” Another, more polished site—the only one to use a .com domain—carries a message for Donald Trump, saying the domain holders are ready and willing to bestow the URL upon him.

“With a grateful heart and deep appreciation for you President Trump, we make available the usage of 'PatriotParty.com' and all our established rights to the ‘Patriot Party’ as an American Political Party and Political Party Affiliation,” reads the message. “We would be deeply honored if a member of your staff contacted us at their convenience to discuss.”

For some, the possibility of the Patriot Party extends beyond mere politics.

“Not just forming a political party, this is also an opportunity for the most courageous man on earth, President Trump, to create some social media platforms and buy into Parler to make it stronger,” wrote one person on the latest TheDonald site. “The battle has just begun.” 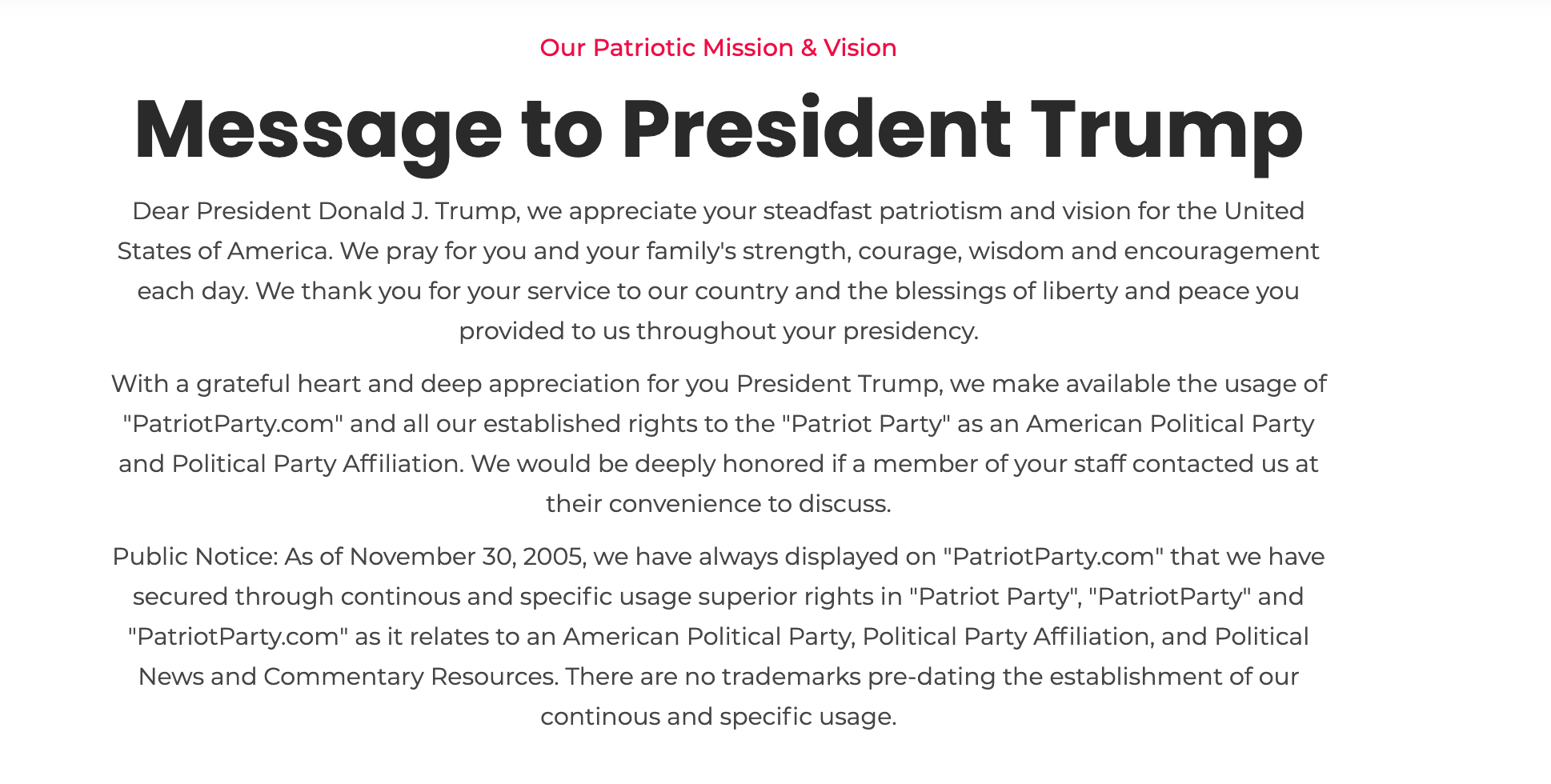 On the encrypted messaging and posting app Telegram, gung-ho supporters started an account for the party, which has already accrued thousands of members since its inception earlier this week. The group is hoping to aid its followers in creating a “Patriot Party” in each of the 50 states. Currently, the Patriot Party in Pennsylvania seems to be best organized, with an “awareness march” apparently planned in early February in Harrisburg.

Regardless of who is running things, the nascent movement is already embodying one key component of Trumpism: the art of the grift. Though the Patriot Party isn’t real or (as of yet) supported by Trump, you can already buy a wide variety of merchandise. On Twitter, the growing Patriot Party account, established in December, seems to have been created just to hawk t-shirts to upset Trump fans.

“JOE WON… CHINA WON…” reads one of its tweets before immediately shilling its wares to the crowd. “New Design! Made In America! Ships Today!”

Search results for Patriot Party merchandise on Etsy run for eight pages, with the majority featuring an American flag in the shape of a lion—a seeming allusion to the idea that lions don't concern themselves with the opinions of sheep. Some online are warning their fellow Trump enthusiasts not to fall for what they believe to be an obvious grift, but the growing market for merchandise suggests not everyone is listening.

Likely unknown to many of the feverish Trump enthusiasts touting the idea of an ultranationalist Patriot Party, the name was used fairly recently in American history. The Patriot Party of the 1960s and 1970s was a splinter faction of the Young Patriots, a socialist coalition of poor white “hillbillies” from Chicago's Uptown neighborhood who joined forces with the Black Panthers in Chicago to create a multiracial movement clamoring for improved labor rights.

“We come from a monster,” William "Preacherman" Fesperman of the Young Patriots told attendees at a Conference for a United Front Against Fascism, as Michael McCanne wrote for Jacobin. “The jaws of the monster in Chicago are grinding up the flesh and spitting out the blood of the poor and oppressed people, the Blacks in the South Side, the West Side; the browns in the North Side; and the reds and the yellows; and yes, the whites—white oppressed people.”