Police are asking for information about a man who wore what appears to be a Ku Klux Klan hood in broad daylight in northern Alberta.

A woman posted a photo to Facebook on Jan. 8 of a man wearing a pointed white hood outside the post office in Grimshaw, a town of about 2,700 people five hours northwest of Edmonton.

“THIS IS NOT FUNNY, CLEVER, CUTE or even REMOTELY acceptable. You should be ashamed,” the woman wrote on a Grimshaw community Facebook page.

Twelve members of Alberta Humanitarian Initiative—a collective of local organizations from across the province—travelled to Grimshaw on Saturday to support racialized community members who felt threatened by the brazen display of a notorious white supremacist symbol.

Organizer Taylor McNallie said the group received dozens of messages from residents saying they don’t feel safe because of racism in the town. The group sent letters to the mayor and taped them to the post office and town hall Saturday afternoon, alongside signs reading “Black Lives Matter,” “Hate is not welcome here,” and “Condemn white supremacy.”

“The people who are there are too scared to come out and stand up for themselves, because they have to keep living in these communities and they know how their community members are, that they’re just going to keep getting bullied and experiencing racism,” said McNallie, who grew up in the small Alberta towns of Cremona and Didsbury.

“It’s never just one instance; it’s every day, all day, for all of your life.” 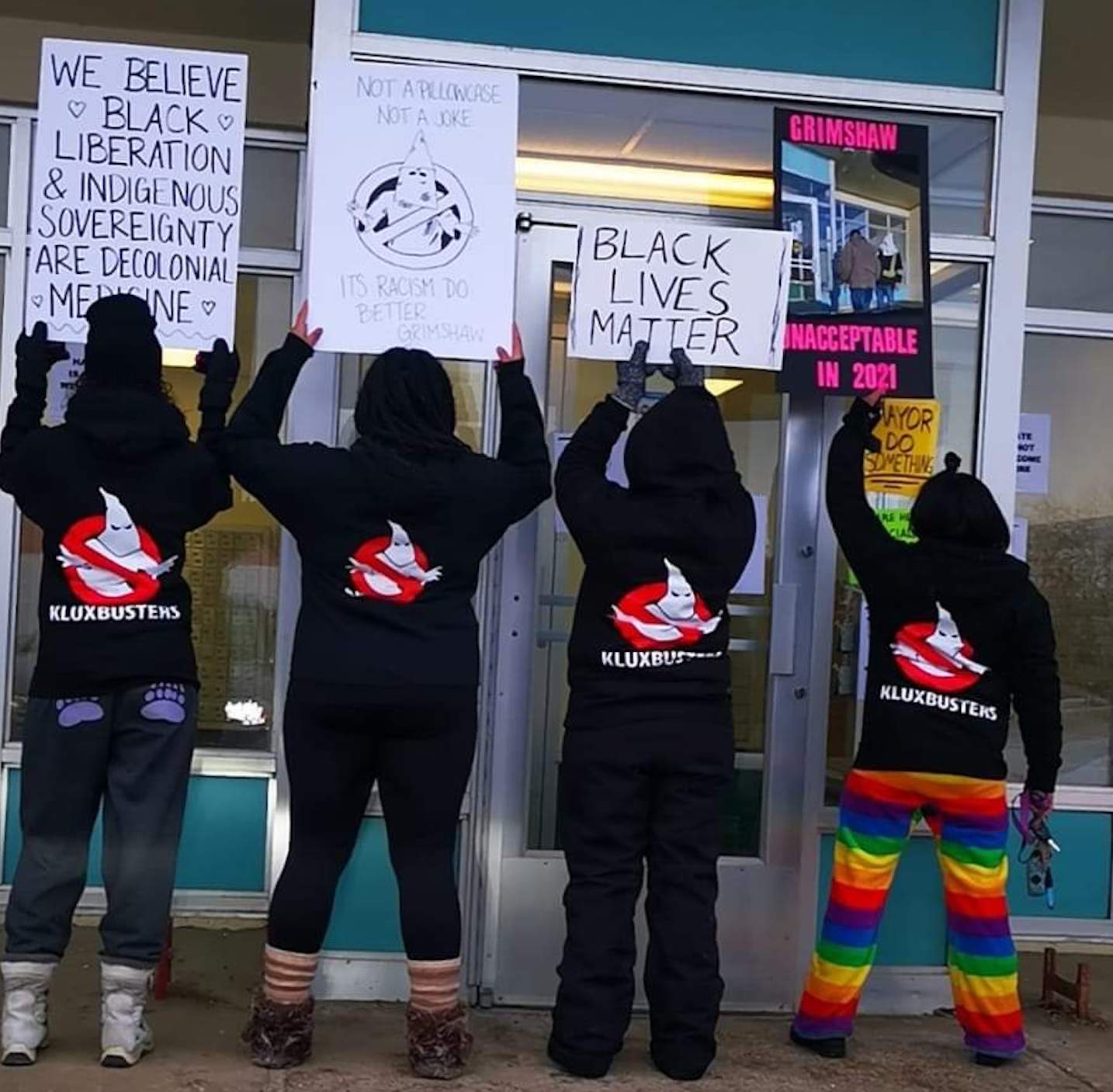 McNallie said reactions from residents were mixed on Saturday. While some showed gratitude for the group’s anti-racism efforts, one woman ripped down their signs and called the police. Officers showed up but allowed the protest to continue.

Grimshaw residents and police remain tight-lipped about who wore the hood.

Peace River RCMP said two weeks ago they had identified the man, but on Sunday they were still not revealing his name.

Under the Canadian Criminal Code, it is an offence to wilfully promote hatred against a specific group using a gesture, sign, or other visible representation. While police have not pressed charges, Alberta RCMP spokesperson Cpl. Teri-Ann Bakker said they “have some leads that they are looking into right now” and are asking anyone with information to contact Peace River RCMP.

McNallie said several residents approached her on Saturday to say they know the man, claiming he wore the hood as a joke, has done it multiple times, and is not racist.

Numerous commenters defended the photo on the community Facebook page. One person said it was the “funniest thing, the most clever thing and the cutest thing I have ever seen,” while others flippantly suggested the man was just complying with COVID-19 mask regulations. A few commenters condemned the hood, calling it “pure racism” and “absolutely awful.”

The same week the photo was posted, McNallie was sent two photos of nooses hanging on farms in Alberta—one in Dinosaur Provincial Park and another near Beiseker—and a video circulated on Twitter showing men shouting “Sieg Heil” and “Heil Hitler” at a small gathering outside Calgary city hall.

In September, McNallie was at an anti-racism rally in Red Deer that ended prematurely after it was stormed by counter-protesters, including members of hate groups. One man threw a punch that was caught on video.

Grimshaw Mayor Bob Regal, who VICE World News attempted to reach on the weekend, wrote a Facebook comment on Jan. 8 that condemned the man in the photo as well as the people criticizing his town.

“The Town of Grimshaw and its Residents in no way finds (sic) this type of behaviour appropriate or acceptable along with the insinuations made that have been made (sic) by several commenters that Grimshaw is somehow a racist community,” Regal posted.

Grimshaw’s chief administrative officer said Monday morning that the town council is drafting a statement in response to Saturday’s protest.

McNallie said she doesn’t care to know the identity of the man who wore the hood, but would like to see him publicly acknowledge why wearing the white hood is harmful.

“I just want responsibility and accountability.”