Of all the ways to repurpose a confederate monument, it turns out a toilet might be among the most practical.

A group called White Lies Matter claimed responsibility Monday for taking the Jefferson Davis Memorial Chair—apparently worth $500,000—from a cemetery in Selma, Alabama, and threatened to turn it into a toilet unless the United Daughters of the Confederacy hangs a banner bearing a quote by Black Liberation Army activist Assata Shakur.

Statues of confederate soldiers, political leaders, and other historical figures have been disappearing across the globe since last spring, when George Floyd’s death at the hands of police sparked conversations about systemic racism and who should be honoured in public spaces.

Some have been ripped down by protesters, others carefully removed by municipalities. Many now sit in warehouses in secret locations while bureaucrats tiptoe slowly toward the path of least resistance.

Several cities told VICE World News they are still early in the process of deciding what, if anything, to do with their monuments. Storing them takes up valuable space, but restoring them is expensive. Selling white supremacist monuments to private citizens presents a legal and ethical quandary.

‘Tens of thousands of dollars’

Many of the toppled statues are still covered in graffiti and detached from their platforms. Some were thrown in lakes or set on fire. Montreal’s sculpture of John A. Macdonald, Canada’s first prime minister and the architect of the residential school system—under which police took Indigenous children from their families and put them in government-run boarding schools—was decapitated and photos of his bronzed head made into stamps. 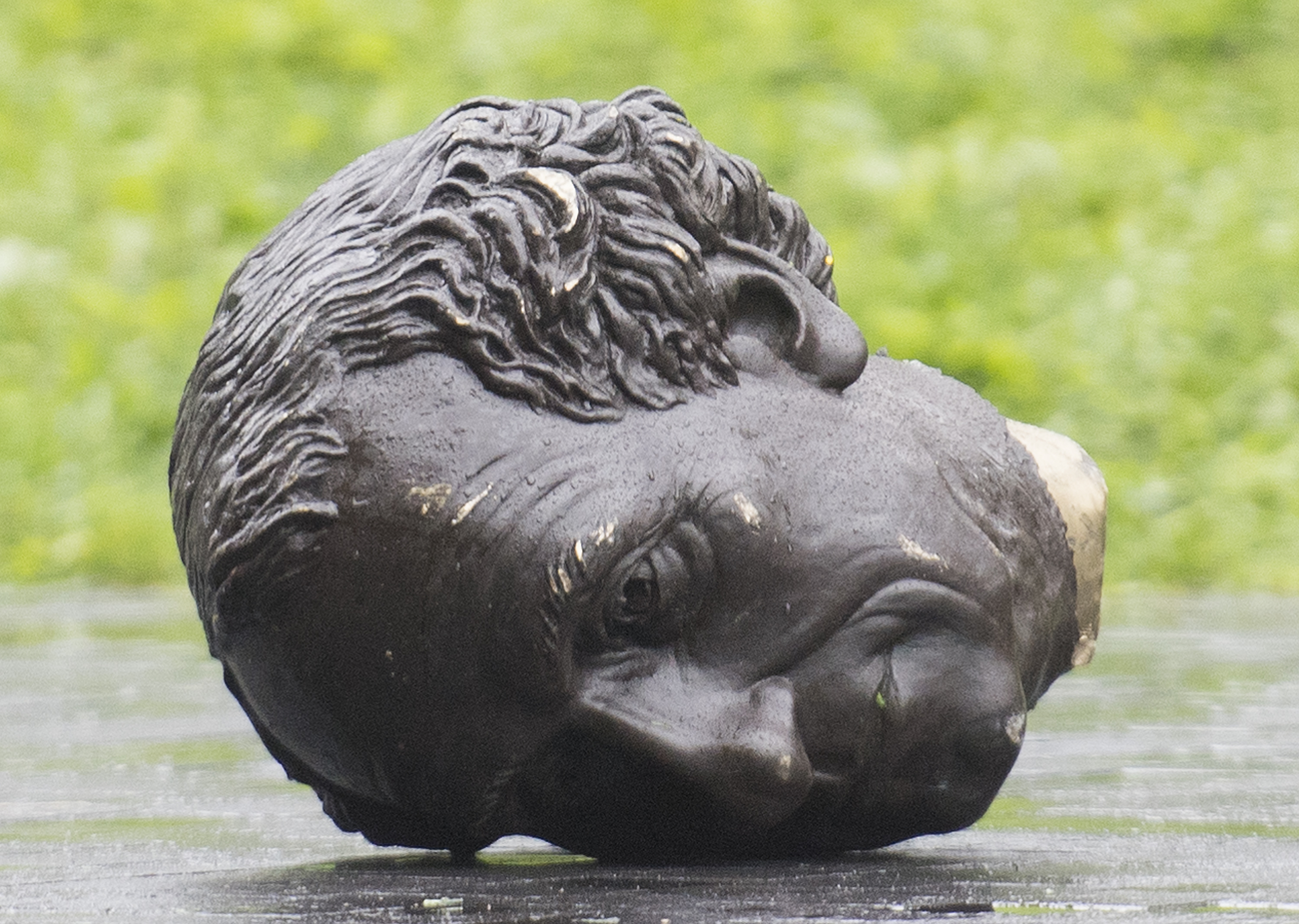 In Macdonald’s case, Spafford-Ricci said restoration and relocation costs could easily exceed $100,000. The statue would have to be cleaned and the prime minister’s head welded back into place before restoration work could even begin. Then, there’s the matter of preparing the site for reinstallation, which can include things like landscaping, lighting, security, walkways, and barriers. The whole process would take months.

“It’s always tens of thousands of dollars. It can be more than $100,000 to do something like that. It’s always more to do structural work, where a head comes off or an arm is sawed off.”

All for a statue of a man that, as Charlottetown, Prince Edward Island, is learning, will likely be vandalized over and over again.

The Southern Poverty Law Centre said in a February report that 168 confederate symbols were removed across the United States in 2020 and more than 700 confederate monuments remain on public display.

Some cities found a weird sliver of hope in the fall when former U.S. president Donald Trump proposed a National Garden of American Heroes that would venerate 250 random historical figures including confederate soldiers, politicians, and celebrities. Heather Kent with Portland’s Regional Arts and Culture Council said the city got “a lot of interest” from the National Endowment for the Arts and the Department of the Interior looking to acquire some of the city's six removed statues for the garden.

Those calls stopped in November, however, and President Joe Biden is unlikely to follow through with Trump’s vanity project.

In 2017, following a violent white supremacist rally in Charlottesville, leaders in Memphis, Tennessee, sidestepped a state law protecting Confederate memorials by selling two parks to a local nonprofit for $1,000 each—with the understanding that the nonprofit would remove the parks’ confederate statues.  The state government retaliated by cutting $250,000 from the city’s funding.

Dallas, Texas, sold one at an auction around the same time, fetching $1.45 million for a particularly valuable depiction of confederate general Robert E. Lee and another soldier on horseback by renowned sculptor Alexander Phimister Proctor. Two years later, the imposing monument turned up at a golf course owned by oil and gas billionaire Kelcy Warren. 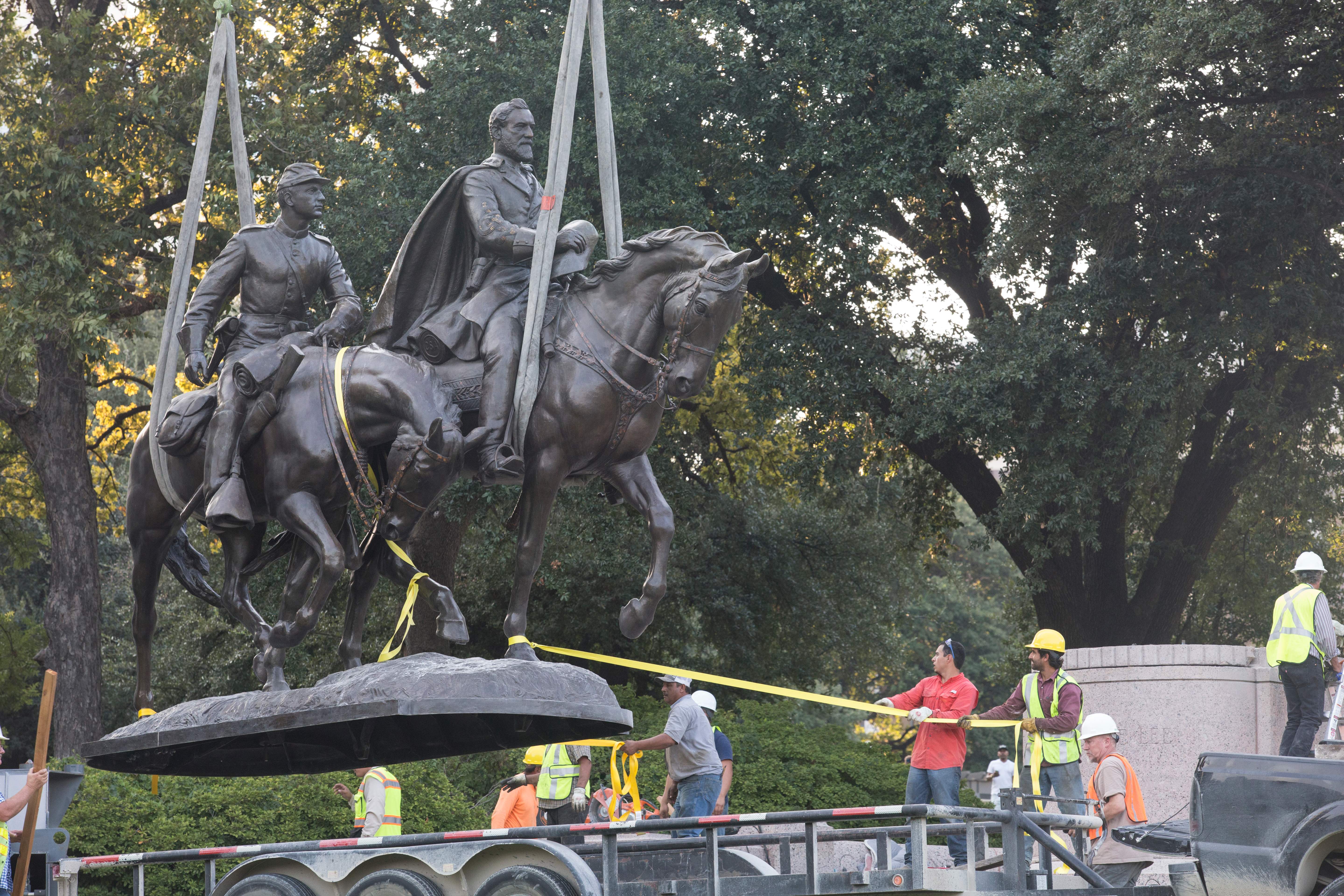 This statue of Robert E. Lee, which used to be on display in a public park, now sits on a private golf course in Lajitas, Texas. Photo by

In Houston, Texas, the Museum of African American History and Culture put a vandalized confederate sculpture in its interior courtyard last fall to present it in a more critical context.

Bristol, England, is planning a museum exhibit this summer featuring the still-graffitied statue of slave owner Edward Colston. The city sent divers attached to ropes to fish the statue out of the water after protesters dumped into a harbour last June.

‘Any number of scenarios is possible’

Rachelle Axel with the San Francisco Arts Commission said the California city is launching a committee in April that will meet for several months before deciding what to do with its four downed monuments and 100 more in the city’s art collection. San Francisco might put some back up with additional context, replace them with programs to help heal communities that were traumatized by the old ones, or take down even more.

“Any number of scenarios is possible,” Axel said.

Any decision made at this point is bound to piss people off. Documents obtained through Freedom of Information Act requests show Seattle mayor Jenny Durkan was bombarded with angry emails after protesters destroyed a United Confederate Veterans Memorial in July, and during the Capitol Hill Occupied Protest in the preceding weeks.

Some called her a “coward” and a “disgrace” or called for her resignation. One wrote, “You must be a communist and should go back to the hole you crawled out of.” 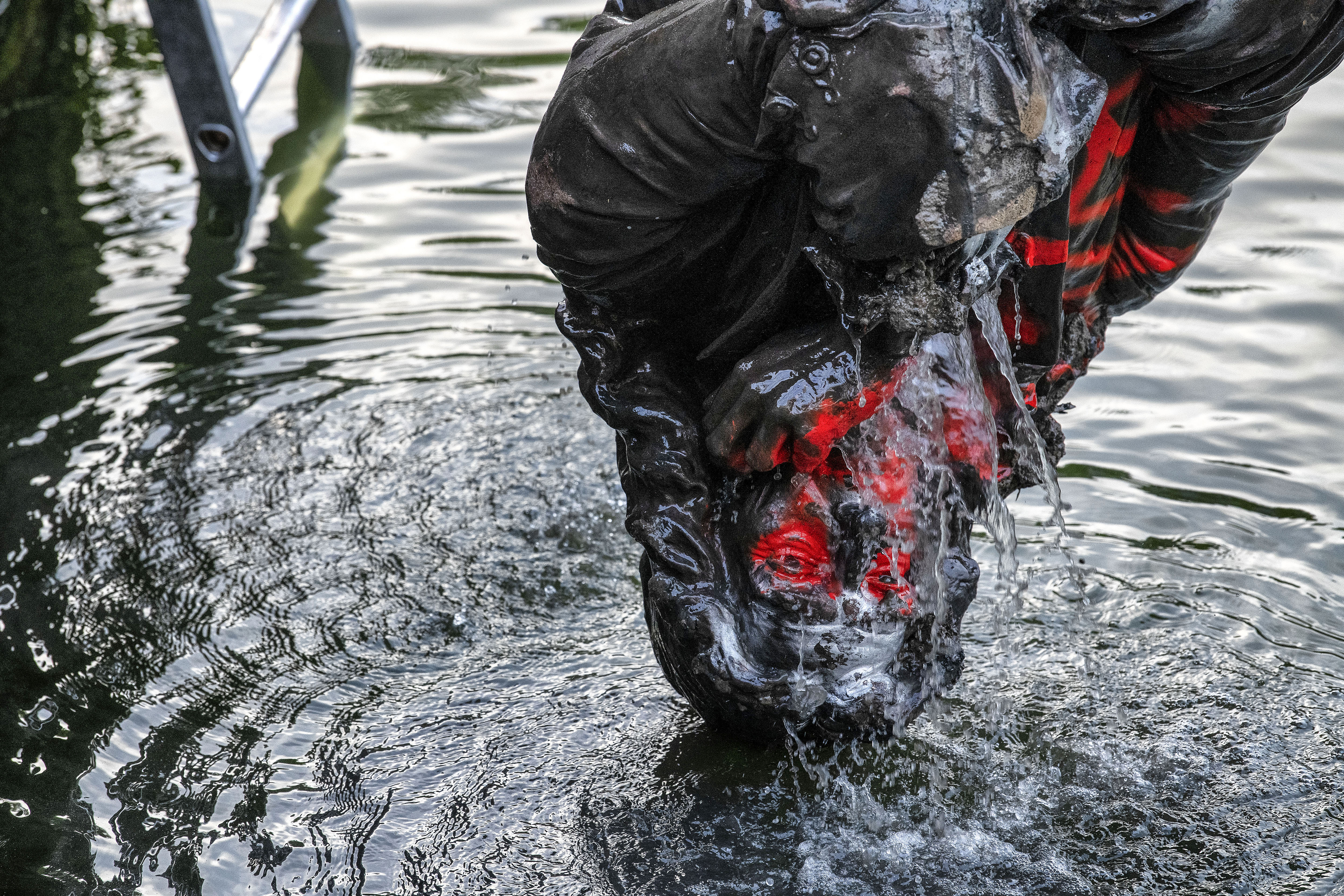 The statue of slave trader Edward Colston is pulled out of Bristol Harbour a few days after it was thrown in. Photo by Andrew Lloyd/Getty Images

But while these sculptures have become a nuisance for municipalities, that doesn’t mean nobody wants them.

“I’d be interested in about any of them, perhaps, if the price isn’t too outrageous,” said Donnie Greenwood, a 74-year-old former popcorn farmer in rural Kentucky.

Greenwood wants to put some in the former Camp Breckinridge in Union County, to sit atop buildings that once housed Nazi prisoners of war. He envisions a park filled with bronze soldiers perched high in the air, using chimneys of the crumbled POW facilities as pedestals.

Greenwood said he’s written a dozen cities and “may have offered one city $1,000.” He doesn’t particularly care what the statues represent, and suggests even changing some of the faces.

“Just because that (statue) was Robert E. Lee or somebody sometime, it could possibly be removed and put somewhere else and could become a statue representing someone else. Why couldn’t it be?”

‘Melted them down or recarved them’

“The Greeks, the Romans, the Egyptians, all of them took sculptures that they didn't want to use for their original purpose anymore and either melted them down or recarved them to make something else,” Beetham said.

Melting the statues down would end their miserable warehouse confinement and ensure they never go back up, but it could be a political nightmare.

Beetham disagrees with selling monuments to private bidders, saying it defeats the purpose of taking them down in the first place, but she said there is no way such a massive volume of metal could be absorbed by museums and galleries.

The monuments are logistically incredibly difficult to move, given their deteriorated states and sheer size—some stand more than 60 feet tall.

Most of the monuments are likely to remain stashed in warehouses for years, safe from further damage but not from souring public opinion against the powerful people they depict.

Realistically, most will never be seen in public again.